"Arguments of convenience lack integrity and inevitably trip you up."
-Donald Rumsfeld 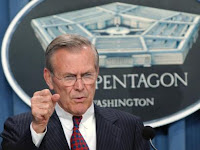 I'm no expert on military history or tactics. I don't have any inside information on the Pentagon or how the Army ought to restructure to face new challenges. Donald Rumsfeld was, and did. He made a lot of enemies while he was Secretary of Defense and before that. Rumsfeld was a crusty old man who wouldn't back down, and I bet he was a pain to work with.

But I liked him, I liked him a lot. He gave the kind of answers to the press that I think I would in his position. He didn't put up with any crap, he took the fight straight to them. At first, the press liked him too. They found his attitude refreshing, his candor valuable, and his straight shooting welcome after decades of spin doctors and diplomats.

Then they started to hate him because he was part of the Bush administration package deal and it became popular to hate President Bush and all associated with him. Reporters are no less followers than most people, and they tend to jump on the bandwagon at least as readily as everyone else.

But you could always count on Rumsfeld to say exactly what he thought, without deception, and openly. If he thought you were full of crap, he'd tell you. Recently he suggested that Israel would probably be better off if they wouldn't share any of their plans with the Obama administration. Honestly I think everyone would be, its pretty obvious that the president is more than willing to blow any cover, share any secret, or expose any operation if he thinks it will help him get reelected.

Donald Rumsfeld left office with virtually no friends. He was hated by the Pentagon establishment, hated by the press, hated by the left, hated by the Democrats, and blamed for the lack of progress in rebuilding Iraq. Maybe he was to blame, maybe he stonewalled ideas to add more troops or change tactics.

I suspect probably not, as President Bush had shown he was willing to do what his generals wanted regardless of political pressure. I think Rumsfeld was a symbolic sacrifice to show a change in direction in 2006 rather than an impediment that had to be removed.

Rumsfeld recognized earlier than most that the military structure built up after Vietnam and the doctrine developed in the 80s to face Soviet forces in Europe was dated and had to change. Instead of readying big armies to face other big armies on the field of battle, modern warfare is about skirmishes with small, fast armies facing irregular forces.

The fight today is about information, speed, and finding the enemy more than facing them and moving troops around on a battlefield tactically. Sure, we can do that, and it might come around again, but that's just not what we face in modern warfare. So Rumsfeld wanted to change things to match that reality.

We do not need huge standing armies any more. This is why the draft is such a bad idea; modern warfare isn't about throwing as many men as possible at your enemy. Its about shooting fast, accurately, and quickly at exactly the right spot. Small, mobile, and incredibly well trained is the key.

But changes like that are always unwelcome. It threatens people who have jobs based on expertise in the old and dated. It upsets people comfortable and familiar with the old way. It frustrates people who made a career with the old ways and who don't want to have to learn new. It challenges the system of rewards and kickbacks set up to purchase certain kinds of materials and work with certain friendly suppliers.

So when Rumsfeld gained power to make those changes, he faced not just resistance to change but real anger and resentment. The change was going to happen one way or another, but the guy who first tries to make it happen is always the one to take it in the teeth.

Maybe Rumsfeld was a bad guy, maybe he took his ideas too far. Maybe his smaller, leaner army idea did cause problems in rebuilding Iraq. I don't know as I said. But this is sure how it looks to me. It just annoys me that so many on the right seem to hate the guy, like they have been influenced by the left's incessant campaign of hatred toward the entire Bush administration.
Posted by Christopher R Taylor at 9:39 AM