"Do you feel that being Christian has become almost a bad word in a country that's still predominantly Christian?" 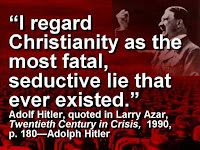 It isn't easy to be a Christian in the modern world. Previously in America, Christianity was presumed, of at least so much a part of the culture and history it was accepted without concern. While several of the Founding Fathers such as Thomas Jefferson and Benjamin Franklin were not Christians, they were heavily influenced and informed by a Christian worldview. In other words, they looked at life with certain assumptions, such as that a God existed, that He was good and all powerful, and that He created the world.

Even people who were not Christians essentially agreed with most of the Christian ethic, so that ideas such as homosexual "marriage" were derided and considered awful. In the last forty years or so, that has changed. Now an atheist, naturalist philosophy is dominant, and basic assumptions about ethics and reality have along with it. Gone is the presumption of a creator who dictates right and wrong.

And that can be very uncomfortable, at best, for a lot of Christians. Now western society considers basic Christian ethical positions to be not just different but weird, even wrong. It isn't that they've achieved some greater cosmic understanding of reality, they've just changed worldviews.

On CNN, Piers Morgan interviewed Jeff Foxworthy and bombarded him with questions about Christianity:

Here's the thing, I'm a Christian, you're a Christian. But I spent the last 18 months at CNN, because of the Republican race to be nominee primarily, dealing with a lot of issues where the Christian element of the Republican party get a good kicking, because either they said something silly or inflammatory or whatever it may be. As a Christian in America, a high-profile one, how do you feel about that? Do you feel that being Christian has become almost a bad word in a country that's still predominantly Christian?

By the end of that long unbroken series of questions Foxworthy was smiling, probably because he wondered which question Morgan actually wants him to answer. Foxworthy is a comedian, so I'm sure he had a pretty entertaining answer, but my interest is in the line of questioning by Morgan, which went on like this:

Part of the problem, it seems to me, is when I've had real die hard Christians on the show, Kirk Cameron was a good example, somebody who is probably not a bad guy -- I don't know him, but he's probably not a bad guy. And he had his believes. And he absolutely fundamentally believes homosexuality is a sin, for example.

But it was the way he talked about homosexuality, it was the way he talked about it, as if it was the end of the world as we know it, an abomination, et cetera, et cetera. That – it's that that grates with people in modern America, I think. It's the language deployed by some Christians about their beliefs which are just inflammatory.
...
How literally should people take the Bible? And should the Bible be an evolutionary thing, rather like the Constitution was amended a few times?

This is pretty heavy stuff to be firing at a comedian, and I'm sure Foxworthy wasn't very happy to be grilled on theology, culture, and other people's minds. On the other hand I'm not a comedian. And I see a lot of basically problematic ideas in these questions.

It seems that, despite claiming to be a Christian, Piers Morgan is more concerned with how culture perceives Christianity and that society should inform religion rather than the other way around.
What's going on here is the effect I've written about before: there can only be one. A given culture or society will always have a dominant religion, it is impossible to avoid. The only question is how greatly that religion will dominate the culture, not if it will. For over a century, Christianity was that religion in America. Now it is this secular relativist naturalism, which rejects the metaphysical, rejects absolutes, and pretends that all that exists is what we can sense, measure, and examine with science.

Morgan's statements may be driven by a desire to find a way that Christians can be less shocking and possibly offensive to the culture at large, but in truth, he's reflecting the dominant religion of western civilization. He's suggesting that to survive or be useful, Christianity subsume its self to this religion, adapt and change its basic tenets to better fit this religion.

The problem is religion is at its heart about truth, especially Christianity. Christians believe that the Bible, the Word of God, is absolute truth. That means it does not change to fit a given culture's whims, that it often challenges readers and what we want to be true, and that everything we believe and understand about reality is built on that foundation.

The Bible is not a textbook on science, it does not tell how to change a tire. But how you go about science and why you change a tire is influenced by what you believe and by what you think is true. If you, for example, reject the very idea of the possibility of a creator, then you will not allow that as an option when you do science. This means that, no matter what your experimentation and any evidence shows you, you cannot allow the idea that anything was created. Conversely, if you believe that the truth is given us through the Bible, then how you change a tire will reflect the truth in that book. You should act more humbly, more willing to serve, more grateful you have the ability to make that change, and so on.

Suggesting the Bible be something we can "amend" when the majority decides it should be like the Constitution is based upon the presupposition that there is no absolute truth. That everything is flexible and changeable by democratic demand. Sure, the Bible condemns homosexual behavior as sin, but most people disagree, so we should just edit those parts. They're old anyway and we've evolved past that. Once the majority changes their mind, well we can change that old Bible again.

As I've pointed out before, morality by popular vote is how we got slavery, Auschwitz, and women treated as property. Morality based on the latest whims of culture cannot by its very nature have limits, it simply becomes what people decide it ought to be. And that's how we got where we are now.

Because when you redefine morality based on people's desires, it always goes in one, and only one direction: downward. It works like this; each time a new challenge comes up, the majority of people will desire to be the most free to do whatever makes them happy, comfortable, and live longest. So if your choice is between extramarital sex or not, people will tend to ignore marriage.

And all the structures that teach morality in this system will be pressured to avoid teaching any morality that upsets or offends a significant portion of that society. That means any moral instruction given will tend to be the lowest common denominator: what the largest number of people can agree on, even if it is blatantly contradictory. The more this proceeds, the more basic, hedonistic human urges become the deciding factor.

That's how you get people who oppose the death penalty for crime (that could be me in that chair!) and support abortion (that could be my baby that was a mistake and would limit my fun!). Over time, each limitation is eased or eliminated as culture incrementally steps more and more toward unlimited personal pleasure and options. Each step takes the culture further and further into license, away from any limits.

This is why I have written several times to point out that what we consider awful and wrong now will without possibility of exception become acceptable, even demanded unless the basic worldview of this culture changes. It is considered awful and disgusting to lust after children today; such was the opinion of homosexuality, sex changes, and so on only a few decades ago. This process is absolute and inevitable. It will not stop because the present culture thinks that's too far; they thought that about things demanded as acceptable today.

Christianity, like most religions, offers a more stark and limiting ethic. This is right, this is wrong, even if you happen to like it or be inclined toward it. Christianity has absolute lines which cannot be crossed or blurred. Certain things are acceptable, and certain things are not, period.

Because of that, as the culture around it degrades, what was once normal and accepted has become "silly or inflammatory" as Piers Morgan puts it. A simple statement of absolute ethical position such as "homosexual activity is sinful" is considered horrible, even sinful its self in modern culture. But if that statement is true, then it doesn't matter what people think on the issue or how upset they become. The truth is an absolute defense.

What modern culture will inevitably have to face is whether or not they want to continue on this path, because as time goes on, even the people who want to physically attack Kirk Cameron will be confronted with something they just cannot go along with in their children or grand children.

A culture cannot survive without absolutes that everyone agrees upon. It cannot lack a foundation for fundamental philosophical and ethical decisions or it will in time decay so much as to be unsustainable as a culture. That collapse will take down industry, education, art, liberty, and all the other trappings of a civilization with it.

So the question should be this: Piers Morgan, do you think society is going too far, and how do you draw that line?
Posted by Christopher R Taylor at 7:55 AM