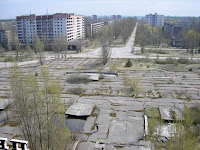 Why do we even have cities any longer? If you think about it, all the reasons cities came into being have slipped away in the 21st century. Cities were primarily a place to be safe from marauding bad guy, invaders, and enemies. You were safer inside the walls than without. Cities offered opportunities for education, employment, and socialization. Cities were founded by people gathering to take advantage of the presence of others, and to be safe.

Cities offer culture that is rarely available elsewhere, but that wasn't why cities came into existence. It was a byproduct of the density of people and diversity of population. Operas, night clubs, art galleries, parks, zoos, and so on all are city constructions. You can go five blocks in New York City and find clothing stores with Nairobi themes, restaurants with Egyptian food, and furniture stores with Chinese culture.

Yet I can get all that from my home through the internet. True, its not the same as being there, but I don't have to fight through traffic, pay for parking, endanger myself with muggings and carjacking, breathe smog, and pay exorbitant rent for the privilege.

I wonder if Detroit isn't so much a disaster as just a forebear. This is where cities are headed: why live there any longer? Will they dissipate over the next few decades as high speed internet gets easier to connect to in rural areas? Will the cities just drain out people into the suburbs and surrounding areas as people just give up on lousy politics, corrupt government, crime, excessive cost, and smog?

It seems likely to me. There's not much reason to actually stay in a city other than the romance of being urban. And urban lifestyle seems to lack any real future. Self destructive, narcissistic, constructing nothing, almost always working jobs that produce nothing tangible, and without thought of the future or offspring, its a culture that commits suicide. Being urban for the sake of being urban might appeal to the young and hip, but for how much longer?
Posted by Christopher R Taylor at 8:39 AM

But the new urbanism would love to herd you into tenements.