"I worked hard all my life and played by the rules and they allowed this to happen." 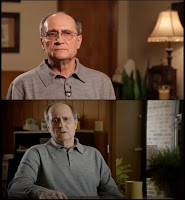 A Political Action Committee ran an ad in which a guy claimed his wife died of cancer because Romney laid him off at work and he lost his insurance. This is at best a tenuous claim, but it had a certain emotional appeal that less-savvy or less-informed voters might be swayed by.

Its all part of the Obama administration's effort to portray Romney as a wealthy cruel businessman who exploits people and is a heartless outsourcer of jobs. When your record is as bad as the economy, you work with whatever you can, even if you said you would be a one-term president if things didn't turn around by last year.

Now, when the COBRA program was pushed through congress by Ted Kennedy (D-murderer), the entire argument given was that it had to pass so people would keep insurance after they lost their job. Apparently it was all a bunch of baloney. But there are deeper problems with this ad.

So we have found out in a matter of days that the ad is almost totally false from beginning to end.

The Obama administration is claiming they knew nothing about the ad, never heard of it, don't know any details... except the Obama campaign website has the details of the ad and has since May. They claimed they never knew Soptic, but recently were forced to admit they had worked with him before.

But all that matters is that people who pay no attention to politics or the news see the ad and are emotionally swayed. The truth? Well that gets in the way of a lust for power. This is why I just ignore political ads. They're all at best half truths and distortions, played for emotion or fear instead of facts. You don't learn anything useful about either candidate in 30 seconds.

In the end, I think that more people know about the controversy around the ad and the corrections than saw the ad to begin with.
Posted by Christopher R Taylor at 7:30 AM

Take a Valium and get ready for the sauce! France 1968 Romney drove on wrong side of road, woman's death resulted! Romney lay in comma for days and suffered brain damage!