"The Jeffersons taught us about what American was and could be" 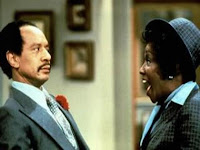 Remember The Jeffersons? I never watched it much because I almost never watched TV as a kid, but I remember seeing a few episodes. It was funny enough, but didn't really catch my interest when there was so much to do outside.

The Jeffersons was a spinoff of Archie Bunker, with a black guy who worked hard and lived the American dream, and was a friend of Archie. When he "moved on up" after a long career as a dry cleaner, George Jefferson got his own show and it ran for eleven seasons from 1975-1985. At the height of its popularity, The Jefferson pulled in a third of TV viewers.

The show was about the usual tough times of living, with relationship and job and family problems, played for humor and some minor social content. The family was ordinary and had usual experiences, with little political content except for the first few seasons.

Iranian immigrant Shervin Malekzadeh and his family were very affected by this show in particular. In The Atlantic, he tells the tale:

Already, intuitively, we understood that the story being told at 185 East 85th Street was our own. Movin' on up meant moving away, an agony recapitulated each week during the show's opening credits, by the image of Louise wiping away her tears, the close-up of George gripping his wife's hand. George and Louise had left the old neighborhood for the new, crossing over from Queens into Manhattan on the 59th Street Bridge for a better life on the other side. Making it in America, making it in terms of the American dream, was compromised for George and Louise by their loss, and it was here that The Jeffersons showed us where the American and immigrant experiences converged. Because of who they were, and where they came from, the Jeffersons could never feel like they fully belonged in tony Upper East Side, or what my father liked to refer to as Grey Poupon society. The past pulled on them, and although neither ever forgot where they came from, the longer George and Louise stayed away from the old neighborhood the less they knew of their old selves.

For a family of Iranian immigrants, The Jeffersons was a portrayal of outsiders trying to make it in America and doing it by being American.

Now, while the Jeffersons was one of the prototypes of the "man is always an idiot who has to be saved by his brilliant all-capable wife" theme, it was at least unique at the time in that, and George had his dignity - and was a very successful, capable man who achieved a lot. That show was not uncommon in the themes of family, hard work, relationship, and the American dream.

The show that changed all that was Married With Children. It didn't set out to do so, it was just an attempt to be a black sheep, to be the different sitcom. Al Bundy and his messed up family was deliberately the opposite of what we've come to expect from a sitcom family, and it worked because it was funny and because it was so different.
The problem is, every sitcom after that became this anti-sitcom. None of them had a normal family, none of them had a good relationship. None of them were typical or pro-American. They all had to be a mess, with divorced parents and gay couples and so on. Instead of being the outlier, Love and Marriage just became typical.

Shervin Malekzadeh points out that

Television is regularly blamed for the decline of civic and associational life in this country, but during the '70s and '80s, before basic cable and satellite scattered viewers into a million little demographics, weekly broadcasts of a show like The Jeffersons provided a shared, collective, and national experience.

And that shared experience was pro-American, pro-hard work, and pro-family. Now with a flock of bitter ironists and anti-nationalists in control of media, the entertainment we get is anti all of that. You're an idiot for working hard. Families are always awful and messed up. Parents always hate their kids. Kids always hate their parents. Couples cannot get along and divorce is the norm.

Instead of supporting and reinforcing culture, television shows are deliberately attacking and tearing down what was once American culture. What would an immigrant today learn from watching the most popular sitcoms? Here are the most popular sitcoms on TV right now:
The closest thing to an ordinary family in this list of shows is Family Guy, where the child is an evil scheming psychopath and the dog directed porn in Los Angeles for a while. Rob features the main character grinding against his grandmother in his underwear, Modern Family has a gay couple and moms and dads squabbling over what it means to be a mom or a dad, meeting others only over their cell phone.

How I Met Your Mother isn't really about the family at all, its about single people in New York City sleeping with each other and while the eventual marriage and settling down is suggested by the basic premise, the focus is on the cast's various interactions including a lothario who sleeps with as many women as possible and dates a stripper named Karma.

The problem is that it would be dumb for every sitcom to be like The Cosbys or Father Knows Best in a culture where almost 50% of marriages end in divorce and homosexuals can "marry" in some states. But having none of the shows be like that is unrealistic as well. And as I noted in my essay on Post Modern Heroism:

It isn't that I think every movie has to deliberately have some uplifting message and moral character, its that they deliberately avoid any such hint. Good storytelling contains these elements, rightly done, stories will uplift and teach without meaning to or trying to. I don't want some propaganda or tract when I watch something like Clash of the Titans and that's the very problem: that's what we get when you intentionally rewrite a story to leave out right and wrong, justice, heroism, and good versus evil.
...
In the end, our culture suffers from lacking any clear and repeated examples of good versus evil and right versus wrong in our entertainment. One of the best ways to raise kids to do good is to show them good and people doing good in a positive light. Lacking that, all they do learn is violence, selfishness, and the nobility of having nobody tell you what to do, which is anarchy, not democracy.

I get that people who work in entertainment probably find these shows very realistic and believable, for their lives. But most people don't live like that and what's more by deliberately avoiding traditional American cultural values, it undermines those values and sets society adrift without any anchors or shared ideals.

Its easy to overstate the influence and impact of television, you hear pundits doing it all the time on both the left (too much violence!) and right (too much sex!) but it is foolish to presume TV has no influence. This Iranian writer is a testament to how positive that influence can be - and isn't any longer.
Posted by Christopher R Taylor at 8:27 AM

Um, I think the show you are talking about is called Married...With Children.

ABC's "The Middle" offers a nice change of pace from the kinds of sit-coms you are talking about. The parents exhibit good work ethic, the family struggles with money but makes the best out of it, the dad is worn out from work a lot but not an aloof idiot, the parents exhibit a deep love for one another, and even when there is friction (both comedic and dramatic) between them and the kids, there is undercurrent of "but this is our family and that's what matters most".

One of the kids does have a male friend who is clearly going to be gay someday, and there is some good PG-rated comedy around both of their aloofness to this fact.

Anyway, it is one of the few modern sitcoms I am comfortable having the family sit down and watch together. My daughter was Sue Heck for halloween last year.

Corrected, thanks for the tip. I got the theme song right!

A little clip from The Middle, shows a lot of what I like about the show: