The intelligence community has a name for devices or parts which can be used both for a neutral purpose (building plumbing) or a nefarious purpose (creating a chemical weapons lab). They call it "dual use" and the term came to no small mockery during the Iraq war. Its a valid term, but I want to borrow it for something else.

There are news stories that are "dual use" as well. These are stories which, depending on what side of an issue or political fence you are on, can be good or bad. For instance, this recent story about President Obama by Byron Tau on Politico:

President Obama has given $5,000 to his own reelection campaign, an official confirms to POLITICO.

In an email to supporters this morning, Obama said that he had given to his own reelection campaign for the first time as a symbolic gesture.

"On its own, what I gave won't be enough to surmount the unprecedented fundraising we've seen on the other side, both from our opponent's campaign and from the outside groups and special interests supporting him," Obama wrote. "But we have always believed that there's nothing we can't do when we all pitch in. That includes me." 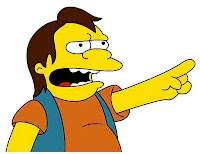 So the president donated $5000 to his own campaign for president. Some conservative yelled "Ha! pathetic! He has to donate to himself!" Then Nelson popped up and said "ha ha!"

But if that had been, say, Mitt Romney (who heavily has paid into his own election fund), they would say "great idea, he's using his own money!"

I really dislike this kind of partisan posturing. Its exactly why President Obama got a pass on homosexual "marriage" but Chick-Fil-A gets threatened with banning from cities for the same position. Its why President Bush was defended for his debts by some and Obama attacked by the same people for his debts.

This isn't taking a position based on reason or integrity, its just looking to see what side the person involved is on then deciding based on that. It is rank, pathetic team playing, and it just is not a very attractive or proper way to go about your life.

Personally I'm more unhappy that President Obama only donated $5000 to his reelection campaign. Maybe he's donated more, but as far as I'm concerned, if you want the job of president, you should be putting most of your own money and resources into that campaign, not letting everyone else pay for it. I mean, you want the job, right? You should be paying into it.

But $5000? His wife buys clothes that cost more than that.
Posted by Christopher R Taylor at 7:52 AM