"I've been done over so many times that no two parts of my body are the same age. When I die, God himself won't know me." 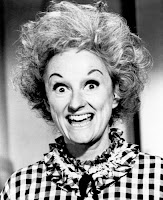 A while back I got into a discussion with folks about comedians and how rarely female comedians are very funny. It was related to Adam Carolla's comments on the topic, and on the whole I think he's right: women just don't have as good a sense of humor as men. There are exceptions, of course. Some men are utterly humorless and some women are just hysterical. On the whole I'm not much of a comedian, and I've known women who were great.

But generally speaking, women on average just aren't as funny as guys. I think part of that is because women are a lot more concerned about their public persona, what others think of them, and how they'll appear especially to other women so they can't relax enough to really be silly and have fun very often. Men tend not to pay enough attention to all that, so they tend to be less inhibited, more goofy, and more fun.

Also, getting up with a mmic stand in front of a crowd and trying to make them laugh takes... gonads. It is very intimidating, very nerve wracking, and if you don't do well you have to deal with massive failure. Guys socially are much more used to failing and by nature are more bold and adventurous on average. That means they're much more likely to try and to succeed in stand up comedy.

If you think down the list of great comedians - not actors, but people who tell jokes, make people laugh for a living - few women are on that list. You can name dozens of hilarious guys, from Bob Newhart to Nick DiPaolo, on and on. Many, many just hysterically funny men make that list. And almost no women do.

But in the discussion several names came up, a few women through the years, and one that every single person agreed on - that knew her - was Phyllis Diller. She was just gut bustingly hilarious. Diller was able to stand toe to toe with the giants of comedy and kill. She was every bit as funny and often more so than Bob Hope, Johnny Carson, Milton Berle, Henny Youngman, Don Rickles, and all the big names of her time. And Diller's work was solid, original, and usually quite clean. Sure, she could get nasty too, but she tended to avoid it.

For 47 years, Diller made fun of herself, dressed goofy (she started to originally because she had a nice figure and wanted to disguise that or her jokes wouldn't work), laughed that awful cackle, and made everyone laugh out loud. She was a clown, looking silly so we could forget our troubles and smile and giggle along with her.

Sadly, time and age catches up with all of us, and the talented and hilarious Phyllis Diller died, age 95. She lived a long time, made a lot of people happy, and had a great career, family, and life. God be with her and her family.

Here is a bit from Phyllis Diller's Goodnight We Love You show, her final appearance:
Posted by Christopher R Taylor at 8:22 AM

God bless her, she was funny. I wish comedians today were funny.