"But enough about me. Tell me something you like about me."
Neil Armstrong has died, which is just sad to me and the whole world. As Richard Hammond from Top Gear tweeted, he was a proper, proper hero. Armstrong seemed like a very good man, a humble man who accomplished astounding things in his life. President Obama has this on his official Tumblr page:

Neil's spirit of discovery lives on in all the men and women who have devoted their lives to discovering the unknown - including those who are ensuring that we reach higher and go further into space. That legacy will endure - sparked by the man who taught us the enormous power of one small step.

Yeah that must be why he gutted the manned space program, because he's so inspired by Neil Armstrong's example. Still, the statement is good. The problem is, here's the accompanying image, courtesy The Daily Caller: 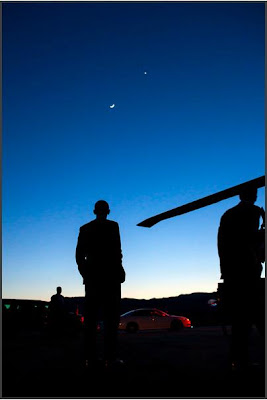 Somehow it always ends up being about Obama, doesn't it?
Posted by Christopher R Taylor at 10:12 AM

To be fair, Bush is the one who phased out our manned shuttle program without having something else in place. Obama just didn't reverse that decision. Also to be fair, the recent Mars Rover mission was a Bush era program as well, so the only credit Obama gets is that he let it continue.

I'm not happy with the idea to use NASA for Muslim outreach, but otherwise I don't have a lot of complaints about our current space program. The antiquated space shuttles needed to go before we embarassed ourselves by losing any more of them. They never worked as intended anyway.

Until we decide to do a manned mission to Mars, I kind of like the idea of shifting things to a more private approach, and commend Obama on continuing to go down that path rather than commit major resources to a program that has no identifiable overreaching goal.

Obama specifically signed an executive order to end funding for manned missions until 2024 or something like that. He shifted the money to satellites to look for global climate change.

So we are cutting all funding for the Space Station?

The ISS is paid through 2015, and no new budget has been set up for it. I think I read somewhere that the US is letting someone else take over their part of it but I can't find it.

No what I mean is that manned missions were planned to go to Mars and elsewhere and they were abandoned by the Obama administration. Much of the funding set aside for developing that was moved to global warming measurements.