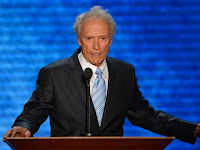 Clint Eastwood spoke at the Republican National Convention last night, and it was the only speech I actually watched. I wasn't so much interested in the politics as I was curious what he'd say - and I think a lot of other people were, too. And the response has been curious to me.

"Baffling," "Awkward," "Rambling," and so on are all used by various pundits - not coincidentally those leaning to the left - to describe the speech. And it was confusing at first because everyone expected him to bring his Dirty Harry/Gunny Highway persona to the stage. Instead it was the real Clint Eastwood, the actual man rather than the actor and he was a modest, ordinary sort of man instead of some tough guy icon caricature.

His use of the empty chair made many think of comedian Bob Newhart's brilliant phone call sketches, and I got the strong sense that Eastwood was thinking of this as well. And it worked brilliantly. I don't say that because I like the content of what he said, but because of who his targeted audience was. Clint Eastwood wasn't trying to reach the under 50 crowd and he certainly didn't care about the college age ironist and the hipster 30 something. He was after the over 65 crowd.

Clint Eastwood's speech was about two things: stripping down the image of Obama as a nice guy trying his best and letting older voters know its okay to vote for the other guy. The post-Korea generation was hammered during Truman and Ike's force integration that "we owe it to these men to let them grow." And that was right, but for decades now older people have been shamed into fearing the appearance of racism. Words and statements they grew up with being comfortable with make younger people stare at them in shock.

They fear being perceived as racist. They think Obama may be doing a lousy job but he seems like such a good fellow and he says he's trying hard. The older you get, the more forgiving you tend to get, remembering your past mistakes. You tend to be less absolute in your judgments and especially in trusting your instinct. The times you were wrong, sometimes disastrously wrong, loom larger in memory than when you were right. And young people are continually telling you that you're mistaken, foolish and old. So you don't want to be that guy again.

Clint Eastwood gently and with no small humor reached out to those people with brilliant targeting and let them know not only is this Obama guy not necessarily the nice fellow everyone says, but that he's had his shot and he blew it. We tried out this slick talking neophyte, the guy with no experience but great patter. He's lousy at the job. Its okay to let him go, you aren't a bigot for doing so, its just common sense. Time for someone new, maybe a businessman, perhaps?

As Richard Fernandez puts it at the Belmont Club:

...it wasn’t one of those “I take this platform tonight with pen in hand, bearing in mind the immortal words of Clancy M. Duckworth” type orations. It wasn’t the speech of someone who was running for office.

Rather it might have come from Mr. Weller down at the corner office musing on simple things to not very important people. How it wasn’t good form to mess things up continuously. How one might lose faith in a man who made one broken promise too many. How at the end of the day everyone either did the job or quit out of decency. Even Presidents.

There was no malice in it. Just a tone of regret. But it was redolent of memory too. Of simple things a world away from the Mountaintop; of sentiments a light-year from dramatic arcs, and of ordinary happiness in a universe apart from grand bargains and high-flown rhetorical visions. They were truths that everyone who has ever worked knows but has somehow forgotten because it was so ordinary.

If you're a 30 year old Manhattan socialite or a 19 year old college student he probably seemed like a strange, doddering old man. If you're older, you remember Bob Newhart, you get his references and delivery, and you understood his message just fine. He was basic, heartland America, like a comforting grandfather who said it's time for someone else in a way that got attention and a smile. That worked great.

The fact that urban socialite leftists didn't get it or thought it was awful is just one more indication it worked.

*UPDATE: And the urban leftist hipster demonstrates how totally they didn't get it, by "Eastwooding" by treating the empty chair as someone to yell at. The New York Daily News article declares the speech "bizarre" in the headline and quotes an urban hipster:

“Clint, what happened? You was always the man,” he said.

When he was done, though, the 60-year-old Manhattan man felt more dejected than fired up.

"That didn't feel good. It was depressing," Counts said.

"I have always looked up to Eastwood and it's sad. If you're for Romney that's fine, but don't go all zombie on me ... It's a strange thing. That's not the Dirty Harry that I know."

Can you pronounce Shibboleth?

**Another thought: I wrote recently about the way mockery has displaced wit in our culture. Clint Eastwood showed how to engage in satire without mockery, to use humor to teach and educate. And tin-eared left leaning urban young people just didn't get it.
Posted by Christopher R Taylor at 9:18 AM