"Is that so bad? Or is there, maybe, a different way to analyze the scene that had just unfolded?" 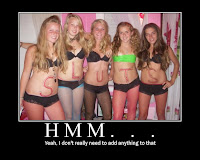 I haven't been in college since 1985, and back then Docksiders, Miami Vice, and the Thompson Twins were all popular. MTV had VJs and showed videos back then. Cable TV was around but it was mostly USA network and WGN reruns, with the movie channels. Reagan was still president. And back then, girls said "no" and waited for you to make the first move.

According to Hanna Rosin at the Atlantic (language in the article not safe for work) that's all changed. Obama is president. 50 cent and hoodies are popular, and Big Bang Theory are big. And girls, well...

I found barely anyone who even noticed the vulgarity anymore, until I came across a new student. She had arrived two weeks earlier, from Argentina. She and I stood by the bar at one point and watched a woman put her hand on a guy’s inner thigh, shortly before they disappeared together. In another corner of the room, a beautiful Asian woman in her second year at school was entertaining the six guys around her with her best imitation of an Asian prostitute—­“Oooo, you so big. Me love you long time”—winning the Tucker Max showdown before any of the guys had even tried to make a move on her. (She eventually chose the shortest guy in the group to go home with, because, she later told me, he seemed like he’d be the best in bed.)

She describes the women in the bar scene as being complete sluts, rejecting any sense of commitment because it would interfere with her career and be annoying. Women who deliberately pick juvenile men because they'll be wild and exciting and never, ever want to settle down. Aggressive women who are looking for a "hook up" or one night stand, just someone to have sex with and forget about.

"It’s like, ‘Hello.’ ‘Hello.’ ‘You wanna hook up?’ ‘Sure.’ They are so aggressive! Do they have hearts of steel or something? In my country, a girl like this would be desperate. Or a prostitute,” one Argentinian man describes the situation. Yet, Hanna Rosin seeks to find a positive in this, or perhaps to justify it.

But this analysis downplays the unbelievable gains women have lately made, and, more important, it forgets how much those gains depend on sexual liberation. Single young women in their sexual prime—that is, their 20s and early 30s, the same age as the women at the business-­school party—are for the first time in history more success­ful, on average, than the single young men around them. They are more likely to have a college degree and, in aggregate, they make more money. What makes this remarkable development possible is not just the pill or legal abortion but the whole new landscape of sexual freedom—the ability to delay marriage and have temporary relationships that don’t derail education or career.

To put it crudely, feminist progress right now largely depends on the existence of the hookup culture.

So I don't buy the stories I read in this article, a company that had this kind of thing going on would be rapidly sued out of existence. But probably some of that takes place, and while Hanna Rosin wants to blame men exclusively, women have to take some of the blame. If you shrug at crudity or even reward sexual advances with a "hook up" then you're going to get more of that behavior. People do what they are rewarded for.

And in a culture where men are given no reason to grow up, encouraged to stay perpetual teenagers, and women reward them for it, should anyone be surprised this is what we're reduced to? I recall reading about stone age primitive cultures that are essentially defined by sex, at all ages, between all members of the tribe. There was an Indian tribe that Lewis and Clark spent their first winter with on the way to the Pacific Ocean, the Mandans, believed that if a woman had sex with a man, his power passed on to her, and she could pass that on to her husband. The result was rampant sexually transmitted disease.

I don't have to write here about how women were traditionally the guardians of virtue and morality, that they were the civilizing influence on men, forcing them to mature and grow up, do I? That women protected themselves and expected men to protect them, right? That's largely gone in some areas, and women are suffering for it.

Like most feminists, ms Rosin thinks girl power = sexuality, as if women have no other ability or distinct power in their lives. And even were that true, sexuality only has power if you control it. If you give away the free milk, nobody is going to buy the cow, as it were. And the lack of understanding that women have significantly more ability to shape their culture and those around them in ways other than sex is pathetic in someone who allegedly celebrates womanhood.

Ms Rosin wants to paint this slut behavior as some sort of victory but I just don't see it. I see it as a terrible loss not just for those young ladies but for the civilization as a whole. Yet it seems to be largely restricted to big cities and certain colleges. The rest of the nation seems to reject this, and things are quite different in some areas where the concept of modesty, a father protecting his daughter, and men as guardians of women are experiencing a serious resurgence.

And between those two cultural movements, I can guess which is more robust, which has a future, and which will be productive, useful, and valuable to the surrounding world.
Posted by Christopher R Taylor at 8:30 AM