HISTORY WILL TEACH US NOTHING

"our models show that there was also a cold snap at that time, which lasted a few days and drastically lowered the temperature." 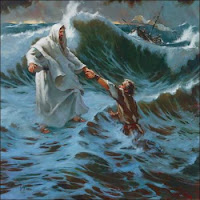 One of the stories in the Bible that people like to dismiss is the one about Jesus walking on the water. Its one of those supernatural tales that folks cut out of the Bible like Thomas Jefferson, preferring to keep only the parts they like and want to believe.

A scientist in Florida State University in Tallahassee has another approach: he wants to explain it away. Amitabh Avasthi at the National Geographic writes:

"A rare set of weather events may have combined to create a slab of ice about 4 to 6 inches [10 to 15 centimeters] thick on the lake, [making it] able to support a person's weight," said Doron Nof, an oceanographer at Florida State University in Tallahassee, Florida.

His findings appear in this month's issue of the Journal of Paleolimnology.

Nof bases his theory on a unique freezing mechanism he calls "springs ice."

This forms when warm, salty springs flow into a freshwater lake, preventing the lake from freezing entirely in cold weather.

Springs linked to this kind of freezing are found in Tabgha, Israel, a region where many archaeological features associated with Jesus have been found.

Nof goes on to explain the various conditions that might have created a patch of ice and Jesus just walked out to the boat on that. This is one of those explanations that requires people in the past to be basically stupid and gullible. There are a lot of terms for it, such as "stupid Semite" but basically it all boils down to this: stupid, unscientific people in the past were so unsophisticated that they didn't know what ice was and attributed walking on it to supernatural powers.

Now, people in the past weren't any smarter than we are now, but they weren't any dumber either. Something a lot of people don't seem to realize is that it snows sometimes in Israel, and those people knew what ice was. Its not like they lived in the Sahara and were totally unfamiliar with ice. They'd have recognized it. Nobody would attribute someone walking on ice to godlike power. Nobody would have been shocked or confused by it. These were fishermen and they were quite familiar with how water looks and behaves.

This kind of attempt at explaining things is creative enough, but it requires people from the past to have been morons, gullible twits confused by everyday phenomena, the kind of people who attribute magic to fire. The truth is, folks in the first century Palestine were no stupider than you or I. They were less scientifically capable but were far more familiar with the natural world and how it works than almost all of us.

I just shake my head when scientists try this kind of thing out. No, Moses didn't cross the Red Sea during low tide on a particularly dry year, they would have known what that was like. No, the burning bush wasn't a natural gas vent that mysteriously erupted then went out and never was repeated.

Look, you don't have to believe the supernatural stuff in the Bible - that takes faith. Just don't make goofy flailing attempts at defining way the supernatural stuff that requires people in the past to be idiots. Its a comforting myth to think that your generation is the wisest, smartest, most educated, most evolved people that have ever lived but you're just as goofy and silly as everyone before you. We just have different things to be goofy about, is all.

*Hat tip to American Digest for the Nat Geo story.
Posted by Christopher R Taylor at 11:44 AM