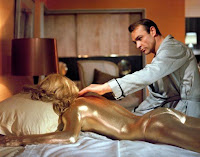 Ask a James Bond movie fan what the best Bond movie is, and almost without exception, they will say 3: Goldfinger. Although From Russia With Love was a superior spy film (and very close to the book), Goldfinger is the ultimate James Bond movie. All the concepts and images we hold dear are established perfectly in this film like no other. It is a movie that is so popular that it is estimated that 75% of the planet has seen the movie at least once.

There are plot absurdities (radioactive gold is just as valuable as non radioactive gold, for example) and some of the more silly dated scenes like how cavalierly Bond dismisses his female assistant "man talk" with a slap on the rear end, but overall it works extraordinarily well and holds up as a classic. Its dated, but not in a bad way; its like a classic car. You know that '57 Chevy is from 1957 and that's part of what makes it so great.

The website Neatorama has an interesting write up on the movie Goldfinger by "Miss Celliana" and while it includes spoilers, its unlikely to spoil anyone's enjoyment to examine details of the film. For example: the film was banned in Israel.

Why? Well the actor who played Auric Goldfinger, the fascinating Gert Frobe, was German, and had actually been a Nazi. However, it was revealed that he was only nominally a member, and spent time smuggling Jews out of Germany, hiding them in the family home with his mother and father.

Other trivia bits:
Goldfinger is truly a classic for other reasons than the obvious Bondian trappings. The set design was brilliant, the story intriguing, the music won awards, and the plot is a primer in good adventure writing.

Bond is first established as a serious talent. Something I cannot stand about so much modern writing is that the hero is never really given a chance to be tough and capable. They never establish why these heroes are so very great, always throwing them into difficult situations immediately. If you don't give your hero a chance to shine first, then the later threats don't look as dire as they should. Its just another tough situation like the last 5 he faced.

The hero then faces challenges he has to make his way out of, things that are difficult. For about half of Goldfinger James Bond is a prisoner and is unable to escape. His reaction is part of what established the Bond legend: he doesn't fret, he sits down and gets comfortable until he gets a chance, being charming all the while. Auric Goldfinger utterly controls and dominates Bond, and you have a real sense that he would have killed Bond with the laser. It wasn't just an empty threat, Bond meant nothing to him.

When James Bond finally triumphs, it is only with great difficulty over a genuinely dangerous foe who is a serious threat. Goldfinger's plot isn't to take over the world or some ridiculous scheme, its to get very, very rich. He doesn't care about revenge, he doesn't care about fame or power. He has figured out what he thinks is a way to control the gold market. And he's brilliant and ruthless at it.

Overall, this is one of the most successful adventure films ever made, and it stands out even in a series with many standout films. Studying why teaches a lot about story writing and film making; it really ought to be required viewing at film school.
Posted by Christopher R Taylor at 8:42 AM

Well, it sure ain't Octopussy.

Thanks for that info about Gert Frobe and his family. I had no idea (as most of the world doesn't probably).