GET MEDIEVAL ON THEM

"It's about adversarial perception, timing, distance, leverage, and technique, all used in good martial spirit."

If you have heard any geek or teenage boy discussion of blades, you probably have heard (or participated) in a debate over which would be the more dangerous warrior: The romantic European knight or the stylish Japanese Samurai? Europeans usually are declared the loser because they're supposedly slower and more clumsy and their swords aren't as good, etc.

Except research is starting to show that almost all our understanding of medieval European knights is in error. We know their behavior wasn't as courteous and chivalrous as the more romanticized tales of King Arthur would have you believe, but what's changing is the understanding of basic elements of medieval warfare.

For example, when an athletic man dons an appropriately sized suit of proper armor, they're quite mobile. Yes, it took a crane to put a man in jousting armor on his horse and the decorative suits you can find are very heavy and thick, but those weren't combat outfits. Jousting was recreative sport, and the armor worn for that didn't have to be mobile or light, all it was for is show and to protect the rider from a direct, crushing hit from the front.

Two horses charging at each other at a combined speed of 30-40 miles an hour, concentrated onto the blunted point of a lance generates a tremendous amount of impact. The point was to see who was the better lancer, not to injure or kill your opponent. You wanted to dismount, not impale. So the armor was incredibly heavy (particularly from the front). Comparing jousting to regular combat is like comparing, say, a football player to a martial artist. Its a completely, but superficially similar different activity.

Knights were able to vault onto the back of their horses. They could jump over a fence, do just about anything a normal person could. I watched men do just that in period accurate armor on a television program showing research into medieval armor. These guys weren't clanking tanks, they were as agile as today's soldiers in body armor. If a knight fell down, he could get back up, he didn't need a squire.

And the weapons were much better than is generally understood as well. The katana is a very fine sword made of multiple layers of different kinds of metal to generate strength and flexibility, with a harder section at the blade to retain sharpness and a softer at the spine to allow the blade to bend. This results in a very sharp, very strong sword that does not break easily. The process is very difficult and time consuming, involving folding and pounding the weapon, using a cooling and heating process that greatly strengthens the metal and blends in various elements.

And researchers have discovered that's exactly what European blacksmiths did as well. The art was lost over the centuries as broadswords became obsolete and became the rapier and foil, which have an entirely different construction. But old swords, manuscripts, and information from the medieval period have revealed folded blades with the same concept: a softer central core and harder, sharper portions for the cutting edges. The reason we know so much about the Katana is that they were still being made and used as late as the 1800s, and even were used by Japanese officers in World War 2. Their technology and skills weren't lost in time, replaced by the gun.
In other words, the medieval broadsword was a sharp, strong, and flexible as the katana. The biggest differences are the shape and use, not the tool. And it makes sense, both cultures developed their weapons for the same reason: they wanted a good weapon to kill their enemies with. In time, they found better and better techniques, discovered that heating and cooling seemed to generate a superior metal, found that folding created patterns and allowed the weapon to be designed a specific way, and so on. As the centuries rolled by, the skills increased.

So its not as if Japan had a unique patent on the Katana's technology; European knights had it, too. It is generally accepted that a curved blade is superior to a straight one, for slashing attacks, but a straight one is superior to a curved one for piercing (thrusting) attacks. A curved blade pulls away better so you tend not to get your weapon stuck in one enemy while another approaches. But it doesn't punch through armor as well, because you cannot direct as much force to the point, its deflected slightly by the curve.

And here's where the main difference comes in. Japanese Samurai were primarily interested in the mounted attack, passing by an opponent, infantry and archers on the ground. Peasants, for example. They needed a weapon that would work well for a cavalry charge, and trained to make a single, lethal attack from drawing their weapon. The single edge worked well for this kind of assault, and the curved shape assisted in a smooth, effective draw of the sword.

Knights had a different sort of task. They did fight from horseback, but often used other weapons for that task, such as a mace or axe, and the lance (not that big heavy jousting one, a light one with a real bladed point). And the fighting style of the knight was quite different from the samurai. 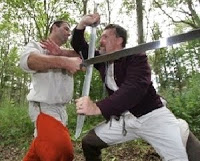 Medieval scholars have found old texts that are illustrated almost like a martial arts book today, or a comic book. It has figures with stances and proper weapon technique, done with the art style of the day. While the images are stylized (flat perspective, for instance), they do show the basic patterns of medieval combat. From these writings and other documents of the time period, scholars have discovered a great deal that was unknown for centuries.

For example, watch a movie swordfight some time, not the fencing type from films like Princess Bride but, say, Excalibur. They're doing it all wrong, almost everything is wrong. They're fighting for style and to look good on camera, but its based on the swordfights you used to have as a kid if you were like me. You're swinging at the other guy's sword most of the time.

Now, that's fun and you're less likely to get hurt but you also aren't going to win that way. Its like playing tennis and hitting the ball directly at your opponent. The point of tennis isn't to volley forever, its to put the ball where your opponent cannot reach it. And the point of sword fighting isn't to spar, its to kill. Medieval combat scholar John Clement writes at io9:

The sources tell us in particular to be aggressive, audacious, and take the initiative. You don't try to just win the range and timing by sneaking out blows and feints. You seek to displace the adversary's blows with counter-strikes timed in the middle of their action. You don't just hit out wildly, or bash on their weapon. The sources tell us specifically to intercept and stifle their attacks, by binding on their weapon and using body leverage. And you don't try to receive blows of their edge on your own edge in a static fashion — but set them aside with your flat, or better still, counter-hit them with your edge against their flat. And lastly, both thrusting and cutting as well as grappling were always recognized as integral components for wielding all swords and weapons — armored or unarmored, on foot or horseback.

Instructional books from the time period depict knights holding their broadsword - and especially two handers like the claymore - like a staff, blocking attacks and using the pommel to strike with. The combat was fluid, mobile, and fast. Knights weren't ponderous clods banging way on each other with swords until they got too tired to lift their arms, they were warriors showing dazzling skill. When your life is on the line, you learn to do it well or you die.

In other words, the medieval knight learned martial arts, just not the eastern kind. And since that became obsolete due to gunpowder, people stopped teaching it and it faded away. The west tends to do that: we abandon what doesn't work anymore and don't whine about lost culture, we pick up what's better. That's why the Japanese were still fighting with swords in the 1800s and the west had rifles and steam ships. Eastern culture tends to be one of deep reverence for tradition and strong opposition to change and the new.

So in the end, the Samurai and the Knight would probably match up very well toe to toe. The final result would be skill and luck, not one overwhelming the other due to some particular aspect like weapon quality or martial arts training.
Posted by Christopher R Taylor at 8:19 AM