"It takes two to quarrel, but only one to end it."
Top ten ways to make the presidential debates more interesting and useful

10 - Require all answers to be in a language other than English
9 - Have Statler and Waldorf comment on the debate
8 - Have a playboy model act as a moderator
7 - Have grade school kids ask all the questions
6- Have guys like Jon Stewart, Alonzo Rafael, and Steven Crowder moderate
5 - Have Alex Trebek moderate and require all responses to be in the form of a question
4 - Make the moderators admit their personal bias first and have a real mix
3 - Add in all the cranks and oddball third party candidates and give them equal time
2 - Give both candidates bats and have them fight it out
1 - Use a live bear for a moderator

Honestly, my ideal answer for the debates his this one: Make the debates like the Lincoln-Douglas debates, without a moderator. Instead of having someone ask questions of the candidates, the candidates present their ideas, respond to the other person, and have a discussion in the formalized method of a real debate. 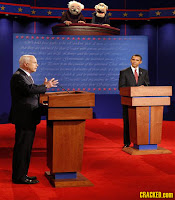 That way there's no "gotcha" question from the moderators, no topic gets ignored unless both candidates just skip it, and each one is forced to deal with what their opponent argues. I don't like debates, I think they're boring. I tend to read a few different viewpoints of analysis afterward instead of the actual debates because its just tedious to see them going at it.

And I will never, for the life of me, understand why it is that the GOP puts up with having specifically hostile to them be moderators, they did it dozens of times with the Republican debates. What is wrong with them, do they LIKE to have someone attempting to make them look bad and help the Democrats do the moderating?

Its not that every single one of the proposed moderators is a complete partisan hack but some of them are, and that number should always be ZERO, or at the very least be an even mix of partisans. Put Michelle Malkin out there to balance out Candy Crowley, or something. Have more than one moderator, one to the left and one to the right, if the networks INSIST on having a hack of their own. But don't just accept the battle as your enemy defines it.
Posted by Christopher R Taylor at 9:23 AM

They aren't called bats. They are called 'debate sticks'. I think the use of those would be a fine thing.