"For NASA, space is still a high priority."
-Dan Quayle
NASA managed to land a rover on the planet Mars through a series of very complicated devices and brilliant engineering. The little thing is driving around and taking pictures and samples now, hopefully not running into Marvin. 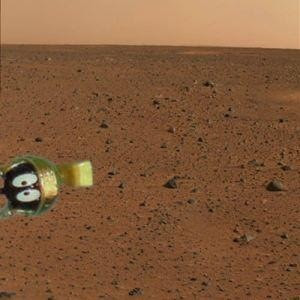 It was great news to hear and lots of people watched the landing online at NASA's website. I didn't stay up but the discussion of people who did was interesting; NASA didn't give the mission terrific odds of success, but it came off well.

Immediately afterward, a press conference was held in which among other things, the NASA officials praised President Obama's space initiatives. The problem with this reaction is that President Obama slashed the NASA space budget and reassigned it into such space exploration pursuits as making Muslims feel better about their scientific heritage and looking for evidence of global warming on earth. People giggled at Dan Quayle's quote but today it looks almost prescient.

Another problem is that the Obama administration wasn't even in power when the Curiosity program was started up and worked on. The program was begun in 2004 when the proposal was approved by the Bush administration, and the programing and hardware was almost complete by the election in November 2008.

In other words, the only credit the Obama administration can take for this success is that they didn't kill the program. Its like taking credit for your son playing the banjo because you didn't stop him from doing so. As Andrew Malcolm writes at Investor's Business Daily:

Alas, budget cuts have retired the entire U.S. space shuttle fleet scores of missions short of their designed flight lifespans. Highly-trained American astronauts are steadily retiring. While those remaining must rent seats aboard Russian rockets to reach the International Space Station for years to come. While China plans manned Moon landings before 2020, an American return is unlikely in the foreseeable future.

So successful have Obama's budget cuts been that NASA has had to pull out of a pair of joint missions with European countries to retrieve Mars rocks for study on Earth. Russia took over the U.S. leadership role.

Of course, after bloating the US budget to sixteen trillion dollars and growing, the last two presidents have all but killed NASA and any hope of real space exploration. But you do have to wonder the same thing as commenter Jerry does at Ace of Spades HQ:

Especially since everyone agrees the rail will cost many times more than that and is basically of no value to Californians other than bragging rights. When Amtrak loses millions of dollars a year on food costs alone despite charging almost ten bucks for a cheeseburger, you know trains are not a great investment.

*UPDATE: Here's how the Mars program was treated in 2004 when first approved by the Bush administration: Physicists Decry Bush's Mars Mission Plan. Oh but NPR wasn't alone. Bush's Mars Plan Attacked; It's just pie in the sky to the foreign press ran at Slate, and Mr. Bush's Giant Step Back in Space ran at the New York Times.
Posted by Christopher R Taylor at 8:27 AM