COMMON KNOWLEGE: War of the Worlds

"We now take you to Grovers Mills." 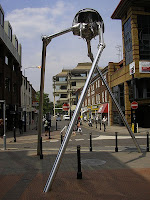 HG Well's book War of the Worlds is a classic science fiction tale speculating on how it would look if an alien culture tried to conquer earth. The basic themes of this book have become almost inescapable patterns in alien invasion fiction, with ray guns, tentacled monsters, rebuffed attempts at communication, and even the ending of the aliens being killed by a virus (something the 1996 film Independence Day used with a different twist).

When CBS Radio's Mercury Theater needed a new story in 1938 to adapt for broadcast, Orson Welles picked War of the Worlds. Mercury Theater was well established by this point, having rune over a dozen previous weekly broadcasts starting in July of that year. The Mercury theater went on to do several dozen stories and was picked up by Campbell's Soup Company, changing its name to the Campbell Playhouse. They did stories ranging from A Tale of Two Cities to Our Town, and their many broadcasts can be listened to online - I recommend doing so.

When War of the Worlds broadcast on October 30, 1938, Orson Welles was not a well known actor. His incredible voice was instantly recognizable, but he was not the famed actor and director he would eventually become. A stage actor in Europe and America, Welles was the executive producer of the Mercury Theater, and their first performance of Julius Caesar set in modern fascist Italy won them rave reviews.

When War of the Worlds was broadcast the day before Halloween, Welles' life changed. According to news reports and later dramatizations such as 1975's The Night That Panicked America, people all across the listening public believed the report was true. It was crafted in such a way as to sound valid, with 'ordinary' radio broadcast interrupted by news reports telling the story of the Martian invasion. With typical skill and talent, the Mercury team crafted a compelling and plausible story. It was perhaps the first fake documentary style broadcast, lending credibility to the tale as if it was happening as listeners tuned in.

We're told that the broadcast was so believable that mass hysteria and panic swept across Northeastern America, and Adolph Hitler mocked the credulous and frightened Americans in a 1938 speech as evidence of corruption and decadence in the USA. This radio broadcast is even credited with the origin of the Civil Defense network that was relied on during WW2.

We're told that thousands panicked, jamming phone lines, setting up defense barriers, emptying out churches, arming themselves, and even contemplating suicide. The entire nation was wracked with terror.

But is that what really happened? Not really.
To begin with, the radio show made it pretty clear this was just a show. They said so at the beginning and at the intermission: now we return to the adaptation of HG Well's War of the Worlds. Some act like it was a deliberate prank these days, but it wasn't. The Mercury team was just putting on yet another adaptation as they'd done with Treasure Island, The Count of Monte Cristo, and Around the World in 80 Days earlier.

Another problem was that the show pretty obviously was compressing several weeks worth of events into a single broadcast. The aliens arrived, hatched out, built their machines, moved across the country, and destroyed several cities in a matter of about an hour on the show. In the book it takes months for them to finally die.

The truth is, other than a very few scattered incidents, most people knew it was a radio show. According to surveys taken after the show ran, few thought it was anything but a radio broadcast. After all, the Mercury Theater had been running adaptations of books for months, and they made it clear what was going on periodically through the show.

And while CBS had a fairly wide broadcast area, its shows repeated by other radio stations around the nation, they didn't blanket the whole country with their radio program. But the news sure acted like they had terrified the whole country. W.Joseph Campbell writes:

It made for a good story. A few reports of people taking it seriously were found and out of this came the myth: America panicked by radio show, what a bunch of rubes. As Campbell points out, the day the broadcast took place was Sunday and at that time, Newspapers had at best a light staff on that day. They took in a few reports and ran with a story despite having insufficient resources to actually dig into the facts. Using a few anecdotes that the wire services offered, newspapers wrote virtually identical stories on the broadcast.

It is true that calls to police and fire increased, but that was due to people who heard a small portion of the program and called to find out if there was anything to this report. But that doesn't denote panic, it denotes curiosity and rational desire for more information. And the large volume of telephone calls that switchboard operators commented on wasn't just to emergency services, but to friends and family. That's how you tipped people off to something interesting you'd found. You gotta hear this radio show, its brilliant!

It is true that in the early days of radio and in the early 20th century, the American public was much more likely to believe what they heard on this new device than we are today. Less cynical and skeptical of life, they would have been more likely to trust the information they got. We're so different today, now we scoff at radio and trust what the internet tells us instead.

The truth is, there's no evidence of widespread panic, or even much panic at any scale. A few anecdotes were strung together by a wire service, and understaffed newspapers ran a story on it, a curiosity. And so the myth grew.

What is almost certain is that this broadcast established radio as a premier format to deliver dramatic and entertaining content. Orson Welles almost invented the radio show that was so popular for decades (and he personally was involved in quite a bit, even doing the voice for The Shadow). Welles himself became a celebrity after the show, and that broadcast was so popular it beat out the Edgar Bergen/Charlie McCarthy program it was in competition with on NBC radio.

Incidentally, Orson met HG Wells in San Antonio Texas, and radio station KTSA recorded the conversation. It is the only known meeting between the two.

Go ahead and listen to the show. It holds up incredibly well and you can tell how easy it would be to recognize this as a theatrical adaptation just by listening. Plus, its very entertaining.

*This is part of the Common Knowledge series: things we know that ain't so.
Posted by Christopher R Taylor at 9:02 AM