"Fat, drunk, and stupid is no way to go through life, son."
Chances are, at least some readers have sent or are about to send a kid off to college in the next few weeks. If so, you're very aware of the expense involved, and how that cost probably went up this year, again. Here's a chart showing how the expense of higher education has risen over the years: 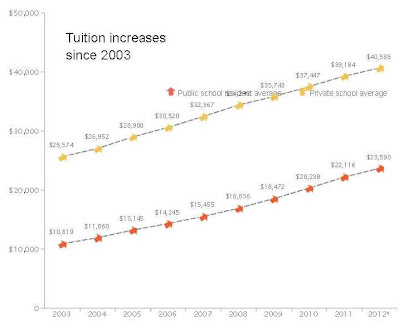 It comes from a story at the TaxProf Blog about a National Law Journal piece, reporting about an increase in New Jersey law schools. They're raising tuition by 4%, at a time when applicants for law schools has dropped by 14%. In other words, they have fewer students interested but are raising the prices.

Now, schools don't raise their tuition just because they want to build a playhouse with bricks of hundreds, they do so because they have higher expenses. And while the last few years the cost has increased by 5%, this actually represents a slow in the increase. But where is this increase going? University Deans claim there's no increase in salaries, that they're taking unpaid furloughs, and are cutting back.

There are a couple reasons for that and one major reason is represented by the University of Oregon. For years now, the U of O has wanted to renovate and expand the student union building. Its too small and simple for a college their size, the administrators argue:

A referendum scheduled for Oct. 18 will allow students to vote on whether to pay $117 per term in new fees to support the project, which would add three stories to the student union, create new offices for student government and organizations, and add a 1,080-seat concert hall.

Yet when this plan is presented to students, they keep shooting it down and the U of O rules require student approval. The administrators presented the idea to students twice last year, and both times it was vote down. So they have spent over $50,000 on a firm to sell the idea to the students, including swag.
The cost to the students if this plan goes through? Almost 4% increase in tuition. But the students don't care if they have a snazzy new student union building, and don't care to pay more for school. The University of Oregon loves the idea because its bragging rights and makes them look good compared to other Pac-12 universities. Students gain nothing from a new building except higher tuition.

Its projects of this sort, to increase status and beauty of the school with no benefit to education, that are costing more and more. When you combine it with the insanely inflated administration staff that higher education has piled on, its difficult to have a lot of sympathy for them.

The other major increase is largely due to unions. No, its not because unions are directly increasing expense for colleges and universities. Despite being leftist hotbeds, most of these institutions have little union presence. The cost is more indirect.

As states went crazy spending during the Reagan, Clinton and lesser Bush economic booms, they piled up costs that during tough economic times are impossible to continue. In fact, they were unlikely to continue even during good economic times. Most of these expenses are due to big spending programs such as Oregon's socialized medicine scheme, but a major portion of the cost can be traced directly to public employee unions.

The gold plated pension plans, benefits, and pay that public employee unions were able to force and lobby out of state governments is piling up rapidly and breaking the back of nearly every state in the US. Faced with immense debt and little hope of reversing it, states are trying to cut back expenses. But when they look at the unions, well unions carry tremendous political power, so they are difficult to cut. Just look at Governor Daniels' efforts which failed miserably in Indiana because he tried to cut benefits and pay from public employee unions.

And as each special interest is targeted, it has lobbyist groups and media backing reasons why they should never, ever be touched - nay, should have an increase in spending.

Except one area: higher education. Few colleges or universities pay or make any effort to lobby. Few make an effort to reach out to the media to help control the narrative. They don't tend to have strong connections to politicians and policy makers. So when the axe comes down, state institutions tend to get cut first.

Essentially, institutions of higher education are being betrayed by the leftist allies they educated and back most strongly. Because when it comes down to money, all those high ideals and lofty statements vanish and its "me first" and "every man for himself."

That means they are getting fewer state government funds, and have to cut back or raise fees. And that translates into cutbacks for the staff and raised tuition. Even institutions that rely on private funding are facing cuts because people just have less money to donate, investments are doing more poorly, and costs are going up. The Obama administration does its best to pretend inflation is no particular concern but everyone is feeling it.

So the costs pile up, the income is dropping, and students are the ones paying the price. Yet these students are deciding to put off or skip paying that price more and more because they can't afford it. Colleges have to make some choices: keep the sea of administrators, counselors, diversity advisers, and palatial campuses... or survive.

For how I think they could survive and more on the costs of higher education, my ideas on Rethinking the University
Posted by Christopher R Taylor at 8:01 AM