"If all the Chinese people were to jump, the whole world would feel it" 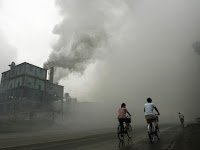 If you read many pundits on the left these days, we all need to be more like China. They seem to love the place, possibly because its the only real Communist dictatorship of any size left on earth. From Elizabeth Warren to Joe Biden to Thomas Friedman, we keep reading and hearing about how great China is and how America sucks compared to it.

Then from the right we keep getting a different message: China is a danger, its going to overtake the US in the world economy, its a growing superpower, we need to be ready. China has a surplus of males, it may decide war is great and to invade the US!

Something people who are younger these days don't seem to realize is that every big totalitarian state makes a huge effort to seem wonderful. They all build huge projects, beautiful buildings, make impressive statements. They strive to do best in the Olympics, they publish amazing reports of their country. Its not enough for a tyrannical government to dominate its own people, they have to expose their ego to the entire world.

Soviet Russia did it, Nazi Germany did it, North Korea does it, and China does it. When they have a world platform (like the Olympics) they put on a fantastic show of how great they are. And when you have a slave population that numbers in the billions, you can get a lot done. When you shoot people who fail, they tend to be extremely careful when being watched.

But for all of these tyrannies, its built on a lie, a house of cards propped up by will and debt on the backs of miserable servants crushed beneath the demands of the few in power. Nazi Germany was doing great as long as it could rob nations it conquered, stole from the Jews it murdered, and used a huge population of slaves worked to death. Once that all ended, Germany was financially gutted. Soviet Russia could put on a wonderful show as its people starved and it went bankrupt. North Korea builds entire empty cities to show off but its people are literally shrinking because of the lack of food.

And China is in the same boat. Its magnificent economy and growth is based on a pile of lies, corruption, debt, and fantasy. If you have family in China, or friends there, tell them to get out as soon as they possibly can - and the government lets them.

After decades of open communism which sung the song of the left every year "it will get better, just trust us and give us more power" the economy is more open and free. The government is still in absolute power but does virtually nothing except protect its wealth and power. Mark Kitto writes in Prospect Magazine:

In rural China, village level decisions that require higher authorisation are passed up the chain of command, sometimes all the way to Beijing, and returned with the note attached: “You decide.” The Party only steps to the fore where its power or personal wealth is under direct threat. The country is ruled from behind closed doors, a building without an address or a telephone number. The people in that building do not allow the leaders they appoint to actually lead.

Ultimately the leadership does its best to avoid all possible responsibility before making a decision, that way if it goes wrong, they aren't to blame, but if it goes right, they were the ones to make the decision and gain the glory and rewards. Typically decisions are passed on to someone else. Like most leftist regimes, China sacrifices its future for short term benefits, such as purchasing massive US debt it cannot possibly call in or sell. It has artificially kept interest rates lower to encourage investment which damages their economy as it has the US.

This fixation on earning and the short term has created a desperately unstable and unsustainable situation in China. Instapundit Tom Wheatley writes:

The whole system here is rotten to the core and can’t be sustained. The real estate bubble here is real and insane beyond belief, and when it pops all hell is going to break loose. Municipal governments are drowning in so much debt they make California look like a model of fiscal responsibility. The environment is filthy. Private enterprise is being choked. Corruption is rampant. The legal system is a joke. Property rights are non-existent. Chinese people are getting fed up and can actually connect using social media.

Everyone hopes that when the collapse happens it will do minimal damage, but the more informed are concerned about how it will play out in China.

Will China for the first time in its history face crisis without the deaths of millions? Will the Chinese government use an invasion of Taiwan or Phillipines, Japan or some other nearby country as a way of covering up or distracting its people from the economic disaster?

The left loves China because of its top down control of economics and its massive public works. The government taxes little, earning money instead on selling 'land rights' and kickbacks and spends it on making the country look nice. In other words, China is one long "stimulus" spending package with roughly the same positive results.

The environment is so horrific that you can barely see the public works. Selling land rights to corrupt officials has driven the value of real estate so high it is impossible to continue. The public works are done on the backs of workers who couldn't pass educational tests: the winners get great jobs in the city, the losers go back to the farm and work all day in grinding jobs for little pay. And the governments plunge further and further into inconceivable debt while spending more and more to keep people from feeling the negative effects of their policy a few more days.

China is exactly what you get when you follow modern leftist ideology about the economy. It can produce amazing looking results, but at a horrendous cost down the road which inevitably will come to pass, and sooner than you plan for.

When China lands, we will feel it around the world, but not from a jump... from a collapse.
Posted by Christopher R Taylor at 9:51 AM