"A righteous man who falters before the wicked Is like a murky spring and a polluted well. " 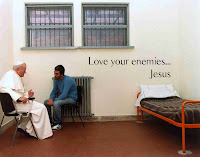 One of the more tedious things Christians have to put up with is the tendency of leftists trying to use the Bible against us. Its as if they think Christians have not read and studied scripture for two thousand years, arguing and examining it with some of the greatest minds in human history (Aquinas, the Apostle Paul, etc).

For example, the Chick-Fil-A restaurant bit lately. There's been not a few leftists who say "oh you believe the Bible on homosexuals do you? Well how about this..." then they bring up Proverbs 25:21

If your enemy is hungry, give him bread to eat; And if he is thirsty, give him water to drink

Then they say "go to Chick-Fil-A and ask for water, see if they give it to you free, and if they don't they are all hypocrites!!!" Now, there's a basic problem with this.

Proverbs isn't law. It is a book of advice. As I said in my Answer a Fool essay:

proverbs are like advice, you don't take them as rules or laws, you take them as pieces of wisdom to apply in their appropriate situation. If your child is about to walk in front of a bus, you ought not hesitate to save them. If you are about to send your bank account to an Ethiopian Prince so he can send you $100,000, now its time to look before you leap. Both proverbs are true and wise - in their place.

Here's the part of the proverb that they don't quote, the rest of that particular wise bit of advise:

For so you will heap coals of fire on his head, And the Lord will reward you.

The point isn't so much that you're supposed to give everything to everyone who wants it, but that you are to treat enemies humanely because that will waken their conscience, force them to think about how they are treating you and why they are your enemy. So it wouldn't necessarily be a bad idea for the restaurant to do this, but its optional. That's up to the individual's conscience and their decision.

And just because the head of a company holds a religious position doesn't mean every single person who works at that massive franchised company does. I guarantee you that if you went to the owner of Chick-Fil-A and said "I hate you, but I'm thirsty could I have some water?" they'd give you some, if possible. Incidentally its often policy to give people water for free at most restaurants, I don't know how it is at Chick-Fil-A.

The problem here is that its yet another leftist thinking he is so very clever and trapping people with their scripture. But they end up looking like fools because they don't understand what they are saying or even who they are talking about.

And in the end, what they should be considering is why they're calling every single human being who works at a fast food joint their enemy to begin with. If you consider yourself tolerant, diverse, inclusive, and someone who opposes hate, why are you declaring everyone who works at a store your enemy? There are hundreds of thousands of employees at this place, and they are all your enemy?

How very tolerant of you.

Where Christians do have a responsibility is to respond to this sort of person with patience, love, and wisdom, not snark, abuse, or mockery. Yes, they are fools, but that's just one more reason to treat them with patience. If they are truly foolish, then they should be treated as such, not as a monster.

Just because someone is making a fool of themselves over a restaurant doesn't mean they should be your enemy, even if they think they are an enemy of you. They're just one more person we are called to love in scripture, to treat with dignity and patience, because they're in the dark. Show them the light.
Posted by Christopher R Taylor at 7:32 AM

I agree the free water thing is lame. What these people should be doing is starting a "Chick-Fil-A supports polygamy" campaign.

There was actually an uploaded video today (posted at The Jawa Report: http://mypetjawa.mu.nu/archives/213125.php) of an angry protester getting free water. I've also seen references to local churches giving out bottled water.