"We, the people of the Confederate States, each State acting in its sovereign and independent character, in order to form a permanent federal government, establish justice, insure domestic tranquillity, and secure the blessings of liberty to ourselves and our posterity — invoking the favor and guidance of Almighty God — do ordain and establish this Constitution for the Confederate States of America." 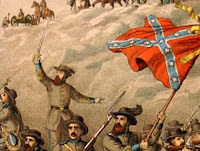 At some point I'll probably do a common knowledge about the US Civil War, because there is a great deal of confusion about the events of that awful period, on all sides. However, there is a part of that conflict which isn't widely know and which I think really ought to be brought to greater attention. I'm referring to the Confederate States Constitution.

Written and adopted in 1861, it was a mix of really great ideas and sadly bad ideas, mostly the good. As it was created almost a hundred years after the original US Constitution, it was written to respond to problems, confusion, and gaps in the original document as well as to more carefully cement the rights and sovereignty of states.

Little is mentioned of slavery in the document, unlike what many would expect. The primary interest was to create a nation much like the original United States, but better protected from creeping tyranny by the government and to limit federal power more clearly.

For example, Article I, Section 2 allowed state legislatures to impeach federal officials who live and work exclusively within their borders. In other words: they could throw a federal judge out of office, for example, if he worked only in that state.

Another really great idea was the restriction of legislation to single specific subjects, and requiring that to be in the title of the bill. No more omnibus bills, no more comprehensive anything, no more 2800 page legislation.

Or take Article I, Section 4 which specifically insists that individual states can amend or make new rules as long as they do not directly conflict with rules in the constitution - in effect codifying "negation" as a concept for states. Don't like that federal law? Well if its not in the constitution, this state will just ignore it.

The Confederate constitution codifies a line-item veto for the president, but if anything is thus vetoed, congress may overrule it with a 2/3ds majority vote.

The presidency was limited to a single six-year term rather than (at the time) unlimited four-year terms.

And as you'd expect from something written decades later, the Bill of Rights was folded into the Confederate Constitution and was part of the text rather than a set of amendments.

Then there were some modifications to parts of the US Constitution which would have saved us a great deal of problem, spending, and governmental abuse and meddling. In the United States Constitution, Article I, Section 8 states in part:

But the Confederate Constitution deletes the words "general welfare" which has been the source of so much usurpation of power and loss of liberty in America. It also adds these words:

...nor shall any duties or taxes on importations from foreign nations be laid to promote or foster any branch of industry; and all duties, imposts, and excises shall be uniform throughout the Confederate States.

This would specifically prevent the US congress from favoring, protecting or targeting any specific business or industry.

Another similar change is this to Article I, section 8:

To regulate Commerce with foreign Nations, and among the several States, and with the Indian Tribes.

The Confederate constitution adds these words, to specifically counter certain legislation and activity that the federal government was engaging in:

...but neither this, nor any other clause contained in the constitution, shall ever be construed to delegate the power to Congress to appropriate money for any internal improvement intended to facilitate commerce; except for the purpose of furnishing lights, beacons, and buoys, and other aids to navigation upon the coasts, and the improvement of harbors and the removing of obstructions in river navigation, in all which cases, such duties shall be laid on the navigation facilitated thereby, as may be necessary to pay the costs and expenses thereof.

Now consider. Both of these changes are quite good, they would for instance end the loans to places like Solyndra and stop a lot of cronyism that has long, long plagued the US and has gotten even worse lately. It would reduce federal interference with commerce and leave states up to deciding their own regulations and how business is done within its borders.

However, at the same time this coincidentally would prohibit the US federal government from outlawing slavery. Which is partly what the confederates wanted to prevent from happening. Now a constitutional amendment would still ban slavery, and in time it would have taken place, but that's something to consider. The general theme of states rights and getting government out of meddling with the economy is good, but it has bad sides too.

Further, this constitution gave the power for impeachment to the House of Representatives alone, not requiring a Senate vote. It was very broad in its focus on states' rights, even allowing states to issue credit, which the US Constitution does not permit. States were able to tax ships and make waterway treaties, both of which gives them significant power (particularly coastal states) for money making and control of their territory.

However, states were prohibited from taxing each other without a 2/3rds majority vote from the federal Senate and House nor could any tax be laid on any item produced in a state without that vote, which would be quite good for states.

And there was quite a bit about slavery in the Confederate Constitution, which flaws its otherwise brilliant construction.

The Confederate Constitution specifically adds slavery into a clause (Article I, Section 9) of the US Constitution:

No bill of attainder, ex post facto law, or law denying or impairing the right of property in negro slaves shall be passed.

Note "negro slaves" not just "slaves." That means white slaves (such as indentured servants), Indian slaves, or Asian slaves, such as Chinese, were not so covered. The specific focus on negro slaves was repeated several times.

The rights of citizens to retain and treat slaves as property was also protected quite carefully in the constitution, and requires any state that joined the Confederacy to recognize and permit slave ownership.

Like the war its self, the motivations were a mix. There was good reason to be alarmed at the behavior and laws of the federal government in the United States. The southern states had good cause to be upset at how their sovereignty was being abused and how the constitution was being ignored by the federal government. One of the first things George Washington did was to attack southern states for not paying taxes on liquor - the genesis of all those clauses about trade.

Yet it was all tainted by a fixation on slavery. Slavery wasn't the cause of the Civil War, but it was the core of the cause. States rights to own slaves was what drove things to war. The conflict over state sovereignty and power had been ongoing for decades, but war happened when it focused on slavery.

Without the parts on slavery, the Confederate Constitution was actually quite good. In fact, in many ways, it was superior to the US Constitution and I do not say that lightly. There were some troublesome ideas, as I noted, and some pointless ones (one six-year term for president?) but the overall build was quite good and would have blocked a significant amount of socialist and foolish ideas that have plagued our country for almost a hundred years.

So its sad in a way. By being part of the Confederate Constitution, these principles are forever stained by association with slavery. By being part of the south's struggle to retain slavery as an institution against federal force, concepts in this document are now difficult to even bring up without being smeared by their origins. Its unfair, but not entirely unreasonable.

And we're all paying a pretty high price for that today.
Posted by Christopher R Taylor at 11:42 AM