"In a rebellious culture, rebellion is meaningless." 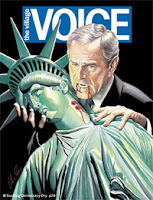 Matt Groenig, creator of the Simpsons and Futurama got his start in alternative publishing. These cheap newspapers and magazines carry odd and radical writing and cartoons like Politnessman, Life is Hell and so on were published by these small outfits. That's where stuff like The Nation came from, and local publications like Willamette Week are still being put out in cities. Usually free and stacked outside coffee houses and used CD shops, you can get them to read while you snack.

Well in part they're facing the same problems as any publication: people don't read magazines as much any more. Most are free, though, so subscription loss is less of an issue. Another reason is that advertisers are tending to go to online instead of buying anything from a paper. Its free to advertise on Craig's List, as opposed to just cheap in Alternative Weekly. And of course, costs have risen, so its difficult to afford to publish.

But another major reason is given by the site Sultan Knish (courtesy American Digest). Daniel Greenfield writes:

The way that the Village Voice used to cover Republicans is now the way that every media outlet, but the handful that aren't part of the liberal collective, covers Republicans.

You used to have to go to these alternate rags to get theories about how Romney is a felon for not paying taxes, for screeds about how Ryan wanted to redefine rape, and so on. You couldn't get someone accusing Republicans of Racism for saying the president was athletic outside the pages of an alternative magazine, you didn't get lunatic screeds like MSNBC regularly features in ostensibly mainstream productions.

Greenfield blames President Bush, and I think he has a point. Its not that Bush was so awful that the world went crazy, its that the left went completely nuts at that point. In the 8 years Bush was in office the left, the legacy media, and the Democratic Party which all intersect so much went utterly insane. Now what was once restricted to the fringe has become mainstream. The first real indication of this was putting Howard "the scream" Dean in charge of the Democratic Party. And its gone downhill since then.
Now the most crazed and outrageous comments are mentioned with a completely straight face on national TV. CNN will report and comment on the kind of thing that wouldn't have been seen outside alternative publications. Its as if the super radical right wing took over the media, as if the kind of thing you'd see in Soldier of Fortune magazine's back page ads is on the front of the New York Times now.

Its odd to watch, but that means the radical has become the common and Village Voice just doesn't have an audience any longer. And because the left is trying to mainstream their fringe, because the entertainment media is made up of people who buy into the 9/11 conspiracies and Bush AWOL forgeries, that makes ordinary America seem demented and outrageous by comparison.

I think that's why things such as the Chik-Fil-A controversy happened. Mayors so cocooned into this sort of ideology, surrounded by radical left thought believed it was perfectly reasonable to use government power to shut out and punish a company for the ideas of its owner. And I think the reaction by people who stampeded into the restaurant by the tens of thousand to make a statement was a response to this shift in the culture.

Its not that Chik-Fil-A was some moral titan or people necessarily supported the owner's ideas - although I suspect many did - its that ordinary Americans are getting plenty sick of the radical left pushing their extremist idea of the world on everyone and said ENOUGH.

The Democrats are planning on turning the Democratic National Convention into the rape and abortion festival, they want to hammer this all three days like a drunken bum ranting about bugs in his beard. And the more they push this, the more annoyed and offended regular America will beecome, I suspect. I think they're going to Wellstone this convention, pushing something beyond what people find acceptable in a mistaken idea that they have a terrific opportunity to turn things around for their president.

Maybe they're right. Maybe I'm old and out of touch and America really has changed all that much but... I doubt it. I think this is a serious misstep on their part. Time will tell. But I often find myself wondering what on earth happened to the world these days. I feel so totally out of place and lost compared to the culture around me.
Posted by Christopher R Taylor at 10:55 AM

I don't think you are old and out of touch, I think you along with many others of us were intimidated by all of the "mainstream" media. We each thought we were alone in believing the culture around us was changed.

When the tea party people started to find each other and realize that each of them and each of us were not all alone in our beliefs after all, a momentum began which has given people the courage to stand up for what they believe.

Chic fil A was just one of the many iterations of how this is now working its way through the culture.