A TALE OF TWO STORIES

"Fortunately for serious minds, a bias recognized is a bias sterilized."
-Benjamin Haydon 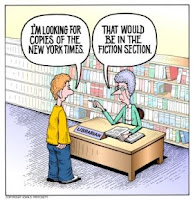 Take a look at two news stories recently by the Associated Press.

The first is a story about former Alabama Governor Siegelman:

Former Alabama Gov. Don Siegelman is headed back to federal court for a new sentencing hearing for his conviction on bribery and other charges.

Federal Judge Mark Fuller will decide Siegelman's new sentence in Montgomery on Friday and could order him to immediately return to federal prison after more than four years of freedom.

Siegelman and former HealthSouth chief Richard Scrushy were convicted in 2006. Prosecutors say they arranged $500,000 in contributions to Siegelman's campaign for a lottery in exchange for the governor appointing Scrushy to a hospital regulatory board.

Nowhere in the entire piece is the man's political party mentioned. He's a Democrat. Next we come to another AP story.

This one is about the head of the Bonneville County Republican Party. The headline?

Courts rule Idaho GOP official can keep $500,000 of alleged Ponzi profits
The man's party affiliation is mentioned twice, both in the headline and the first paragraph of the story. Both mentions are in a negative connotation. What happened to this man? Well he got caught up in a Ponzi scheme early on and encouraged others to invest too. He made money, as early investors often do, and the courts ruled he had to give people he'd encouraged to invest back their funds, but committed no fraud.

He wasn't part of the ponzi scheme. He was a dupe like the rest who encouraged investment in good faith. That's made clear later in the story, but the headline leaves you wondering why a politician got away with a crooked scheme, the dirty Republican!

I would let stuff like this slide but... it never hurts to have examples on record and to remind people of what we're up against. To get the story out, we have to work around the system because we're stonewalled by the press, the entertainment community, and academia.

That's why the Reid pederasty story is out there. Not because anyone really thinks its true or because we're trying to smear Reid but because its the only way to end run around the press obediently reporting a second hand hearsay from a fictitious and anonymous person about a total lie. It forces coverage and attention on something they will avoid, it does the job they won't do which is to get folks to stop and think about how rational and proper that kind of reporting is.

When they have their finger on the scale, as a commenter I read put it, you have to find a way to even things up.
Posted by Christopher R Taylor at 11:00 AM