THE WORLD IS STILL NOT WORTHY

"About 45 million, or two-thirds of all Christian martyrs in the history of the church, actually died in the twentieth century"
-Antonio Socci, The New Persecuted: Inquiries into Anti-Christian Intolerance in the New Century of Martyrs 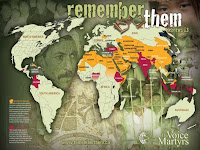 Christians continue to be persecuted, attacked, and killed around the world, primarily in Islamic regions. The worst atrocities lately have been in Northern Africa, with horror stories of bombed churches and gunfire at church services.

Nigeria has been struggling with Muslims attempting to destroy Christianity by force. Muslim gunmen invaded a church in Gombe, killing at least six and wounding many others. Later, Fulani Muslim attackers chased fifty Christians into their pastor's home and burned them alive in Matse Village. This atrocity was part of a raid in the area by Muslims on villages in the area:

Those killed today were attending the funeral of 63 other people killed earlier yesterday in Karkuruk village in Barkin Ladi local government area when the assailants returned to kill more people with guns and machetes.

Churches are attacked weekly in Nigeria as part of a concerted effort to destroy and drive out Christians from the nation. A man who set off a bomb in a church on Christmas last year was arrested finally, but then escaped conveniently and has not been seen again.

Seventeen Christians were killed and forty wounded in Kenya in an assault on two churches. No one is exactly sure who is responsible for this attack but authorities suspect Somali rebels.

Egypt in particular has been troubled lately. Mobs attack churches for having non-Muslim construction and Christian symbols. Christians are accused of insulting Muhammad and attacked, even imprisoned. Muslims claim that Christians hold women captive and force them to convert to Christianity, prompting attacks on businesses and homes owned by Christians.

In response the ruling military junta holds "reconciliation" meetings in which Christians are forced to 'forgive' their attackers - ceding any legal rights of redress.

Elsewhere, Christian aid workers distributing humanitarian goods in Kyrgyzstan were ordered to stop, then attacked by a rock-throwing mob of Muslims and beaten.

This is going on, daily, around the world, and gets little attention. These men and women are suffering and dying for their faith, almost always because of Muslim religious hatred - although there is plenty of persecution in tyrannies such as China going on as well.
Posted by Christopher R Taylor at 8:29 AM