"The idea is to get the vegetable seed industry interested" 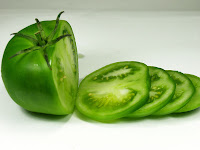 My mom has a garden every year, although over time its gotten smaller because she can't get out as much as she would like. From that garden come loads of tomatoes, and that's always something to look forward to. Food from the garden is always better, but especially tomatoes because of what they're like in a store.

You can eat a tomato from a store, its technically edible. But it has virtually no flavor and almost totally the wrong texture. Its like eating a bizarre tomato substitute, like a soy hamburger. And scientists have discovered why. Gina Kolata at the New York Times writes:

The unexpected culprit is a gene mutation that occurred by chance and that was discovered by tomato breeders. It was deliberately bred into almost all tomatoes because it conferred an advantage: It made them a uniform luscious scarlet when ripe.

Now, in a paper published in the journal Science, researchers report that the very gene that was inactivated by that mutation plays an important role in producing the sugar and aromas that are the essence of a fragrant, flavorful tomato. And these findings provide a road map for plant breeders to make better-tasting, evenly red tomatoes.

The discovery “is one piece of the puzzle about why the modern tomato stinks,” said Harry Klee, a tomato researcher at the University of Florida in Gainesville who was not involved in the research. “That mutation has been introduced into almost all modern tomatoes. Now we can say that in trying to make the fruit prettier, they reduced some of the important compounds that are linked to flavor.”

There's a good reason they taste like cardboard: they were genetically engineered to do so. Sure, it wasn't deliberate, and it took hundreds of years of careful management, but that's what the result was.

See, tomatoes don't ship very well, so you have to pick them green, almost ripe, and deliver them to the store that way. A green tomato is a lot tougher than the fully ripe red ones, and nobody wants to buy crushed, split tomatoes at a store. Sure, you'll put up with that from your garden but nobody wants to pay for that kind of thing.

So the tomatoes are hit with a certain kind of gas (ethylene) which all ripening fruit naturally produces, helping other nearby fruit ripen. They arrive in the store turning red and in a very short time are ready to go on the shelf. You can do the same thing, more slowly, by putting a few green tomatoes in a sack and waiting a few days.

The problem is that these super zowie tomatoes that have been developed lack some of the flavor that older kinds had, and when you ripe one off the vine, it loses even more flavor. There are various compounds - mostly sugars - that a vine-ripened tomato gets from the plant which enhances flavor. So it doesn't just turn red and softer, it gets more flavorful.

The result? You take that beautiful red tomato home, slice it and it looks right, but tastes like wood pulp and has an odd texture. You can get somewhat better results (for more expense) from vine-ripened tomatoes or getting them at a local farm market, but they still aren't quite as good as they once were. That affects sauce, soup, everything you put tomatoes in.

And to compound the situation, a lot of restaurants use less than entirely ripe tomatoes in their food. Check your burger next time you get one with a tomato. Look at that slice, slightly green? A little too hard? That's because they store and can be used easier. A fully ripe tomato is so juicy it isn't easy to use. If you run Qwik-E-Burger and you need to build 10 burgers in a hurry, sloppy wet tomatoes ruin them, particularly under that heat lamp. They don't store well, they spoil faster. So you use more green ones for a nice solid slice that stores well and tastes even worse than usual.

Scientists are working on how to develop a tomato that tastes better and still looks good, but they will be using... (drum roll)... genetic engineering to do it. Yes, the horror. Sure, that's all the previous cross pollination and splicing ever did. But its faster, and its new, and it sounds scary so people scream when they hear about it.

So will we ever get good tomatoes again? Maybe. Not in some places, though. Sorry Europe.

Incidentally, you can make green tomatoes taste good. Fry them up in a simple batter, or just with spices and they're great. You can grind them up for some tasty relish too, if you want, or just pickle them. They just aren't very good on sandwiches.
Posted by Christopher R Taylor at 8:10 AM