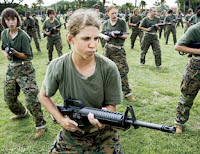 I predict that by the end of his presidency, President Obama will open up all combat positions in the military for women*. For one reason or another, this has long been a dream of the left but the members of the military its self are of a different opinion.

Marine Captain Katie Petronio, a female in the military herself wrote a piece for the Marine Gazette entitled "Get Over It! We Are Not All Created Equal." In it, she makes a strong argument for women being distinct from men in military service:


I am not personally hearing female Marines, enlisted or officer, pounding on the doors of Congress claiming that their inability to serve in the infantry violates their right to equality. Shockingly, this isn’t even a congressional agenda. This issue is being pushed by several groups, one of which is a small committee of civilians appointed by the Secretary of Defense called the Defense Advisory Committee on Women in the Service (DACOWITS).

Their mission is to advise the Department of Defense (DoD) on recommendations, as well as matters of policy, pertaining to the well-being of women in the Armed Services from recruiting to employment. Members are selected based on their prior military experience or experience with women’s workforce issues.

I certainly applaud and appreciate DACOWITS’ mission; however, as it pertains to the issue of women in the infantry, it’s very surprising to see that none of the committee members are on active duty or have any recent combat or relevant operational experience relating to the issue they are attempting to change

She argues that the combat soldiers are the ones that will have to deal with policy and they should be the most critical voices. And she points out why women in combat would be a problem: women cannot sustain combat operations like men can. Its a physical difference, a basic human design distinction.  Captain Petrino mentions her physical qualifications, which are impressive:


At 5 feet 3 inches I was squatting 200 pounds and benching 145 pounds when I graduated in 2007. I completed Officer Candidates School (OCS) ranked 4 of 52 candidates, graduated 48 of 261 from TBS, and finished second at MOS school. I also repeatedly scored far above average in all female-based physical fitness tests (for example, earning a 292 out of 300 on the Marine physical fitness test.

She was in far better shape than I am, to say the least.  However, she went out into the field and worked with men in combat operations and quickly discovered that despite being in such fine physical condition and so fit her body broke down and she could not keep up. Initially she was fine but a woman's body is... wait for it now... different than a man's and it is unreasonable to presume they can sustain exactly the same activities with equal results.

There is a drastic shortage of historical data on female attrition or medical ailments of women who have executed sustained combat operations. This said, we need only to review the statistics from our entry-level schools to realize that there is a significant difference in the physical longevity between male and female Marines. At OCS the attrition rate for female candidates in 2011 was historically low at 40 percent, while the male candidates attrite at a much lower rate of 16 percent.

Of candidates who were dropped from training because they were injured or not physically qualified, females were breaking at a much higher rate than males, 14 percent versus 4 percent. The same trends were seen at TBS in 2011; the attrition rate for females was 13 percent versus 5 percent for males, and 5 percent of females were found not physically qualified compared with 1 percent of males. Further, both of these training venues have physical fitness standards that are easier for females; at IOC there is one standard regardless of gender. The attrition rate for males attending IOC in 2011 was 17 percent. Should female Marines ultimately attend IOC, we can expect significantly higher attrition rates and long-term injuries for women.

In other words, very few women can even hope to equal what men regularly are able to do, and cannot in her experience maintain that level of combat readiness. As she says, there's almost no data out there for women in extended combat, so there's no way to be sure, but the information tends to suggest a problem. Her argument is that men handle brutality, stress, strain, and the continual physical punishment of extended combat duty better than women, and I am totally confident she's right.

A woman can be very fit and capable in theory, she can be the equal of men or even superior of many in exercises and testing, but when it comes to the horror and grind of combat, she will inevitably fall behind because of her basic biology.

But that's not what this push is about. The people who want women in combat are not interested in whether those women will be effective combatants or what it will do to them. They have entirely different motivations.

A close second is the idea that women must be perceived as at least equal and even equivalent to men in every conceivable situation and instance or it is unfair and unjust. The argument here is that its wrong to keep women out of combat, since they can be every bit as good as men and its not fair to those women to exclude them.

The third reason is a bit less open and honest. There are not a few people who want the draft to be reimposed on the general public because that would make war less publicly acceptable. The purpose isn't to build up the military or create a fighting force, but to make war politcally poison so we just don't do it. This sort of person is opposed to war per se, they want no war, ever, for any reason, and the draft is a tool toward that end.

Similarly, women in combat positions would make people less inclined to fight wars, they believe. Having girls out front in combat fighting and dying would be shocking and discomfiting to those inbred red state Jesuslanders who are so bloodthirsty, they argue, and this would stop war from happening so often.

And finally, there are those who argue that this is a major untapped source of person-power, which would help the military do its job, in theory at least.

The fact is, the military is interested not in equality, not in social experimentation, not in fairness, but in one thing: results. It is almost entirely merit-based when it comes to combat, and if you cannot cut it, you're out. Sure, you can have a career based on political skill, deception, and charm, but when the bullets start to fly, you find out pretty fast who it was that got their position through this rather than ability.

From the military's pure perspective, if women cannot do the job, they have no place in that job, period. The job of the military is to fight and defend, and anything that reduces or harms its ability to do that is bad and should be avoided, if possible. Adding women into the mix certainly makes matters more difficult, Captain Petrino argues, and she does so very persuasively.

And really, war is hell enough for boys, why would you want girls to to face it?

*UPDATE: And its happened with just a decision by Leon Panetta.
Posted by Christopher R Taylor at 9:24 AM

Simple solution, same as civil governments have done for firefighters, just lower the standards and stop the attrition rate of females due to fatigue or physical prowess.