"Will you just shut up about bad news??"
The general public isn't all that savvy when it comes to economic issues. They know about some broad basics like inflation is bad and unemployment is no good, but that's about it. Why these things happen and how to address them are a bit more complicated, and the many other indicators such as industrial purchases and buying power are pretty arcane to most people.

I came across a couple of interesting alternative indicators that are pretty concrete and easy to understand. The first is from Business Insider and its an odd one: the US Garbage Indicator. Basically it measures the bulk and weight of trash collected in the United States and compares that to growth and contraction in the economy. And its pretty dead on: 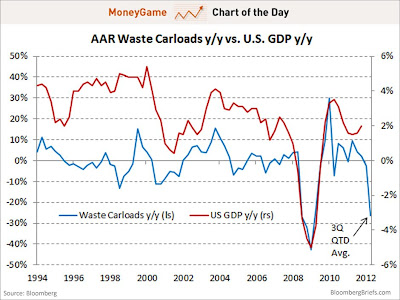 See how it almost exactly corresponds to the economy in terms of growth? The blue line is carloads of trash, the red line is the Gross Domestic Product. Both are measured per quarter and you get that chart. It kind of makes sense, the more people consume (and thus produce to meet demand), the more trash is generated.

Look at the end line. Either something very unusual is happening, or we're not getting, shall we say, the whole picture from the Obama administration. Either way, if history is any guide, we're in for a real problem this quarter - which ends in September.

The second is the Fed Ex indicator. Federal Express is the largest independent parcel delivery service in the world, although there are many others, so that's the name for this one. Essentially it measures the number of packages being shipped around and compares that to economic conditions. Unsurprisingly, the better the economy, the more stuff gets shipped about. The worse things are, the fewer. Steven Hayward at Power Line explains:

Demand for package delivery is about as real-time an indicator as you can get, and doesn’t depend on survey data, statistical modeling, and “seasonal adjustment.” Today’s headline is “FedEx Scales Back Economic Forecasts.” The story says FedEx’s U.S. package delivery volume was off by 4 percent last quarter. They’re scaling back their own in-house economic forecast for the rest of the year. They’re going to take some planes out of service and park them in the desert, and shrink their workforce through attrition.

Part of this is due to the cost of fuel, but the rest is just flat out things are slowing down. Businesses are in the job of making money, that's what they do. They might make shoes or sports drinks or serve you popcorn, but they are there to make money. If they are scaling back, that means there's a problem. Fed Ex isn't going to voluntarily reduce its work force and ground planes unless they are forced to by lack of sufficient business.

The latest economic news had US growth at just over 1%; again, every single growth report the Obama administration has put out has been adjusted down after a few weeks. In other words, are we even seeing growth? And if we are seeing contraction in the US will a president seeking reelection admit that or will they cook the books like the Clinton administration did in 1999-2000 to help Al Gore win office?

Any way you look at it, things are not going well for the world's economy. England for three quarters in a row has faced economic contraction. Leading rating firms are making noises about downgrading England's financial rating from AAA soon (and may have already if the Olympics weren't being held there and wanted to avoid it until after the games). All across Europe, the struggle to keep the Euro and prop up the EU is not going well.

What this all adds up to for me is a warning about the near future. Be ready for things to get even worse.
Posted by Christopher R Taylor at 8:24 AM