WHY ISN'T THIS NEWS?

"There is nothing wrong in this command that we can't fix ourselves."
-General Caldwell 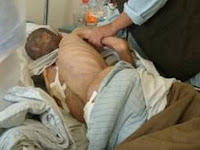 A poster of the Bill of Rights from the US Constitution was torn down from the wall and lay in pieces on the floor, supposedly taken down "to prepare for painting." One patient died from gangrene in his wounds. Patients had drains inserted without anesthetic, surgery with no analgesics while semi conscious, surgery was done in semi sterile environments, feces were found on the floor with open containers collecting blood draining from their bodies. And much, much worse. Bandages left for more than a week untended. The stench of rotting sores.

Cuba? Some third world hell hole? No, Afghanistan. An Afghani medical hospital for wounded civilians in Afghanistan, to be precise. Dawood Military Hospital was funded by American dollars, built by US Soldiers, and run by Afghanis. The wounded in Afghanistan were sent and suffered in nearly unspeakable conditions. Buzzfeed has a series of photos and information. I caution you strongly: do not go there if you have a weak stomach or are eating. It is ghastly at a level rarely seen.

Lt. General William B. Caldwell stonewalled reporting on the hospital - the only way to get changes made - until after the November elections. "How could we make this request with elections coming? [President Obama] calls me Bill." One of the three Colonels who made this report said

"Lt. Gen. Caldwell screamed at these three officers, waving his finger at them for trying to bring in the DOD IG."

The colonels involved are convinced that the delay was due to personal politics, a general seeking to better - or at least not harm - his career. Colonel Geller was asked if he had any reason to believe General Caldwell had delayed investigation, he responded "any reason to believe? I know it for a fact.’”

This makes Abu Ghraib look pathetic. One weekend of making a terrorist suspect humiliated and afraid for a trio of sick perverts to get their jollies, almost immediately reported and acted on? Six months of coverage blaming Bush. Three YEARS of suffering, dying victims, literally rotting and starving in a hospital? Crickets. The Lt General was afraid this might hurt the Obama administration before an election; he needn't have been concerned. This is being virtually stonewalled by the press.

And worse, nobody else seems to want to talk about it, either. Not blogs, not the new media, not anyone. Has Rush Limbaugh even mentioned this? Has it been on Hot Air? Drudge touched on it, but its gone nowhere. This is an unbelievable scandal, but everyone wants to just brush it under a rug and make it go away. Its as if everyone thinks this will hurt their side and wants to just not pay it much attention at all.

Abu Ghraib was ridiculously overplayed, it was insanely overexposed and hammered by the press. This is the opposite, its being absurdly ignored, like a rotting corpse in the middle of a room people walk around and pretend doesn't stink. Those flies are part of the decor dear, its so transgressive and avant garde!

Congress is acting on this, they are investigating not only the situation and leadership that resulted in this ghastly hospital, but the possibility that whistleblowers were intimidated and punished. There has been scant coverage in the press, very brief. There are a few blog posts. But where is the outrage, the horror, and the shock? Where is the coverage? People want this to just go away. It makes our soldiers look bad and its only Afghanis, the right seems to be saying. This may hurt Democrats in an election year and who cares, its military, the left seems to be saying.

And those people in Afghanistan suffered and died for years without hope of anyone helping them, in the most humiliating, helpless of conditions. FOR YEARS. Where is our voice of outrage on this? Where is the cry for justice? Where is our humanity? This is simply shameful.
Posted by Christopher R Taylor at 9:06 AM