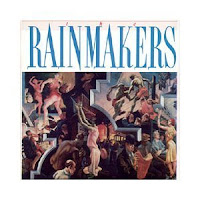 There's a somewhat obscure band that did fairly well during the 80s called the Rainmakers. They didn't get much play on mainstream radio, but college stations and what eventually became known as "alternative radio" stations played them pretty often. The Rainmakers were a bit different from other bands out there, because they were smarter than most bands and their lyrics were a bit more clever.

Although the Rainmakers were a bit too cynical, they did hit on topics other bands would ignore (or take the opposite position, such as Simply Red's Money's Too Tight to Mention). They had a somewhat southern vibe, although they were a quad from Kansas. The band never made it very big but they were pretty popular in the midwest, especially in colleges. European interest in the band had them reform in 1994 and they are back to their original lineup now.

Government Cheese is about handouts, controlling people, and the way giving people things causes them to do more poorly. Unlike most entertainment community types, the Rainmakers seem to understand that if you don't earn something, it means much less to you - and you start expecting and demanding more. Its a good song for our times, but nobody wants to hear it now any more than they did when this came out in 1986.
Give a man a free house and he'll bust out the windows
Put his family on food stamps, now he's a big spender
no food on the table and the bills ain't paid
'Cause he spent it on cigarettes and P.G.A.
They'll turn us all into beggars 'cause they're easier to please
They're feeding our people that Government Cheese

Give a man a free lunch and he'll figure out a way
To steal more than he can eat 'cause he doesn't have to pay
Give a woman free kids and you'll find them in the dirt
Learning how to carry on the family line of work
It's the man in the White House, the man under the steeple
Passing out drugs to the American people
I don't believe in anything, nothing is free
They're feeding our people the Government Cheese

Give a man a free ticket on a dead end ride
And he'll climb in the back even though nobody's driving
Too ******* lazy to crawl out of the wreck
And he'll rot there while he waits for the welfare check
Going to hell in a handbag, can't you see
I ain't gonna eat no Government Cheese

*This is part of the Songs I Like series.
**A note about this series. I actually like Downstream by the Rainmakers more, its their best song I think. But this series is about lyrics and their importance to me, so Government Cheese gets the nod instead.
Posted by Christopher R Taylor at 9:18 AM

Government Cheese is a song with a good hook. Unfortunately, when it comes to the content of the lyrics, it's pretty simplistic and at the same time, takes gratuitous shots at people who are less fortunate. In other words, it takes shots at people who committed the sin of being poor.

This song has an ugly undertone which is that anyone who needs assistance, is not grateful. They don't take care of things and they are "less than." It plays into the myth of the "welfare queen" driving around in her Cadillac which was peddled by Reagan. A myth which had no basis in fact and was overtly racist.

Rainmakers founder Bob Walkenhorst wrote a lyric which is intellectually lazy. He took easy shots at people who are less fortunate than him and that sentiment resounds with the redneck crowd. Even though the song came out during the Reagan years, today it appeals to the Trump voter who screams "build that wall!"

There's nothing wrong with social commentary in art. Woody Guthrie, Bob Dylan and Bruce Springsteen did it much better than Walkenhorst. Exhibit one is Woody Guthrie's "Pretty Boy Floyd" which, among other things, is a commentary on the rich.

Walkenhorst gives us "Government Cheese" and another gem, "Big Fat Blonde." There's a reason why the Rainmakers never went anywhere.