"To be fair, they probably didn’t build them. Somebody else made that happen." 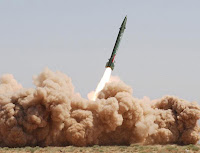 One of the leading theories as to where Iraq's WMD went - don't hand me that nonsense about not having any, Saddam Hussein used them on Kurds in the early 90s - is that they were shipped off to Syria. Before you say that sounds crazy, realize that he sent some of his fighter jets into Iran, a deadly enemy, to prevent them from being destroyed during Desert Storm. And certainly the gigantic caravan of semi trucks heading from Iraq into Syria right before the war started in 2003 suggests something got moved there, and it wasn't gummi bears.

Now that Syria's government is falling apart, some are wondering if those Iraqi weapons will finally be discovered, and others fear that they'll fall into the hands of Hezbollah and other terrorist groups. Syria has been known to have a chemical weapons program for decades, and there was a foiled terrorist attack on Jordan using chemical weapons around 2004. One news report claimed the weapons had come from Iraq, but perhaps they were Syrian in origin.

Yet there are those who claim Syria has no WMD whatsoever, never did, they don't exist. At Legal Insurrection, Professor Jacobson links blog post after pundit assertion that its some crazed right wing fantasy that Syria has any such weapons. Its all those crazy neocons, nobody believes Syria has any WMD!

Except, the UN has long known they existed, and Bashar Assad's Foreign Ministry spokesman Jihad Makdissi recently claimed they'd use these nonexistent fantasy weapons against 'foreign aggressors." Why did this come up? Because Israel has threatened to invade to prevent those fake WMD from getting into the hands of Hamas and Hezbollah.

And why does the left keep insisting that there are no WMD over there? Well I believe there are three reasons.

First, the left's entire worldview is based on a victim/oppressor narrative, so that when they see the middle east they see the oppressed other and instantly leap to be on their side. The west is evil and mean, they tyrannize the middle east by sending hundreds of billions of dollars to them every year. Or something. Stick up for the little guy! They can't be doing any wrong and even if they are, they were forced to by George Bush.

Second, the left is terrified we'll go to war again. They believe that neocons subsist on the lives and screams of innocent victims of war, and lust for it constantly like a vampire lusts for blood. So any time someone notes a problem in the middle east, they freak out and start screaming the opposite just to stop a war from taking place (unless its Obama, then they are conspicuously silent).

Third, they have an entire sequence of positions that started out with the "Iraq has no WMD" insistence. They defended that against discoveries of old artillery shells containing mustard gas and sarin, against discovery of five hundred tons of Yellowcake uranium and devices to create nuclear weapons, should Iraq ever have built another reactor. That was the story and they were sticking to it no matter what. Syria cannot have WMD in it, or some of that may have come from Iraq and their entire decade-long tantrum would look even more idiotic than before.

Worse, President Bush would be vindicated and that simply cannot be. Bush is the most evil man that has ever existed, until the next Republican president.

Plus, there's a bonus here: what Israel wants, they want the opposite. So in the face of all evidence, Syria must be portrayed as being devoid of WMD, even if they have to redefine the term to mean "only nuclear weapons."
Posted by Christopher R Taylor at 8:33 AM

Yup. The lefty position that Iraq had no WMDs was always a transparent lie, but they got a lot of mileage from it. Iraq used mass quantities against Iran in that war and some, as you point out, against the Kurds.

They clearly had a large stockpile and decommissioning them is a huge undertaking that could not have escaped notice. They went somewhere. I also recall reading at the time the speculation that the convoys going to Syria prior to the Iraq war were loaded with this arsenal.