"You do recognize the fact that the one place slavery is still prominent today is Africa?" 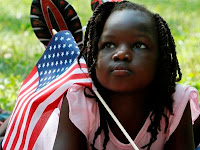 July 4th is the day America celebrates winning its independence from England and becoming a sovereign nation. It is called "independence day" and is usually commemorated with picnics, fireworks, barbecues, and beer. At night around my home, you can hear fireworks and rockets going off for hours, lighting up the sky with sparks and generally giving a sort of feeling what wartime might be like around you, on a smaller scale.

Something I've never quite figured out is that most black people don't celebrate independence day and do not think July 4th is meaningful. This does not make sense to me, and try as I might by reading various websites (and there's some doozies out there) that try to explain why, they just fall short.

The Declaration of Independence reads in its introduction:

All men are created equal. That they are endowed by their creator with certain unalienable rights. That among these are life, liberty and the pursuit of happiness.

Male, female, black, white, tan, purple, it doesn't matter who you are, this should resonate with you and be something you don't just respect but celebrate, particularly in the context it was written. There is even one draft of the declaration which contained these words:

"[The king of England] has waged cruel war against human nature itself, violating its most sacred rights of life and liberty in the person of a distant people (African people), who never offended him; captivating and caring them into slavery in another hemisphere to incur miserable death in their transportation."

This was later removed because while Jefferson and other founding fathers were not particularly opposed to servants in their homes, they considered the systematic purchase and transport of black slaves to be reprehensible and violated the basic right of liberty and equality they championed for all men. The problem was, some states were so dependent on slavery they'd have never joined the fight for independence if this was included, and the effort would be doomed to failure.

That's right, Washington, Jefferson, and many of the founding fathers were interested in ending slavery but could come up with no way to do so that wouldn't break the fragile union apart. They kept slaves themselves as servants of their household, but their desire was to end the slave trade.
Still, Frederick Douglass said this about July 4th:

This Fourth of July is yours, not mine. You may rejoice must mourn. What to the American slave, is your 4th of July? I answer: a day that reveals to him, more than all other days in the year, the gross injustice and cruelly to which he is the constant victim. To him, your celebration is a sham; your boasted liberty, an unholy license; your national greatness, swelling vanity; your sounds of rejoicing are empty and heartless; your denunciations of tyrants, brass fronted impudence; your shouts of liberty and equality, hollow mockery; your prayers and hymns, your sermons and thanksgivings, with all your religious parade, and solemnity, are, to him, mere bombast,fraud,deception,impiety,and hypocrisy-a thin veil to cover up crimes which would disgrace a nation of savages. There is not a nation on the earth guilty of practices, more shocking and bloody, than are the people of these United States, at this very hour.

Now, as a former slave, I can see why Mr Douglass would be so upset. It makes sense that his pain and the horror of his people would overshadow the import of independence day. Its not reasonable, but this reaction isn't really based on reason, its based on pain and experience.

The truth is, without July 4, there would be no "Juneteenth" and there would be no America to be free in. That liberty won by the revolutionary war wasn't just about making an America, it was about a new concept in government, a new kind of country, and a hope and promise to thousands of future generations of what could possibly be done.

When America won its liberty, the whole world sat up and took note, even though it took some time for some areas to find out and understand. There's a reason that the US Constitution is the basis for hundreds of worldwide constitutions, that the US is considered a beacon of liberty by many, and why the history of the world changed after that day. That applies to all people regardless of their ethnic background.

It does not matter what your heritage is, Independence day shook the world and the principles of equality, rights, and fight against tyranny applies to everyone, not just Americans. And that includes you, Chris Rock.

Where does this opposition to Independence Day really come from, then?

What's particularly interesting to me is that in England, blacks are just... English. They do not try to have a unique distinct culture, language, or behavior. They are part of the country and stay that way. They, too, had slavery, and the practice of slavery was ended in that nation scant decades before it was in America. They, too, were captured or bought in Africa and sailed in miserable ships to serve in bondage to whites in a country.

Yet English blacks do not cling to this period in their lives with furious anger and bitterness. They do not seem to define their person and heritage by what took place centuries ago (1807 was the year slavery was effectively outlawed in England). And there's something critical to understand in this.

American blacks are fixated on the past and slavery. They tend to inform themselves and their entire perspective on what happened to other black people almost 150 years ago and earlier. The fact that free black men fought in the revolutionary war - a black man was the first casualty, according to historians - is irrelevant to them. The fact that independence meant the hope of liberty for all is meaningless. They're so fixated on being black that they miss being American.

And that is deeply frustrating to me and a lot of others from all ethnic backgrounds. Most American Indians have become part of American culture, but at least the ones that don't have tribal identity and the sham of being separate nations within the country. Blacks are just Americans, like me, like Asians, like Hispanics, like everyone who comes to be a citizen here. Being part of a country means being part of that country, not living there and trying to be separate.

Because that's what is happening, a deliberate, systematic effort to shame and pressure fellow blacks into being distinct and separate. The whole "Separate but equal" thing that Jim Crow laws tried to enforce? Blacks are doing voluntarily. White supremacists couldn't be happier with blacks refusing to vote, trying to be separate from society, demanding colleges set up "blacks only" student union centers and dorms, and so on. Because that means racial discrimination and separation and that's what they're all about, too.

The truth is, every people in every nation from every ethnic background can look back at extended horrors their people had to endure in the past. Jews, Christians, Anglo Saxons, Asians, it doesn't matter what group you are. We all have some time we can point back to and say "see, that evil happened so now I'm going to complain about it." What you do with that is what matters. And Blacks seem culturally inclined in America to fixate on distant past that happened to other people (many aren't even related to any slaves in America, for example) and define their experience around those events.

It isn't that all do, perhaps not even the majority do, but too many do and they are a strong influence on the rest. And that's just a shame to me. Because Chris Rock's attitude generates animosity and distance, not unity and fellowship.
Posted by Christopher R Taylor at 7:35 AM

Juneteenth is America’s 2nd Independence Day celebration. Americans of African descent were trapped in the tyranny of enslavement on the country’s first “4th of July”, 1776, Independence Day.

It took over 88 years for the news of freedom to be announced in Southwest Texas, the last southern state in rebellion during the Civil War, where enslavement was allowed, over two and a half years after the Emancipation Proclamation was issued by President Lincoln. The dynamic leadership of abolitionist Frederick Douglass was very important to the ending of enslavement in America.

41 states recognize Juneteenth as a state holiday or state holiday observance, the District of Columbia, as well as the Congress of the United States. On the “19th of June”, 2012, Sen. Kay Bailey Hutchinson (R-TX), sponsored legislation in the U.S. Senate to make Juneteenth Independence Day a National Day of Observance in America.

We join our ancestors, Americans of African descent, in the celebration of the announcement of freedom, on the "19th of June", Juneteenth. It was the 13th Amendment passed by the U.S. Congress on December 6, 1865, and signed by the Secretary of State on December 18, 1865, that was the legal action that ended enslavement in America.

The "Modern Juneteenth Movement" recognizes and supports Juneteenth as our National Freedom Day, when we come together as Americans to celebrate freedom from enslavement in the nation.

The "19th of June" and the "4th of July" completes the cycle of Independence Day celebrations in America. You can not celebrate freedom in America without both days.

Together we will see Juneteenth become a national holiday observance in America!

As in previous years, President Obama did not issue a Presidential Proclamation establishing Juneteenth as a national day of observance, but just another impersonal annual Juneteenth statement. Juneteenth has never been celebrated at the White House and President Obama has yet to speak to the public about the significance of Juneteenth Independence Day in America.

The White House and the U.S. Capitol were built by Americans of African descent during the tyranny of enslavement. President Obama should host a White House Juneteenth reception to honor their sacrifice.

However, thanks for supporting, writing and reporting on Juneteenth. Most importantly, Sen. Kay Bailey Hutchinson (R-TX) has introduced legislation to make Juneteenth Independence Day a National Day of Observance, like Flag Day and Patriot Day.

We urge President Obama to do the right thing and join the U.S. Congress to establish Juneteenth Independence Day as a National Day of Observance in America.

Together we will see Juneteenth become a national holiday in America!

I like the idea of Juneteenth being a national holiday too but the truth is, July 4th is the big one.