"Americans are fair people, we have the most generous and open immigration policy in the world."
The standard charge leveled against conservatives and others who want immigration laws enforced is that we're bigots. The only possible reason, they say, that you could ever oppose illegal immigration is that you hate immigrants, fear brown people, and are deep down a hateful racist.

That's partly why any time the topic comes up, critics will drop the word "illegal" entirely, and try to frame the discussion entirely on just plain immigration. It is an attempt to frame their opponents as bigots, as being opposed to immigration, period. That's why you hear people say "this is a country founded on immigration!" They want to ignore the illegal part.

I expect there are some who oppose immigration on this basis, but the truth is almost nobody does. Most people are quite fine with immigration, even like it. We remember the ancestors and older generations in our families who came over (my grandfather for instance) to America. We remember that the nation was founded on immigration. We enjoy pad thai and shawarma and chimichangas, we love Salsa music and Russian models and Irish beer festivals.

The truth is, America has always been proud of and loved immigration. America's very core and culture is based on blending various backgrounds and ethnics into a single united whole in love of liberty and opportunity.

And there's a statistic that detonates the entire "you just hate immigrants" myth that the Wall Street Journal recently published. Here, courtesy Via Meadia, is the truth:

The conventional picture is of an unstoppable wave of unskilled, mostly Spanish-speaking workers—many illegal—coming across the Mexican border. People who see immigration this way fear that, instead of America assimilating the immigrants, the immigrants will assimilate us. But this picture is both out of date and factually wrong. 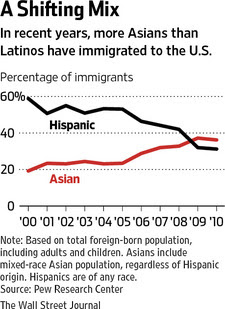 A report released this month by the Pew Research Center shows just how much the face of immigration has changed in the past few years. Since 2008, more newcomers to the U.S. have been Asian than Hispanic (in 2010, it was 36% of the total, versus 31%). Today’s typical immigrant is not only more likely to speak English and have a college education, but also to have come to the U.S. legally, with a job already in place.

See, nobody on the right complains about Asian immigrants. We welcome them. In fact, the only sector that has a problem with Asians is the left because they ruin the minority curve. Asians are hard working, self sufficient producers who achieve, succeed, and prosper without government assistance. They ruin everything by not needing leftist help. Often, inner city blacks have a problem with Asians who run stores and make money off the blacks in the area.

Asians are the largest immigrant force right now, and have always been quite numerous. And we love em. As long as they come here legally, that is. We don't even mind refugees seeking shelter. We just want people to obey they law. See, we judge people primarily by the content of their character, by what they do rather than how they look. Asians don't tend to live off welfare, they don't tend to create slums. That's what we like to see, how we think America should work.

This isn't about racism, its about behavior and legality. We can't stand people breaking the law and being rewarded by government programs we pay taxes to fund.
Posted by Christopher R Taylor at 8:31 AM

With key questions answered by the Supreme Court over illegal immigration, our nation must now analyze the growing problem presented to us nationwide. We now have a fair indicator of what each sovereign State has the ability to do, regarding its own sovereignty provisions? Does the Supreme Court’s ruling reject the main aspect of Arizona’s S.D.1070? NO! It has given Arizona a right to control its borders. The courageousness of Arizona that daring to go against the Marxist, Socialist agenda in Obama’s administration, has been seen by most as ruthless grab on power. Attorney General, Eric Holder forever branded by the ‘Fast and Furious’ gun walking outrage and the senseless murder of U.S border agent Brian Terry will ever be on his conscious; if he has a conscious? This man, thirsting for absolute power decided to teach the Grand Canyon State a lesson and in turn, has turned the majority of law abiding Americans against the Obama administration for his actions.

Arizona can now adopt its original statute; ‘ATTRITION THROUGH ENFORCEMENT’. So rather than take their chances in Arizona, I foresee hundreds of thousands of illegal aliens families fleeing, thereby adding financial torture to the nearest Liberal orientated states like California and Nevada. ILLEGAL ALIENS MUST BE SAYING TO THEMSELVES, “WHY BOTHER WITH A STATE, WHERE YOU COULD BE PULLED OVER FOR A TRAFFIC VIOLATION, WHEN YOU COULD EMPTY CALIFORNIA’S HAMPER OF FREE GOODIES? Hey! California gives free handouts of taxpayer’s cash, so why stay in that border state? Currently California is suffering from a $16 billion dollar deadfall deficit, because of a Liberal Mayor and lobotomized governor. They have been brought upon themselves, by a radical group of politicians who have more loyalty to countries south of the border, than an alliance to the U.S. Constitution. They have allowed the giving of huge amounts of taxpayers’ money to illegal nationals; even as far provide drivers licenses. Soon California and other members of our 50 state unions, will be crying foul? Those states will be monetary hurting even more as the evacuation begins from locations that espouse Arizona’s law. States as Alabama, Georgia, South Carolina, Utah that are already financially hurting from the influx of impoverished people, will adapt their statutes so as not to conflict with federal law.

MY QUESTION IS, WILL ALL THESE CRIMINAL INVADERS GO? WHETHER IT’S MINNESOTA, FLORIDA, TEXAS OR WHICH OF THE 50 STATES WILL BE SUDDENLY OVERWHELMED FROM STATES WITH TOUGH ENFORCEMENT?

THE TEA PARTY WILL NOT COMPROMISE ON ILLEGAL IMMIGRATION. THEY BROKE THE LAW, SO THEY WILL BE DEPORTED.
To really make life hash for illegal alien criminals, our spineless Republicans should assume these two bills without fail. Rep. Lamar Smiths bill ‘The Legal Workforce Act’ (H.R. 2885) better known by Americans as E-Verify. Judging by its success as currently a volunteer law, it has become a remarkable electronic program, which detects unauthorized non citizens hired, but then flagged and can only be resolved by stepping into Social Security offices. No illegal alien would dream of doing that, even if they are in possession of procured ID documents? Of course a mainstream Liberal press has carefully tried to demonize the E-Verify business checking Database?

Second in line, but just as paramount in important is the BIRTHRIGHT CITIZENSHIP (H.R.140) amendment law. This disqualifies illegal alien mothers able to gain immediate acceptance of their unborn baby smuggled through ports of entry, either across the ocean or through our limited border fence defenses. Foothold children are costing $100 billions of dollars in welfare, cash payments, education and health care treatment. Only the obstacle of pro-illegal alien forces in the Democrat and Republican Party and stopping these bills from becoming the law of the land.

What is that old adage, about ‘Those who cannot remember the past are condemned to repeat it’? Something like that?

Therefore we must remove as many incumbents and any politician and retain the services of true TEA PARTY members. Otherwise whether Obama wins, we will just have a second term president ready ‘to Tax and Spend America into the toilet But then we have Mitt Romney and his crew of wealthy politicians, who could cause just as much trouble. The TEA PARTY is now part of the American ideology? Unlike Obama it believes in free will and an individual’s right to choose his own path. The TEA PARTY believes in a government to deal with the basic essentials of defense and so forth, but not getting involved in health care think most American have credence in this issue, as since when does any country other than the United States allow illegal aliens to come here, without true retribution-such as exacting it as a Felony. Wouldn’t you come here if the all you were going to be prosecuted for is a simple civil infraction? . In a new Rasmussen Reports national telephone survey finds that 58% of likely U.S. voters think the policies and practices of the federal government encourage illegal immigration for decades. What we need is a voter revolution against both political parties, because whoever gets in November will repeat the same laws as we have always had. Of course the Left now is crowing about ‘Voter Suppression’ that is far from the truth.

All Americans want is a fair and Equitable election, because currently not? Non-citizens are voting and certain Democrats are allowing this to happen. Remember that large numbers of these people, who will vote for Obama, are those who are playing the welfare system, who want ‘Something for nothing’. I have a family to support, and I don’t want to support the poverty from banana Republics. We have our own disabled, veterans without homes and others; so why are we forced by federal mandate that our money should go to foreign nationals.

JOIN YOUR LOCAL TEA PARTY and put an end to illegal immigration. Put an end to President Obama’s socialistic philosophy and that does not exclude Mitt Romney’s idea of a government. There are thousands of TEA PARTY chapters around the country involved with a new agenda for America. The TEA PARTY statement is securely seal the border; halt the ‘FOOTHOLD’ baby racket, sanctuary cities, dream acts and then talk about building a secure minded fair immigration system, not importing more poverty and foreigners that have to be supported with taxpayer money?

This is the time when every American who believes in the ‘Rule of Law’ and steps forward to let their Senator or Congress person knows how you will vote. Tell the politician’s aide and that you want them to pass E-Verify and the Birthright Citizenship bills. Citizen voters should phone Congress at the central Switchboard at 202-224-3121. Insist YOUR CONGRESSMAN/WOMAN TO fulfill their obligation to the oath of office and stop pandering to the businesses that use cheap labor, or the Democrats who are overlooking illegal aliens who are voting. You have the empowerment of your VOTE to demand they sponsor these to policies or we are doomed to a future, without any restrictions to our out-of-control U.S. deficit.

Nice Post about Denmark Immigration Many peoples want to get it.