GET EM ON EL DOLE

"throw Sebelius & Co. into the same dustbin as the “Happiness Park.” " 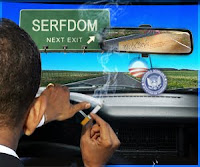 In last Friday's WATN wrap up, I mentioned a series of soap opera-like "novellas" being run on Spanish language media by the USDA. These programs are designed to get more people on food stamps, presenting them as a source of nutritious food. Its worse than I thought.

Senator Jeff Sessions (R-) quotes one of these stories:

“In one of these, an individual tries to convince a friend to enroll in food stamps even though that friend declares: ‘I don’t need anyone’s help. My husband earns enough to take care of us. The first individual replies back: ‘When are you going to learn?’”

That's right, they want even people who don't need food stamps and are self-sufficient to get on them. They're trying to pressure people to get on government help who don't need it and don't want it.

Thankfully the USDA has pulled these off the air, but the damage they've done and the people they've reached are still out there.

And this is a bigger problem than it initially seems. You'll probably be shocked, shocked to discover that according to Judicial Watch, most illegal immigrant families are receiving government assistance.

Census Bureau data reveals that most U.S. families headed by illegal immigrants use taxpayer-funded welfare programs on behalf of their American-born anchor babies.Even before the recession, immigrant households with children used welfare programs at consistently higher rates than natives, according to the extensive census data collected and analyzed by a nonpartisanWashington D.C. group dedicated to researching legal and illegal immigration in the U.S.

Legally, illegal immigrants do not qualify, but if they have a child in America, that child is an American citizen and they qualify. And that's not enough, the Obama administration is working hard, spending tax dollars, to get even more on the dole. Because a voter dependent on the government will tend to vote for the guys who promise more instead of the guys who promise less.

To be fair, I'm sure the USDA mostly was thinking that food stamps won't allow you to buy a lot of prepared foods that are bad for kids and the result would be healthier people but I have no doubt that in the back of their minds was this other benefit, too.

I wouldn't actually mind so much if the US had open borders. But you have to make a choice: will you have open borders to everyone, or will you give out welfare to anyone? Because if you do both, the country will be destroyed. No nation on earth can afford to take care of the entire world's poor as they flood its borders.

Posted by Christopher R Taylor at 9:21 AM