"It's funny - when I ran, everybody said, well he can give a good speech but can he actually manage the job?" 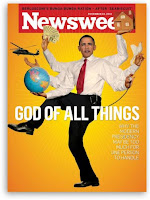 President Obama claims that his biggest failing wasn't his policies, poor leadership, or incompetence, but that he just didn't communicate well enough. Yes, the president who is famous for his communication skills and ability to speak, who won election largely on his speaking ability and slogans... claims he couldn't communicate well.

Why? Well Zombie over at PJ Media helps shed some light with her analysis of the The Little Blue Book by George Lakoff and Elizabeth Wehling. According to these two, the only reason the left fails is because they can't get the narrative across to people. They say conservatives are horrible, evil people who are terrific at fooling everyone, but leftists are wonderful, nurturing angels who just can't seem to communicate. Zombie provides this chart:

And that's always the excuse. Its never "maybe people just don't like our ideas" or "maybe we were wrong" but always "we didn't reach out very well and communicate." The syllogism goes like this:

A: Everyone would agree with us because we are right
B: People don't agree
Conclusion: therefore, we aren't explaining well enough.

The idea that people might just not like the ideas or that they could be wrong isn't allowed in this ideology. Their presuppositions start with being totally right and good, so something is wrong with other people if it doesn't all work out. This is the problem with a logical syllogism, it only works if both propositions are true and appropriate. If one or more is false, then the conclusion is always false.

Lakoff's book argues that the left shouldn't even try to convince or explain, nor should they even respond to the right's arguments and criticisms. Just yell louder, he argues. And that's what President Obama thinks he should have done. Because after all, he's tried so hard, any opposition to him cannot possibly be doing the wrong things or incompetence, it must be that he just didn't communicate well.

And intellectuals - not necessarily smart people but those who pride themselves on being smart - tend to have this problem. In their minds they have everything figured out, and they tend to discount other people's arguments or thoughts as being, well, dumber and thus not worth hearing. So especially when surrounded by like-thinking intellectuals, they can get pretty entrenched and certain of their rightness.

And they think that if only they could get a chance to talk to people, well those people would have to agree, they would have no choice. The sheer rightness, logic, and intellectual power of their arguments necessarily must win over everyone, always. That's why they think war is failure: they didn't get a chance to talk to the enemy and make it all okay. They can convince anyone of the right way, if only they do it right.

And President Obama is exhibit A of that kind of personality. When you combine this with invincible arrogance and certainty, you get someone who cannot see any fault in their actions, merely an inability to reach people enough.

All those speeches, TV specials, emails, talks, glowing, supportive articles, on and on? Not enough, didn't do it right. That must be the case, because otherwise you'd all agree with his incandescent glory. There simply couldn't be any other reason.
Posted by Christopher R Taylor at 8:43 AM