They'll turn us all into beggars 'cause they're easier to please
-The Rainmakers, "Government Cheese" 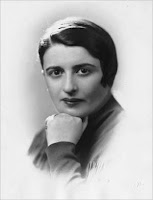 When I finished the previous segment of this series, I thought of something that should have been part of the parts I agree with Ayn Rand on, but didn't want to edit it over the weekend. Its a major part, too, and something I usually focus on but I've been a bit tired lately and having a tough time getting anything written at all.

Ayn Rand understood this. She understood that a society's essential worldview is what drives its direction and its future. She understood that if you know a society's philosophy, you can predict not only what it will do now, but what will happen to it in the future, should that not change. This is more than a sort of 'zeitgeist' or spirit of the age, it is the unquestioned assumptions about life, relationships, culture, meaning, ethics, and more.

Francis Schaeffer wrote about this far more extensively and brilliantly in books like How Should We Then Live? and coined the term "worldview" which defines this overarching, presupposed philosophy of life. Because philosophy is more than dry thinking by bearded men about esoteric and largely irrelevant topics. I highly, highly recommend reading Shaeffer.

Worldview is not "if a tree falls in the wood does anyone hear it?" or "what is the sound of one hand clapping," it is the foundation for how and why you think about things the way you do and what that does to the way you understand life. I've written about this quite a bit, and it is critical to understanding a culture and a movement.

For example, the Tea Party is primarily made up of people whose worldview holds that there are absolute truths and ethics, that obeying the law is the key to a society's survival, that individuals are responsible for themselves, and that power and culture start at the home and build out from there rather than from the top and build down. This understanding of the world is what leads them to oppose big government, overspending, higher taxes, and the nanny state.

The Occupy movement is primarily made up of people whose worldview holds that there are no absolutes, that truth is relative, that one's 'narrative' is what defines their truth and ethics, that doing no harm is the overriding principle of life, and that helping people in need at any cost trumps liberty. They believe that old fashioned principles of virtues, tradition, and culture are what has caused the problems in life, and that individualism is selfishness. From this understanding of life, they then conclude that if you've gotten rich, you got that way by exploiting others to take more than your fair share of the limited sum of resources (and money) in the world, that anyone who does not want to give handouts is bitter and mean, and that government's job is to help everyone be equal in outcome.

These two trains can run side by side forever, and will never, ever meet. They can use the same language, even the same influences yet mean completely different things. And what's more, because one believes in absolutes and the other does not, they have completely different approaches on how to accomplish goals. That's why the Tea Party is orderly and clean, and the Occupy movement is basically an unruly mob that craps on cop cars.

Their worldview is what makes the difference. And Ayn Rand understood that unless America's cultural worldview changed, nothing else would help. All the right politicians and policies and laws and clever advertising and slogans and gimmicks would fail until people change their worldview. Nothing, ever, at any time, will ultimately make a difference. Who is in office will change how rapidly things go wrong or what shape that collapse takes, but until the society changes its worldview, that collapse will take place as inevitably as night follows day.

In Atlas Shrugged, that change took place because of John Galt. In Fountainhead it never changed, it only showed what one man's philosophy was like and called for a change in worldview. in Anthem, the worldview for two people changed by learning past things that the present government and culture utterly crushed. But Ayn Rand understood that this philosophy of life had to change and she wrote in a vain hope of reaching out and helping that change take place.

Ayn Ran understood in a way few people do that this was critical to saving America - and through her the world in a sense. Because if America collapses, there's no America out there to pull the rest of the world out. When America goes, so does everyone else, everywhere, like a stack of cards yanked out from the base. Its been a long, long time since the world has had a catastrophic disaster that ran civilization backward. I fear we're due.

The problem is, Ayn Rand's solution, the substitute worldview she offered, was just as bad as the one she feared. And that's what I'll finally get to in part 3.

*This is part of a 4 part series on Objectivism and Ayn Rand.
Posted by Christopher R Taylor at 9:44 AM

Or, to put it more simply: its the culture, stupid.

"if you've gotten rich, you got that way by exploiting others to take more than your fair share of the limited sum of resources (and money) in the world, that anyone who does not want to give handouts is bitter and mean, and that government's job is to help everyone be equal in outcome"

It's not a new worldview, and I'll probably get in trouble for this, but one can mainly trace the first two (and perhaps the foundations of the third) back to the Irish migration, particularly to the Eastern Seaboard cities.