"If you were foolish enough to buy Barrett's 'internals,' you would have never seen this coming." 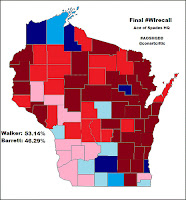 So Wisconsin had its vote last night and it looks like Walker won by around 7% of the vote, remaining in office. That's a wide enough margin the usual "recount until you win" technique of the Democrats won't happen, but expect plenty of accusations of fraud, busing in people, voter suppression, and so on to fly back and forth a few weeks.

Ultimately the election boils down to this: Wisconsin is better off now than it was before Walker took office. The state expects to run a budget surplus for the first time in 30 years. The schools didn't have to lay off any staff, and the economy in Wisconsin is significantly better than nationwide. Voters just didn't care to punish a governor or legislature for making that happen.

In the big scheme of things this is uncertain. I'd like to believe this represents some massive shift in public perspective, a move away from the "what can I vote myself in terms of goodies" tendency of democracies which destroys them all. I'd like to think this reverses the leftward trend of the nation for four or more decades, but I am not that naive.

At best this was a single small battle won against the ideology which states you can keep giving yourself more and more at the expense of voters, that unions should be unlimited and unquestioned in power, and that our nation will run headlong into economic collapse that will drag the entire planet down with us.

One win, in a war of hundreds of losses.

But it is good to see the left pull out all the stops, throw a screaming, kicking tantrum, spend millions, fly in celebrities, bus in union thugs from around the nation, print hundreds of thousands of signs, hold huge protests, and lose. They did their best, they lost, like in 2004. Cities had over-100% turnout of voters (yeah), they had occupy sleeping in the capitol building, they had national press coverage, they got glowing support from all kinds of big time politicians, and the voters simply were not buying.

And I think this should tell the left that they're a bit out of touch. Until about a week ago, many were swearing up and down that Walker was doomed, and there were polls being posted showing Walker in trouble. That kind of isolation might be comforting but its not very helpful.

So for whatever that's worth - and I'm sorry Sarah Palin Obama isn't "toast" because of this win, nor is democracy "dead," MSNBC - it was nice to see. Its just a nice win for Wisconsin's citizens. I hope it transfers to a greater victory nationwide in November, in congress.
Posted by Christopher R Taylor at 9:01 AM

Well said, C_T. The biggest eye opener to me about the situation in Wisconsin: since they first passed the anti-Union laws, 50% of municipal union employees and 30% of teachers union employees have elected to stop having dues withheld from their paychecks, whereas before those dues were compulsory. To me, that's an even bigger rebuke than the elections...