I may be vile and pernicious
But you can't look away
I make you think I'm delicious
With the stuff that I say
I'm the best you can get
Have you guessed me yet?
I'm the slime oozing out
From your TV set
-Frank Zappa, I'm the Slime
Back in the 1990s, pundits warned that newspapers were going to face a crisis as the internet grew in popularity. They noted that people would use the net for most of the things they get out of newspapers, and that would seriously impact the business.

Yet newspapers did very well, all the way into the next century: 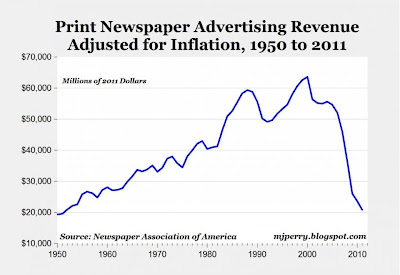 And yet as you can see, that collapse did take place, violently. 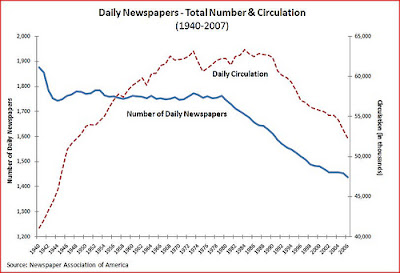 Harry Blodgett, writing in Business Insider makes a very good case that the same thing will happen to TV. He points out that the same thing is happening to television consumption that happened to newspapers; people are replacing it with internet and other sources:

In our household, as in many households, television consumption has changed massively over the past decade, especially over the past 5 years.
If not for live sports, which are consumed by exactly one member of our household (me), there is no way we would be paying for cable TV or any other kind of traditional pay TV anymore.

I find myself in the same situation. If I watch television, it tends to be "on demand" programming rather than waiting for my show to come on. Blodgett argues that while the curve is now still going well for television, a saturation point is going to be reached where people just stop watching TV like they used to - and may have already taken place.

So, what are the key points of this shift in user behavior for the traditional TV business?

Advertising has completely changed, although advertisers haven't caught up with it yet. People skip ads as much as possible. In the past they were an annoying but unavoidable part of life. Now they can be blocked, skipped, fast forwarded past, and just ignored. That means advertising revenue is facing a cliff, when the advertisers finally catch on that spending millions on a network TV show is a waste of cash. 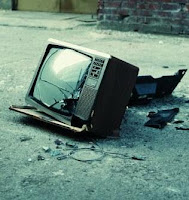 As the internet gets faster and easier to use, as streaming and video gets more sophisticated and smoother, people use it more and more for video as well as print. And as the tools to produce a show yourself get cheaper, easier to use, and more widespread, home made versions of entertainment will grow as well. And all that means disaster for television, he argues.

Honestly, this wouldn't surprise me at all. Consider that each new major form of entertainment tends to kill the previous one. The only one that's managed to survive fairly well is the motion picture industry, but they took a serious hit when television first came out. And before that, radio was king.

Television is riding a long, long high of massive profits that is going to collapse soon if he's right, and I think he is. That means the six- and seven-figure incomes that stars command and the super lavish lifestyle and productions of television shows are going to come to an end as well. Networks, Blodgett argues, are going to be largely a thing of the past, as television shifts more to "libraries" of shows than products for a company. Production companies will be the new model, more than networks. Instead of an NBC show, you'll have a Belisarius show. Instead of costing 18 million to make an episode of a TV show, it will be more modest.

And as a result, we'll enjoy perhaps less fancy products, but more variety of greater creativity. The interesting thing to me is that most of the big cable TV providers are also internet providers. Meaning that they're generating and encouraging their own competition. And as a result, one of them will have to go.

And as a commenter notes at Business Investor Daily, that will mean cable rates are going to go up. Its certain to happen anyway as bandwidth keeps ramping up. Watching shows on Netflix means a ton of data pouring into your house over the internet. That costs your ISP money to handle, and that means they pass that on to you. The more common and standard that becomes, the more expensive it will get.

But if you stop watchign cable TV so much, the cost will be offset. And the more profitable internet becomes, the more competition will arise. And while Cable will not just vanish, carriers will probably become a lot more picky about what shows they carry and bundle. People are getting to the point they just don't care to pay for any of the channels on TV, instead of grudgingly getting Current TV and Oxygen because they are forced to in order to get the channels they actually care about.

We'll see, but I can't find fault in his analysis.
Posted by Christopher R Taylor at 11:40 AM

I think you can expect to see advertisers start focusing on making visible product placement a part of the show itself. To some extend they've always done this, but with fewer people watching commercials I believe we'll see it taken to a whole new level over the next decade.

If the network/advertising model dies (and I agree it very well might, though I don't see it as inevitable), then it won't just be broadband costs that go up, but also content access. Without advertising dollars to pay for the shows, companies like Netflix and Hulu will take the place of the networks and as a result your monthly Netflix subscription will be more like $75.

Making quality content affordable is THE chief issue for Netflix right now. Since they lost their Starz contract last year their streaming on-demand choices are pretty weak, and you don't see new content nearly as much as you used to. Not too long ago we were doing most of our movie watching via Netflix On Demand, but the selection is so poor now that we have gone back to mostly watching stuff recorded on DirecTV, and are considering cancelling our Netflix streaming plan. I wouldn't mind paying MORE for streaming access that had constant updates of new material, but I do mind paying a little bit of money every month for crap I never watch or don't want to watch again.

The main difference I see between television and newspapers is that the content of television isn't as easy to reproduce by amateurs unless they have almost obscene amounts of cash on hand... and as a result, I think the "new wave" will have a harder time displacing the established models... but it could certainly happen.

Very precise blog. The move away from TV and Newspaper shows the control that the public has in reinventing how entertainment and news are consumed. This consumption is positive for the public because it allows the interaction of a dialogue where people can leave comments on newspaper articles or other news venues and even blogs, which report the news. Whereas in the past, the public was unable to have a dialogue/conversation with the TV-- the TV does not talk back and ask for comments. Furthermore, the public can have the ability to make news.