"Okay. It's not literally the case that zero members of the Republican Party have proposed any policy alternatives to the Obama administration." 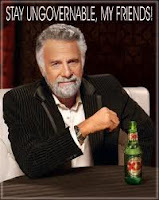 One of the defensive mechanisms we as humans often fall back on is to make excuses for why our theories and ideas of how the world works or we want things to be don't work out. Its why Darwin's theory of evolution has... evolved into something Darwin would hardly recognize or why Christian and Jewish theology has been arguing about things for thousands of years. Every time you hit a wall where things don't seem to fit what you always thought were true, or you hit what appears to be a paradox, you either give up on the idea, or find a way it still works despite appearing to be failed.

Politically this happens an awful lot because some people have as much wrapped up in their pet political ideas as they do their religion. And there's a couple of related excuses that come up like clockwork any time a Democrat fails or is struggling in office.

The first is the "ungovernable" label. This is what istrotted outwhen Democratshave to fight for or cannot accomplish some radical goal like taking over the health care system. Suddenly Americans are too contentious, too divided, too stupid, or too manipulated by corporations, Rush Limbaugh, Fox News or what have you to be governed. Why, those stupid Americans, if they would just do what they are told by their betters, things would be wonderful!

The second is the "Presidency is impossible in modern times" line. The first time this came up was in the Carter administration - the last time a Democrat president was having a hard time being reelected, coincidentally. Back then, the claim was that its just not possible for a president to do the job what with the media scrutinizing and questioning everything. If they'd just shut up and let him do whatever he wants things would be fine!

Kyle Drennen runs down a couple of 1980 examples:

Some voters have entirely discarded textbook notions about presidential greatness and believe that Carter is doing as good a job as anyone could in facing new and difficult problems and in coping with an independent and restive Congress.
-Walter Shapiro, 1980 Washington Post

There's something institutional about the decline. Wayne and others...see a weakening of the presidency since Vietnam and Watergate that makes it difficult for officeholders to fulfill expectations.
-Richard J. Cattani, 1980 Christian Science Monitor

In the Wall Street Journal, James Taranto reminds us of a few other examples:

"It got harder. . . . The rise of single-interest politics and independent legislators has made it more difficult to put together a governing coalition; sophisticated new lobbying techniques wielded on behalf of virtually every interest group further complicate the task. And a strong argument could be made that the major issues--energy and the economy, for instance--are more complex than they were."
-Tom Wicker, 1980 New York Times

Executives of every kind--political, educational, ecclesiastical, corporate--are under incessant public attack." The president's life, Graff wrote, "is under such relentless scrutiny that he can only seem ordinary, never extraordinary. No man is a hero to his valet, and America is now a nation of valets."
-Henry Graff, 1980 New York Times

"Watching President Carter try to juggle all the contradictory foreign and domestic problems of the nation during a presidential election and an economic recession, you have to wonder who can do it and who can govern America,"
-James Reston, 1980 New York Times

And yes, the same thing is being said about President Obama: he just can't do his job in today's environment. Daniel Stone writes in Newsweek:

The presidency has grown, and grown and grown, into the most powerful, most impossible job in the world.

Lost in the chatter about whether President Obama will win a second term in November is an even bigger — and perhaps even more important — question: Is it possible for a president — any president — to succeed in the modern world of politics?

Consider this: We are in the midst of more than a decade-long streak of pessimism about the state of the country, partisanship is at all-time highs and the media have splintered — Twitter, blogs, Facebook and so on and so forth — in a thousand directions all at once.

The presidency is too big a job for any one person.

Lost in the chatter about whether President Obama will win a second term in November is an even bigger — and perhaps even more important — question: Is it possible for a president — any president — to succeed in the modern world of politics?

Consider this: We are in the midst of more than a decade-long streak of pessimism about the state of the country, partisanship is at all-time highs and the media have splintered — Twitter, blogs, Facebook and so on and so forth — in a thousand directions all at once.

Again, the thesis is that the president is just not able to do his job, its just unfair, how can you expect anyone to pull this off? Never mind that presidents before this did it under the same or worse pressures, in fact not long after Carter imploded, people were praising Reagan for how easily and comfortably he seemed to run the office.

Essentially, if someone is no good at the job, or isn't up to the task, the blame doesn't go on them for being incompetent or unqualified, no its your fault as an American who won't just go along complacently.

Unstated in this is that the stupidest, most evil, most incompetent illiterate in human memory - President Bush, according to the left - won reelection comfortably and ran the office quite well for 8 years. He was under far more pressure and the same kinds of problems as President Obama, but you didn't hear whining from him about how hard the presidency is or people claiming the job is just too much for any one man.

To be sure, I agree the job is nearly impossible. These days with loud, easily accessible criticism for every single action taken by the president, from waking up in the morning until falling asleep at night, it would be awfully hard to do. And yes, I think we've gotten to the point in America where we as a nation simply cannot pull off what we once did - the interstate highway system, the big projects like Apollo missions and the Hoover Dam.

But the fault for that lies not in communication or the complexity of the job of presidency but regulations, lawsuits, and advocacy groups finding some reason to block everything, no matter what. Piled on top of that is corruption that tries to find a way to enrich congressmen and big donors in the process of every big legislation and the gargantuan debt piled up by insane overspending for decades in a row so we can't even afford to try anything of that sort. That's not the fault of twitter and Fox News, its the fault of a government so bloated its losing its ability to function combined with radical abuse of the system by extremists.

If you cannot build a power plant anywhere without ten special interest groups blocking every move through activist judges, that's a basic problem with the country. It has nothing to do with how hard the job has gotten or mean people in blogs, though. That's not a function of democracy but of abuse of power.

Again, the excuse making is to avoid the inevitable alternative - this guy just isn't up to the task; he can't do the job - because that conclusion means you shouldn't vote for President Obama at all, and that's simply unacceptable to the left.

And I consider the slow and difficult process of getting anything done in government as a feature, not a problem. For every interstate highway system we can't get done, there's a huge spending bill that we can't either. If its difficult to cut spending, its difficult to take over the health care system, too. The worst legislation we've ever seen take place has been rushed through in response to some crisis - the Department of Homeland Security, for instance.

Meanwhile, President Obama is recycling the same arguments President Carter made against the Republicans in 1980 as well. They'll ruin everything, they're scary, "I see despair . . . I see surrender . . . I see risk." Republicans will force your grandma to eat cat food, Republicans will cut the budget so deeply we'll lose Cowboy poetry and midnight basketball, think of the children!!

And while Romney has failed to capture anyone's imagination or demonstrate that he's a great alternative to a second term of Obama, few people really seem to want that second term anyway. And even if the alternative applicant doesn't set your world on fire, if the guy you're reviewing for his job performance has been lousy... why keep him?
Posted by Christopher R Taylor at 7:26 AM