Fortunes are lost on the women I've seen
But without you... I can't breathe
You're the air to me! 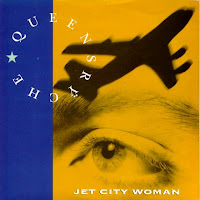 Queensrÿche is one of those Seattle bands that became huge in the late 90s. They had put out several albums before Empire, but that was the one that gave them their peak of popularity. "Silent Lucidity" came out about the same time as "Enter Sandman," and both were basically about dreams and sleep, one darker than the other.

Unlike the previous album Operation: Mindcrime, Empire was a collection of largely unrelated songs, but every one is a stand out and took the band away from niche metal to rock pop stardom. The followup Promised Land was pretty disappointing, and until American Soldier, the band seemed doomed to fade away.

Jet City Woman is one of the best songs on the Empire disc, a love song that would be a throwaway but for three things. First, its about Seattle (Jet City) so being from the Northwest, that holds a greater significance than some generic ballad. Second, although it is a ballad, it isn't played like one. Most hard rock and heavy metal bands will do a quiet ballad song on their works to change the pace and show they have range beyond screaming guitars. Queensrÿche has more melodic songs on Empire but this one is played all passion and fury, like the feelings inside the writer (Geoff Tate). And third, the lyrics go beyond the usual "baby baby I love you" stuff you get from love songs.

I think the lyrics that push it over the top for me are the ones I quoted at the top: he's seem some astoundingly beautiful women, women that men go crazy over, but all he can think of is the one that's back home that gives him his very life. Whether that's true or not, it makes a powerful song.

The song is about someone who has been away from his love so long the pain is more than he can stand. Its about longing for her so much it feels like he cannot breathe, a woman who makes his life have meaning and direction and without her, he feels lost. He's on the plane, almost home, and the gap in his life without her there is so strong he almost cannot stand it.

Anyone who's been in love knows that feeling - especially those who had to be apart for very long. He puts it into song in a way that hasn't been done since Journey did "Faithfully" and in the end, "Jet City Woman" stands apart from the pack, like all the songs on Empire.
Every time I leave
You say you won't be there
And you're always there
Every time I cry your name at night
You pull close and say it's alright
I look in your eyes, just like the rain
Washing me, rain wash over me
Touching your face, I feel the heat of your heartbeat
Echo in my head like a scream
What you do to me!

Whenever I'm alone I'm thinking
There's a part missing from my life
Wonder where I'd be without your love
Holding me together now I'm
Watching the time tick, tick away
Face grows longer every day
Fortunes are lost on the women I've seen
But without you I can't breathe
You're the air to me!

Jet City woman
Got to find my way home to her
Jet City Woman
I see her face everywhere I look!
Jet City Woman
Just a thousand miles and I'll be there
Jet City Woman, to make the clouds go away
Time for some blue sky!

Waited so long now the plane's delayed
An hour, reminds me of all our days apart
Hold on, just a little longer

This is part of the Songs I Like series.
Posted by Christopher R Taylor at 6:57 AM