"There is no new thing under the sun. Is there any thing whereof it may be said, See, this is new? it hath been already of old time, which was before us"
Ecclesiastes 1:9 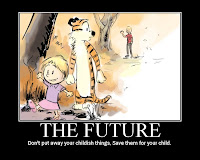 A few days ago I mentioned that the term "busting caps" has a much older origin than modern gang bangers are aware of. Cowboys used the term to refer to shooting (percussion caps were used on old guns) and young people picked it up a few years back, possibly from an old movie or book and rappers popularized it.

At Ace of Spades Maetenloch does a kind of WATN thing every night on their "overnight open thread" which is basically a place for insomniac morons to comment on whatever they think of, often based on a few of the things posted there. Among the topics last night was a link to a site which noted a few of these old terms that are thought to be new:

"Fly" mentioned above is one of my favorites (though it's considered dated by youngsters today -- they'll basically only use it ironically), but one not mentioned so is "crib" (also a bit dated) which has meant something like "house" or "home" since 1600. OED: "A small habitation, cabin, hovel; a narrow room; fig. a confined space. In N.Z. now esp. a small house at the seaside or at a holiday resort."

That comes from a discussion board at Ask MetaFilter, which has some other gems:

In the 1500s, trick was used to mean dressed or adorned. Out, in this sense, means (or was used to mean, anyhow) to the fullest extent. So tricked out, in the parlance of the sixteenth century, would basically mean fancied up as much as possible--as you pointed out, pretty much the same thing it means today.

Going (at least) all the way back to a 1677 play The Rover by Aphra Behn: "We'll both lie with her, and then let me alone to bang her."

According to Aileen Ward's biography of John Keats (English poet (1795-1821), who took an interest in English slang of the day, "hanging out" connoted "stopping at a tavern," i.e. spending time drinking, which fully comports with the modern sense of the slang expression. This indicates that the phrase was current in London in 1816 at the latest!

from Montaigne's Essays (1580): women "sometimes go to it with only one buttock," presumably meaning half-assed.

I was surprised to see "drop a line" used by Thomas Jefferson. I had associated the expression with the phone but it actually makes more sense as a reference to writing.

Other terms include "fungible" (from 1600s), "at the grind" (Mark Twain), and many phrases that Shakespeare either invented or popularized. There's a whole internet industry of trying to spot anachronisms in Mad Men but it turns out that most of them actually aren't, such as "call back," "impactful," "on the phone," and "photo shoot."

Ultimately, much of popular culture is simply recycling older things in a new context. There have always been "retro" crazes, particularly starting in the 1970s with the 50's. With the internet this has become even more pronounced and deliberate, but a lot of it still is unrecognized and unknown by a lot of the young people. I loved Miami Vice back in 1984, but my dad pointed out that show had already been done with 77 Sunset Strip down to the sunglasses.

Often, young people think they are the first ever to come up with an idea and are often stunned to find that people were doing it centuries before them. Yes, that sexual position is ancient. Yes, people did that too. Even back then. The preacher in Ecclesiastes, whoever he was, was right. There really isn't anything completely new under the sun. Its just repackaged.
Posted by Christopher R Taylor at 10:46 AM