"Guilty as hell, free as a bird. What a country!" 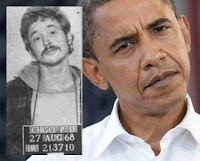 There was a stupid lie that went around in 2008 about President Obama which would have driven me nuts had I not spent years earlier arguing with leftists who just kept repeating lies about Iraq in the face of mountains of evidence as if I'd said nothing at all. I was used to it by then: some people cling to an idea because they want it to be true.

That lie was that President Obama and unrepentant terrorist Bill Ayers were barely aware of each other, almost total strangers. It didn't matter what you said, how you pointed out their relationship, and what evidence you produced, it was just brushed aside as irrelevant. Why? Because they needed it to be irrelevant, because they feared the ties would hurt their political messiah.

To this day, they cling to the myth, as more and more evidence of their relationship piles up. The mock the very mention of Ayers as a "right wing bogeyman" and giggle at the silly conservatives like they did (and do) about genuine concern over communism. How absurd!

Allow me to review.
But they barely knew each other, Obama was only nine when the Weatherman were active! How silly of the right wing to bring this up!
According to the Obama team:

Mr. LaBolt said the men first met in 1995 through the education project, the Chicago Annenberg Challenge, and have encountered each other occasionally in public life or in the neighborhood. He said they have not spoken by phone or exchanged e-mail messages since Mr. Obama began serving in the United States Senate in January 2005 and last met more than a year ago when they bumped into each other on the street in Hyde Park.

Well, I guess technically a barbecue together isn't email or phone conversation. They just talked in person, much less intimate and significant a relationship. And, of course, the statement they met in '95 on an "education project" is false, as well.

Ayers has never said he is sorry for or regrets the evil he did with the Weather Underground, and admitted he was guilty of what he was charged as doing. Why should he? He's lauded and praised by the left, given prestigious jobs, runs commissions, and is a professor at the University of Chicago. Why would he have regrets?

The fact is, Ayers and Obama are inextricably tied and clearly don't just know each other but work together. The fact is, this radical extremist terrorist is one of Obama's associates, along with many others. As one pundit put it, this isn't guilt by association, its guilt of association.

The left denies this because they know it hurts him with the American people, although deep down they don't see a problem with the association. And by now it doesn't really matter. People will judge President Obama on his job performance and the nation's status, not his associations.

I just get annoyed when people stare you in the face and lie, even after being informed of the facts.
Posted by Christopher R Taylor at 7:19 AM

Just to play devil's advocate because I really don't know what to believe when it comes to Obama and Ayers:

1) It could be true that they first met in 1995 because a) Obama's 'Developing Communities' project and Ayer's ABC Coalition easily could have worked togehter without the two ever having met and b) Sidley Austin employees over 3500 people, so just because the Obamas and Ayer's wife all worked there doesn't mean Obama met her husband.

2) Serving on panels and boards together and attending neighborhood parties is not a sign of them having anything more than a casual relationship, which Obama admits to having. Clearly they were both trying to exert leadership in the same community (for good or ill), and as such their paths were bound to cross. I serve on a municipal board and Chamber of Commerce board in my community and I'd rather have a sharp stick poked in my eye than to deal with many of my fellow board members outside of board meetings.

3) The most (and really the only) truly damning piece of evidence is the "meet the candidate" party Ayers threw for Obama.

I admit the media would have a field day if the roles were reversed, and I admit they did a poor job covering this story, but I'm not sure I believe there is solid evidence for their relationship being much more than a casual one between two people who orbited eachother in the same community, which is pretty much how Obama has desribed it. I would feel different about it if they had founded a coalition together, or had a history of going to dinner together and having deep discussions about policy, or their family's vacationed together... and I wouldn't terribly surprised to find out any of that is true, but I just don't see the evidence for it.

And as you mention, there are so many bigger reasons to oppose Obama being POTUS... this one always just comes off a bit too conspiratorial and thin for me.