"If I could I surely would. Stand on the rock where Moses stood." 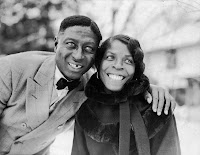 Before Louis Armstrong, before Robert Johnson, before Hank Williams (sr), before almost everything in modern music, there was Lead Belly. You've heard and know a lot of his songs, even if you aren't aware of it. You probably know several of them by heart, or at least well enough to sing along with them on the radio. He's one of the most prolific, successful, and astounding songwriters in human history, and while he is venerated and well known in the music community, most folks have barely heard of him.

Born Huddie William Ledbetter in 1888, Lead Belly went on to be a fairly successful musician until his death in 1949. He was proficient with guitar, harmonica, accordion, piano, mandolin, and violin, although usually he'd sing with a guitar and stomp a foot.

You know all these songs, but most of them by other titles. For example, "Gallis Pole" you probably know better as "Gallows Pole" by Led Zeppelin. "Where Did You Sleep Last Night" is also known as "In The Pines" or "Black Girl." "Linin Track" you probably know by the title "Hangman Jury." "New Orleans" you know as "House of the Rising Sun." Just try the links above to the songs for where others have popularized his old songs. What's interesting is that most of these old performances had a different delivery and even tune than what we know now, but you can always recognize the song.

Black Betty, for example, is best known for the version by Ram Jam, but while their version is more spectacular from a musical perspective, the Lead Belly version has more complexity and length to the lyrics. Still, that breakdown with the guitar and drums in the Ram Jam version is epic.

Nirvana in particular liked Lead Belly, covering a half dozen or more of his songs, especially on the "unplugged" album which I recommend highly. Kurt Cobain was a messed up guy ruined on drugs and married to a monster, but he was a genuinely brilliant musician and musical historian. George Harrison claimed that if Lead Belly hadn't been, neither would the Beatles. Lead Belly's guitar is in the Rock 'n' Roll Hall of Fame for a reason.

Lead Belly's life was interesting, to say the least. He murdered a man and spent years in prison, escaped from prison at one point, went back to prison for stabbing a man, recorded children's albums, and finally died of Lou Gehrig's disease. He was never a huge hit but his impact on music, especially the late 20th century blues revival in rock, was immense. Songs like "Fannin Street" are more obscure, for example, but modern blues musicians know them very well.

Lead Belly: the greatest musician you barely know.
Posted by Christopher R Taylor at 9:40 AM

It seems like I remember reading somewhere that Nirvana's version of "In The Pines" on MTV Unplugged was the last song they ever played together as a full band before Cobain killed himself. I always thought that version was particularly haunting because at the very end Cobain's face did this weird change where for a brief second he looked like a drowning man coming up for a last gasp of air... which is pretty much what he was doing, I guess.

Anyway, in my early days of learning to play guitar, I figured out that "House of The Rising Sun" (one of the first songs I learned how to play) used the exact same chord sequence as Nirvana's version of In The Pines.
That was a big eye opener for me... that multiple songs used the same structures. And in the early 90's the ability to play a Nirvana song went a lot farther with the ladies than did an old song by the Animals!