ITS HARD OUT THERE FOR A PUNK 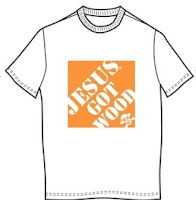 Punk bands have to be having a rough time these days. Punk's entire force was mocking the establishment, tearing down barriers, saying things like "one down, three to go" when John Lennon was shot, and so on. They were the voice of rebellion, mockery, and anger. And these days, what can you say or do that isn't almost mainstream? What can you satirize these days that isn't actually being done in earnest? Sure, you can get mad, but what's the point?

Yeah you could mock political correctness, but its sort of self-mocking already. And screaming about how you should obey the law and go to church would be transgressive and shocking to modern ears, but it doesn't really work in a punk setting. Its hard these days to be a punk when your mom has tattoos and a pierced nipple.

Still, punks try. "Jesus Got Wood" is one attempt, something to shock the squares. Except I'm about as socially conservative and "square" as you get, and that song title makes me shrug. Yeah, Jesus was a human man, he was both human and divine. He got morning wood. He had to take a dump once in a while. He was just like you and me - but without sin. The most shocking thing about meeting Jesus Christ in his earthly ministry would be how... ordinary he was. It isn't shocking to say "Jesus Got Wood."

And the song isn't shocking anyway, although it tries to be. "Jesus Got Wood" is by Punk Rock Salvation and its actually a Christian song, just delivered in punk style:
You like to get hammered
You like to get nailed
But the dude on cross is the boss
Baby you're gonna get impaled
Cuz Jesus got wood
Like you knew he would

He'll do a custom renovation
A real soul kitchen job
No need for consultation
Dude, he's the son of God!
So f**k the Home Depot
And f**k Rona too
Jesus Christ builds with pride
His cribs got many rooms get inside
Cuz Jesus got wood
Like the messiah should
Jesus "got wood" as in he was hammered to a cross by Roman soldiers. The song isn't about erections at all, except in the construction sense. Sorry, no Youtube video, this one is pretty obscure. Like most attempts to fit Christianity into pop culture, it comes across as cheesy and awkward, but at least its earnest.

I may be an unusual Christian, or maybe I'm just a product of my culture and I shrug at this kind of thing. Some might call it blasphemous but it isn't really. It is irreverent, to be certain, but that doesn't make it wrong.
Posted by Christopher R Taylor at 7:53 AM

A typically hypocritical liberal member of this cheesy bunch is a vocal supporter of governmental censorship by way of "human rights" tribunals. The conservative-led Canadian government is finally putting paid to a vile amendment to the HR Charter that violates its citizens' free-speech, and the twerp thinks it's bad, Bad, BAD: http://www.torontosun.com/2012/06/08/haters-will-love-changes-to-human-rights-act
The commenters point out his phoney, posturing outrage.

There was a song that came out a couple of years ago by Texas Country artist Hayes Carll called She Left Me For Jesus. I have an ongoing debate with some (Christian) friends about whether this song is offensive or not. They say it is making fun of Jesus. I say it is making fun the small town redneck who thinks Jesus is the hispanic dude his girlfriend has taken up with. One of my friends responded that the offensive part was that a redneck male in a small town wouldn't know who Jesus is... and I suppose I do see his point but i still thought it was a funny song that people get angry about for the wrong reasons...

we've been dating since high school,
we never once left this town
we use to go out on the weekends,
and we'd drink til we drowned

but now she's acting funny
and i dont understand
i think that she's found her,
some other man

she left me for jesus
and that just aint fair
she says that he's perfect
how could i compare?
she says i should find him
and ill know peace at last
but if i ever find jesus,
i'm kickin' his ass


she showed me a picture,
all i could do was stare,
at that freak in his sandals,
with his long pretty hair
they must think that im stupid
or i dont have a clue
ill bet he's a commie
or ever worse yet a jew

Irreverence is wrong, though.