"The proper office of a representative assembly is to watch and control the government."
-John Stewart Mill 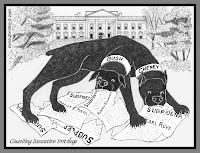 One of the three ethical systems I have identified in life is Ethical Pragmatism, which I defined this way:

Decisions are made by how well they succeeded in achieving one's goals. For the Ethical Pragmatist, right and wrong are decided by the end result: did it work? Then it must have been the right thing to do. The steps taken along the path toward the fulfillment of the goal are sanctified by the end results, this is where the "end justifies the means" ideal is found. No matter how repugnant or distasteful your actions were, if they succeeded in accomplishing what you set out to do, then they are acceptable, even right.

This is the realm of situational ethics, where you determine right and wrong by its end results rather than the act its self. This is also known as a lack of integrity, in which you pick the path to follow and judge your actions by how effectively you achieve your goals rather than what you are doing.

And one good example of that in action is the concept of Executive Privilege by the president. Two presidents in a row have invoked this principle to avoid being accountable to congress, both President Bush and President Obama. In short, it is the declaration that the executive office is equal to and not subordinate to congress and does not have to answer for what it does while properly carrying out that branch's duties. Congress cannot hold the president or his workers accountable for doing their jobs.

When President Bush did this, Barack Obama condemned it as lawless and tyrannical. But the supporters of President Bush defended his invocation of this principle while attacking President Obama for doing so. And vice versa. Why? Because of Ethical Pragmatism and Playing for the Team: my guy is being helped/harmed, and that determines my response.

So you end up with one side attacking the other for exactly what they condemned in the past, or defended, depending on who was president at the time. Politics seems to bring this out in people.

However, I would argue that there's a substantive difference between President Bush's invocation of this principle and President Obama's.

The argument, supported by the Supreme Court explicitly in 1924, was that Congress could not reasonably or responsibly exercise these powers without knowing what the executive was doing; how programs were being administered, by whom, and at what cost; and whether officials were obeying the law and complying with legislative intent.

The federalist and anti-federalist papers written by the founding fathers who crafted and passed the US Constitution simply took this power for granted, as it was typical of a representative legislative body. There was virtually no discussion on this topic in these writings, because it was considered so obvious and generally understood. It probably would have been wiser to state this more clearly in the constitution, however.

At the same time, the executive branch as independent power as to how they carry out the laws that congress gives them, and each branch of government is completely equal in power. They can, at any point, refuse to do what one of the other branches orders them to, should they believe this is unconstitutional and illegal. For example, if congress passed a law requiring all blonde children to be executed, the president could simply refuse to carry out this law. He could be impeached by congress, but could not be compelled to enforce it.

In other words, there's an innate conflict here: congress has a reasonable interest in making sure laws are properly carried out, and the president has an interest in enforcing laws independently. And while congress has a duty to oversee what happens in government (including the Supreme Court, as Newt Gingrich stated, to some controversy), they cannot tell the executive branch how to carry out their duties.

So when President Bush fights a war or carries out intelligence operations - exclusively the executive branch's authority - congress has no power to compel him or tell him what to do. They simply have no authority there. So in this situation, the president can reasonably say "no, I'm sorry, that's none of your business."
President Obama, on the other hand, has invoked this principle to simply refuse to cooperate with an investigation into the Fast & Furious program created at his command in the Justice Department. This program, as I'm sure most of you know, was a scheme by which weapons were deliberately moved to murderous drug gangs in Mexico across the American border, and then forgotten about. The previous Gunrunner operation was tracking guns that were sold and nailing the people who sold them, catching the people who got them, and trying to stop the illegal trade. Operation Gunwalker/Fast & Furious was a followup and no tracking has taken place at all. It has resulted in hundreds of deaths by these firearms, including American citizens and at least two law enforcement officers.

Fast & Furious was neither reasonable nor proper activity by the president; not a constitutional activity by the executive department. It was a plan with two goals in mind:
So congress has responded by looking into this, trying to find out how it is that the US Justice Department deliberately got automatic weapons into the hands of drug cartels and resulted in these deaths. Which is not an unreasonable question.

The tricky thing about congressional oversight is to keep it focused on legal proprieties and proper government rather than a political tool. I would argue, with good reason, that the Democrats in congress were using oversight to attack President Bush and undermine his efforts to carry out his duties because they simply didn't like what he was doing. However, nobody ever does anything for only one reason, and at least some believed they had good constitutional reasons such as search and seizure laws when it came to wiretapping foreign calls between American citizens and suspected terrorists.

And while there's a political aspect to everything in Washington DC, but the core of congress investigating Fast & Furious is driven by concern over a terrible idea that went all too predictably wrong.

And that's the distinction here. I supported President Bush's refusal to send people to endless congressional hearings because their purpose was not to determine the rule of law but to attack the president and undermine his efforts to fight terrorism. I condemn President Obama's use of this principle because he's not protecting anything but his political future and his friend Eric Holder.

Because there's no good reason to refuse to assist congress here. No intelligence operation will be spoiled, no secrets that help our enemies will be revealed, no war effort will be damaged, no fight against terrorism or evil will be in any way affected. Eric Holder has simply lied, blatantly, to congress repeatedly about this operation, withheld data for months at a time (which is why the vote to hold him in contempt is being held), and the Justice Department has been pressuring agents and even punishing them for speaking out.

There's no clear or proper legal principle for this refusal to cooperate. Its simply covering one's political behind when an operation that was supposed to work behind the scenes to bring about a policy goal ended up exploding in their face. President Obama isn't protecting the constitution, his office, or anyone else but his and a friend's job and reputation. This is about saving face, not any lofty constitutional principle.

Ultimately, what Obama is doing here is covering up rather than protecting the constitutional office of the presidency. He's using this to refuse to admit to wrongdoing or even allow an investigation. And that's pretty distinct from what President Bush was doing.

*UPDATE: Todd Gazanio at the Heritage Foundation points this out:

Congress is powerless to force the president to do anything, of course. But this battle might force legacy news organizations to pay attention to and have to explain what this is all about.
Posted by Christopher R Taylor at 7:38 AM

I don't believe any of the weapons involved were "automatic" - they were mostly semi-automatic Ak-47 style rifles commonly available for civilian purchase.

In gun parlance, "automatic" (sometimes, "fully automatic) implies that the weapon fires continuously after pulling the trigger. Military AK's can do that; not the civilian AK or M16 style rifles.

It can be confusing; people routinely refer to "automatic" pistols, but what they mean is semi-auto. A fully automatic handgun would just be a good way to waste ammunition without hitting your target.

You can't buy, sell or own full-auto weapons without a boatload of credentials on the part of the buyer and seller and formally advising the Gov't that the transfer has taken place, who the purchaser is etc. Plus, they're wildly expensive because the supply has been frozen for forty or so years. No new full-auto weapons can enter the market.

Also, I'm not sure, as of yet, we can safely conclude that the point of this operation was to manipulate the domestic gun control debate. I don't think we've quite got the evidence for that as a motive.

It's true that this operation, absent a rational explanation by the Gov't, appears to be crazy. Since the DOF/ATF won't fully explain it, the Gov't is inviting people to conclude it was conducted for bad reasons; so the Democrat rhetoric about American guns getting used in Mexico, and things like Obama's comment to Brady (reported in the Washington Post, I believe), naturally lead to such a theory to make sense of what it was all about.

But - it's all crazy. Anybody who thought that program was a great way to goose the gun control debate is crazy, or maybe crafty, but at least a sociopath.

The gun control theory is just trying to make sense of crazy without better information available.

That said, I'm prepared to discover that it was all carried out for any number of fundamentally insane reasons.

Heck I'll be relieved if it turns out be mere rational, self-interested but criminal venality. The notion that anybody allowed into government, whether Republican or Democrat, would sign off on that program to manipulate a domestic political debate goes beyond frightening.

Well I was trying to use the terms and categories the gun control crowd does to shape their statements. Without getting too technical, some of them were probably automatic as well as semi automatic - some pistols and such were likely involved - but the bulk seem to have been submachine guns and riles. The pictures of guns mounded up from a raid always seem to be a fair mix of different ordnance.