"The problem now is there’s no demand there" 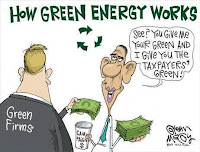 Syracuse, New York used $700,000 of federal "stimulus" funds to set up 68 new electric car charging units around the city last year. Now they're tearing the units out. They aren't going to be removed, this is a repair effort because the devices were set up with the wrong type of charging units.

Why did it take months to get this change done? Well perhaps one reason is because in the five county area around Syracuse, there are only 30 electric cars.

As of early May, Onondaga County had six Nissan Leafs and one Mitsubishi MiEV – cars that run solely on electric power – registered with the state Department of Motor Vehicles. Additionally, there are 22 electric hybrid vehicles — 21 Chevy Volts and one Toyota Prius — registered within a five-county area throughout Central New York, according to the DMV. The 30th vehicle is a government-issued Ford.

Statewide, there are 962 electric or electric hybrid cars.

I doubt they even got tried by very many people. Still, the state of New York, like many others, is insistent on building up an infrastructure for electric cars. Governor Cuomo announced a plan to spend $4,400,000 on more than 300 charging units across the state, claiming it will create jobs, reduce emissions, and lower fossil fuel consumption.

See, the theory by many is that eeevil petrochemical organizations are crushing the electric car, which would flourish and prosper if only given a chance and supported enough by the government. People love these cars, they just aren't being given an opportunity! The problem is, when gas powered cars started showing up, people loved them and bought them, and private entrepreneurs set up gas stations and repair shops to make money off the demand. Roads were already in place, and the infrastructure to support gas powered vehicles grew organically around the demand and the new technology.

Nobody had to take taxpayer money and set up the entire network of businesses and services to maintain gas powered cars, it came about naturally and due to individual ambition. Because people wanted gas-powered cars. Its not like the electric car is new, they've been around a hundred years or more. They just weren't liked by people. The failure of the electric car to catch on isn't some dark conspiracy by oil companies and government, they just aren't what people want.

If this was a viable industry it wouldn't need the government to survive Take away all the subsidies and government programs and charger networks and so on that is paid for by tax dollars and the entire electric car industry collapses. Which sort of makes this a scam. Its not business, its not an economic sector, it isn't the future of technology, its taxpayers being forced to set up and support a bunch of donors to one political party.

Like I've said many times before, I like the idea of the electric car, but we aren't there yet, and this is just a colossal waste of money and stinks of corruption and favor dealing. Until electric cars have longer, more reliable range, cost less, have more power, and can be charged faster and easier - with batteries that won't be the bulk of the cost of your car to replace - these things are not going to take off. All the chargers and business loan guarantees in the world will not change that.
Posted by Christopher R Taylor at 9:07 AM

I live @ 50 miles to the east of ‘Cuse in Rochester where we are about to do the same thing.

BTW, my prediction Cuomo will make a run for president in either 4 or 8 yrs. And he will do well. Mark it down.