“Roosevelt was a very shrewd and conniving politician. He did what was politically useful for him.”

Franklin Delano Roosevelt is revered by Jews and is one of the main reasons that Jews in America vote almost exclusively Democrat regardless of the candidate or what they actually do in office. FDR is considered the man who saved the Jews in Europe and is venerated almost to the point of sainthood by some Jews.

And there is good reason to respect and honor the man, despite his flaws. He was a powerful, focused leader in a time when we desperately needed one, a man nearly as great as Churchill was in England. He had his flaws, particularly in his politics, but he was a very great man and president despite them.

However, there is an episode in FDR's past which is pretty awful, and it revolves around a ship called the St Louis. Many people have not heard of this ship or the attending story, and its worth knowing if you want to know more about the man, particularly if you're Jewish.

See, FDR wasn't opposed to the Nazis because of a principled defense of Jews. He was opposed to Nazis because he saw them as a great evil and an opponent of his ideology. It wasn't about liberty, so much, because he didn't see Communism as a particularly great danger - in some ways he appeared quite sympathetic to Communist ideals. He saw Nazis as a global threat because of their desire to dominate the world. The death camps were largely unknown and presumed to be exaggerations of the usual misery of prison camps until they were really discovered.

Make no mistake people wrote about what was going on in Germany, but they were largely ignored. American newspapers weren't interested in the story in part because they feared America would be dragged into war scant decades after the previous one which was a horrific meat grinder. And the stories seemed so excessive and implausible people were skeptical. Germans weren't evil, just imperialistic and proud. They wouldn't drag Jews out of shops and homes and put them into a walled area, then round them up for camps for extermination, it was believed.

So when the stories trickled out in letters and by a few brave journalists, it wasn't reported on very much. To this day there are people who think it was all fiction, a position that's only going to grow as that generation dies off.

And one of those groups of people who fled Germany with stories were on board the MS St Louis in 1939. The St Louis was a German steamer captained by Gustav Schröder, who was just as German as his name sounds. He too aboard his ship almost 1000 Jews who were fleeing Europe because they knew what the Nazis were like. As the ship sailed, Captain Schröder arranged for Jewish religious services and food, and treated the Jewish passengers with the same dignity and respect as the handful of non-Jews.

The ship steamed to Cuba, where the Cuban government under Federico Laredo Brú refused the passengers entry as tourists unless they would pay a $150 landing fee, and would allow them to disembark for a $500 visa fee, which few of the passengers could afford. He would not take them as political refugees or offer them asylum. Twenty-nine passengers were able to afford the fee and disembarked.
The Cuban situation was largely driven by corruption and greed. The Jewish Virtual Library explains it this way:

In Cuba in early 1939, Decree 55 had passed which drew a distinction between refugees and tourists. The Decree stated that each refugee needed a visa and was required to pay a $500 bond to guarantee that they would not become wards of Cuba. But the Decree also said that tourists were still welcome and did not need visas. The director of immigration in Cuba, Manuel Benitez, realized that Decree 55 did not define a tourist nor a refugee. He decided that he would take advantage of this loophole and make money my selling landing permits which would allow refugees to land in Cuba by calling them tourists. He sold these permits to anyone who would pay $150. Though only allowing someone to land as a tourist, these permits looked authentic, even were individually signed by Benitez, and generally were made to look like visas. Some people bought a large group of these for $150 each and then resold them to desperate refugees for much more. Benitez himself had made a small fortune in selling these permits as well as receiving money from the cruise line. Hapag had realized the advantage of being able to offer a package deal to their passengers, a permit and passage on their ship.

The President of Cuba, Frederico Laredo Bru, and his cabinet did not like Benitez making a great deal of money - that he was unwilling to share - on the loophole in Decree 55. Also, Cuba's economy had begun to stagnate and many blamed the incoming refugees for taking jobs that otherwise would have been held by Cubans.

In the defense of the Cubans, it is not a very huge island and over 900 people would have had a pretty big effect on the economy. Granted they were Jews so they probably would have had a very positive effect in time, but immediately it would have been rough during the Great Depression.

The MS St Louis steamed north to Florida, stopping at Miami Beach. There, the Captain appealed to let the Jews onto American soil as refugees. American law would not allow Visas to be issued to anyone without a return address - which none of the Jews on the ship had. The passengers sent a telegram to the White House, hoping for the president who had a reputation as a humanitarian and a guy who fought for the common man would let them into America.

The response was a coast guard cutter, whose job was to make sure the ship did not get close to American shores. Unfortunately at the time, there were at least some in the US government who saw Jews as a threat. They feared Jewish communism would infiltrate the United States, and there were those who saw Jews as "unAmerican" and "filthy." Further, the eugenics movement, led by people like Planned Parenthood founder Margaret Sanger were influential in immigration policy, allowing only a few people from some countries into the US.

Due to the Nazis gaining power, many Germans left and headed to the United States, making the quotas from those countries fill up rapidly. By the time the St Louis showed up, there wasn't room for 900 more. In 1939, the quota for Germans was filled. Dr Rachel Medoff writes in Our Jerusalem:

Supporters of the bill included prominent church figures, leaders of the AFL and CIO labor unions, university presidents, New York City mayor Fiorello La Guardia, the 1936 Republican presidential and vice-presidential candidates, and former First Lady Grace Coolidge, who announced that she and her friends in Northampton, Massachusetts would personally care for 25 of the children.

Nativist and isolationist groups vociferously opposed the Wagner-Rogers bill. Typical of their perspective was a remark by FDR’s cousin, Laura Delano Houghteling, who was the wife of the U.S. commissioner of immigration: she warned that “20,000 charming children would all too soon grow into 20,000 ugly adults.”

FDR responded negatively to a private appeal to him by First Lady Eleanor Roosevelt for his support of the bill. He did tell Eleanor that he would not object if she endorsed it, but she refrained from doing so. When a congresswoman inquired as to the president’s position on the bill, FDR returned the note to his secretary marked “File No action FDR.”

Mindful of polls showing most Americans opposed to more immigration, Roosevelt preferred to follow public opinion rather than lead it. Without his support, the Wagner-Rogers bill was buried in committee.

Roosevelt, some report, was apathetic toward the St Louis and its passengers. It is known that the Roosevelt administration attempted to get Cuba to accept the Jews from the St Louis, but that was unsuccessful. A memoire from the time was recently uncovered, claiming that "our State Dept. was unsympathetic and Franklin Delano was apathetic, although Eleanor did everything in her power to change their attitude."

The MS St Louis was denied port and the Jews were not allowed into the land of opportunity by the Roosevelt administration. They could have been. They could have been let onto American soil as refugees, or as asylum seekers. They could have even been temporarily detained by Executive Order. Instead they were tailed by several coast guard ships ordered to "ensure the safety of the passengers" which the Captain believed meant "don't let the ship ground its self and allow the passengers to escape," which he considered. 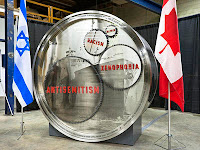 Canada's government was requested by clergy and humanitarian groups to allow the Jews to land there, but anti-Jewish cabinet members prevailed and the offer was never made by the Prime Minister.

Eventually, the St Louis steamed away, back to Europe. There, through negotiations, they were allowed to disembark 288 for the United Kingdom, 619 at Antwerp; 224 in France, 214 in Belgium, and 181 in the Netherlands. There they were safe for a matter of months before the Nazis invaded. The St Louis and its captain returned to their home port of Hamburg and continued their work.

Eventually Captain Schröder was lauded and awarded for his attempts to save these Jewish passengers, both while alive and posthumously. In 1940, the Nazis invaded Belgium and Holland and conquered them in a matter of days. In the end, the United States Holocaust Museum research found that 365 of the Jews in Europe survived, the rest killed, mostly in the concentration camps at Auschwitz and Sobibór.

All through this tragedy, Christian groups tried to get their governments to allow the Jews to land. It was church leaders, pastors who were prominent in the push to allow the St Louis to release its passengers into these countries. FDR, great hero of the Jews, refused. He was more than willing to bend the law to a pretzel when he wanted to - often to very great effect in fighting Nazis before the US was at war - but he would not do so to save these Jews.

FDR didn't hate Jews, but he didn't really care that much about them. One ship with a bunch of people on it wasn't enough to take a stand on, from his perspective. He had other things to do, like ram socialism down the throats of Americans and threaten the Supreme Court for daring to call his unconstitutional efforts actually unconstitutional. To be fair, he was fighting a nation that wanted war about as much as you want a cheese grater taken to your nipples and trying to save civilization from one of the greatest evils the world has ever seen as well.

But he had a chance to do something truly heroic, and he did the opposite.
Posted by Christopher R Taylor at 8:11 AM