“Holy undergarments, Duckman! Is that what I think it is?"
-Tony DiNozzo, NICS, "Secrets" 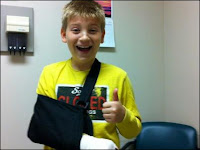 I have a superhero on my Facebook page. Sort of. He goes by the name Phoenix Jones, and he works in Seattle to help fight crime and assist people in need. He actually does fight crime, too. He wears a superhero suit and he used to volunteer with kids in need, until a court thought he was too crazy to do it and banned him from the work.

He's visible on the streets and known to the press (and after the court case he doesn't have a secret identity any more). And kids, unsurprisingly, love him. Phoenix wears body armor, because he's not dumb, and while it looks interesting, its the real thing, as young Noah found out:

They were talking all about superheroes. (Phoenix) got up in front of the kids and was telling them all about his uniform, and it's rubberized and armored and bulletproof," Denise told KOMO NewsRadio. "My child gets up in front of him and (Phoenix) says to him, 'OK, give me all you got...give me your best punch, but wait, but don't do it too hard, you might get hurt.' "

But she said there was her son in front of his classmates and a superhero has just challenged him to punch him as hard as he can, "and my kid took all his might and punched him!"

He broke a finger on Phoenix's armor. Amazingly enough, no lawsuits are planned, and the kid thinks its really cool. Noah was quoted as saying "I shouldn't punch a superhero as hard as I can."

Perhaps this wasn't the best judgment by Phoenix Jones, but he's a modern superhero so his judgment is a bit in question anyway, you can get hurt that way. And Noah? Well now he has a cool story to tell and I bet all his friends think its super cool. Plus: girls are always nice to guys in a cast. Not that he probably cares at his age.

Incidentally, Phoenix Jones was an MMA fighter in the late 80s and he carries a stun baton, pepper spray or tear gas, handcuffs and a first aid kit. The reason he wears the suit is to have a high public profile to keep crime down, to be instantly recognizable as help to people in need, and to make sure the cops know he's not a criminal.
Posted by Christopher R Taylor at 9:19 AM