"In many women thyroid dysfunction develops because of an energy blockage in the throat region, the result of a lifetime of 'swallowing' words one is aching to say. In the name of preserving harmony, or because these women have learned to live as relatively helpless members of their families or social groups, they have learned to stifle their self-expression."
-Christiane Northrup, frequent Oprah guest 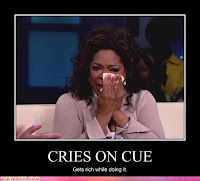 Oprah Winfrey has retired, and her influence is waning over American culture, which is a very good thing. What hasn't gone away is why she was so influential. What attracted so many women to her show and her ideas, why was she such a guru for so many people?

That power she had, and the reason behind it is troubling to me because it represents a part of American culture that is damaging to the nation, a perspective of relativism, empty spiritualism, and racial politics that sets people against each other without any real foundation. Her whole show was basically fluff, but people thought it was terribly profound. It was political correctness packaged in a soft, furry coating like a teddy bear so it wasn't as angry and aggressive as usual.

Oprah gave us the same old same old, but done with a matronly, gentle sound so the usual nonsense seemed kindly and reasonable without being delivered with reason. White privilege, male privilege, rich people taking advantage of the poor, why can't we just give people what they need, racism in the guise of fighting bigotry, and so on all were a regular part of her show, delivered with pop psychology and sophistry so it was comfortable for white middle class women.

The pain-body consists of trapped life-energy that has split off from your total energy field and has temporarily become autonomous through the unnatural process of mind identification.
-Eckhart Tolle, frequent Oprah guest

She pushed the "Vaccines are bad for kids" evil, she pushed stupid fad diets and nonsense self-help programs like "The Secret" which was just about visualizing things and they magically happen. She pushed weird, even dangerous pseudo-medical treatments to fight aging and enhance beauty, she pushed new age nonsense that sounded spiritual and important because it was usually presented by women who knew wiser things than the male doctor tyranny.

Essentially her entire show and worldview is that things which make you feel good and seem true are more important than the truth. That the empty, emotionally persuasive is superior to the factual and the rational. That what you wish to be true matters more than what really is.

And that probably is why she's been the poster child for false biographies and lying hucksters. Mark Steyn runs down the sad list of Oprah books:

Oprah was also smitten by The Education of Little Tree, the heartwarmingly honest memoir of a Cherokee childhood which turned out to be concocted by a former Klansman whose only previous notable literary work was George Wallace's "Segregation Forever" speech. Fragments: Memories of a Wartime Childhood is a heartbreakingly honest, poetically searing, searingly painful, painfully honest, etc., account of Binjamin Wilkomirski's unimaginably horrific boyhood in the Jewish ghetto of Riga and the Nazi concentration camp at Auschwitz. After his memoir won America's respected National Jewish Book Award, Mr. Wilkomirski was inevitably discovered to have been born in Switzerland and spent the war in a prosperous neighborhood of Zurich being raised by a nice middle-class couple. He certainly had a deprived childhood, at least from the point of view of a literary agent pitching a memoir to a major publisher. But the "unimaginable" horror of his book turned out to be all too easily imagined.

Its not that you can't get fooled once in a while, its that it kept on happening. But lets not pick on Oprah Winfrey too much. Certainly she's exhibit A, but she's not the only one.
Ever hear of Rigoberta Menchu? Her book I, Rigoberta Menchu was required reading in Ivy League schools, she's still brought up as a heroic example of feminist triumph. Her biography was a pack of lies. Greg Motenson's book Three Cups of Teawas revealed to be largely invention and lies, and his foundation based on its popularity was misusing funds. Well, he meant well and the deeper "truth" it contained was more important than being true true. Both were pushed by Oprah on her show.

Then we come to President Obama's memoirs, which starts out explaining how some of the events in the book are fiction, compiled from various events and people in his life to create one person out of several. That's pretty bold stuff for memoir, which is defined this way:

Nothing in that definition has the slightest thing to do with invention, combining people, or vague accounts of "constructions." Memoirs are supposed to be truthful, or why even write them? This isn't "stuff that I wish had happened" but "here's my life." As Mark Steyn points out, former Politico head Ben Smith sniffed at Buzzfeed about how people were stupid to take it so literally, foolish to have "taken the self-portrait at face value."

And given that the book is riddled with not just incidental but specific supposedly life-defining errors and outright inventions, its hard to believe anyone would even suggest this is a memoir at all. If its just fiction based on some life experiences, that's fine - but it was presented as the soul and development of a man seeking to be President of the United States. Want to know who this man is? Read his book! Except its full of lies and distortions.

I can't help but think of Elizabeth Warren and her "high cheekbones" claiming to be Cherokee to get special treatment at two different institutes of higher education. She says its true because of family tradition, and maybe that's where Obama got his stories: these are just the whoppers he was told while growing up around radical extremist lefties. But if that's true, why should we trust their judgment? Its fine to have Norm at the corner bar telling hilarious distortions and inventions as a know-it-all, but someone in high office?

This pattern of falsehood offered up as deeper truth goes back a long ways, not starting with but most perfectly exemplified by the Bush TANG story on CBS. Dan Rather was sure he had a campaign-killer, when it was an obvious lie delivered by secret political operatives in the form of a stupidly forged letter. But its still true, Rather insists, and so do a lot on the left. It contained the truth, even if the letter was forged, and they deny it was anyway.

Because ultimately it seems that for too many people, what they want to be true is more so than the real truth. When reality gets in the way of what you want, well reality has to give way.

There are signs that Oprah's reign of power is over. Her show was losing its power over American women, the scandals and lies were building up and tainting the entire empire. Her cable TV channel has such low ratings she hired on Rosie O'Donnell to generate interest and failed utterly. The magazine is plunging in circulation and sales, partly due to the show ending, and partly a pattern of continuing slump of magazine sales overall and O in specific.

But that worldview, that attitude about life isn't disappearing.
Posted by Christopher R Taylor at 9:13 AM

FWIW, The Education of Little Tree was written by Forrest Carter, who did have one other notable work besides writing racist speeches for George Wallace: he wrote "The Outlaw Josey Wales".

Both "Josey Wales" and "Little Tree" are highly entertaining works of fiction, and not much else.

But yeah, I won't miss Oprah when she finally makes an exit from popular culture.

Outlaw Josey Wales was a great flick too!