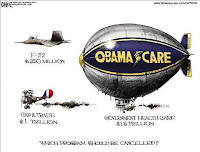 I haven't read the decision yet, but it appears that the Supreme Court of the United States has upheld the Government Health Insurance Takeover Act as constitutional, at least in part. Like most complicated legal issues, this is probably a very complicated decision that isn't as obvious as its being made out to be, so I'm not going to comment much on this except to consider why they might have come to such a patently false conclusion.

Timothy P. Carney at the Washington Examiner sheds some light on the way decisions of this sort come about:


Nobody looking at the plain language of the Constitution would say, "Ah, this obviously empowers Congress to force everyone in America to buy health insurance on the state-by-state individual market."

But a permission structure has been built in the form of legal precedent -- including many bad decisions by liberal judges -- slowly making it possible for Washington to do what sounds absurd on its face: forcing us into intrastate commerce in the name of regulating interstate commerce.

Its how the Supreme Court could have decided that a bill largely silencing political speech right before an election is somehow not a violation of the first amendment (McCain-Feingold campaign finance reform). Its how a lot of bad judicial calls are made: precedent and legal decisions one by one moving steadily away from logic and common sense toward a direction that lawyers prefer.

See, the problem is that if the Supreme Court just wholesale threw out the entire bill as being obviously not permitted under the very limited powers of the US Constitution, it would have massive, wide-ranging repercussions for many, many other pieces of legislation in the past. This bill is based on an interpretation of the "commerce clause" which has been used to let the US congress do many things the founding fathers plainly did not want the federal government to do.

Ace at his HQ puts it this way:

Now, if this is not a partnership at all -- if the government can simply dictate to the states what they shall or shall not due, with the threat of withholding large amounts of federal money (collected from state citizens -- doesn't this expose the "partnership" for what it is, an end-run, a dodge, a pretext to hide an unconstitutional exertion of federal power?

Shouldn't that fail, too?

Now, from initial reports, supposedly the decision deliberately tries to avoid this entire debate, which isn't surprising. Supreme Courts are very, very careful to never, ever step on the toes of a previous court. If there's one thing every court agrees on, its how very important and sacred courts are, and they just do not like to bring into doubt the decisions and statements of their peers. To my knowledge, the Supreme Court has never, ever overturned a previous decision of its self, even though it is the only court in the land that can do so. And its made some horrendously bad decisions in the past.

Stating that the US congress has grossly overstepped its constitutional limits by declaring its self able to mandate commerce in any way whatsoever, claiming it is for the good of the public, opens up the court to thousands of challenges, based on that decision, against things like medicare, social security, farm subsidies and a host of other common spending items on every budget since the early 1900s.

And the Supreme Court just doesn't want to open that can of worms. They probably just could not find any way to throw this out without also cracking that can open, and so they tried to find a way to explain how this one somehow still was okay, regardless of the plain meaning of the founding fathers in the US Constitution.

And that, my friends, is why you cannot rely on the courts to do the right thing here. We cannot trust the courts to be the backstop to prevent abuse by congress, because their understanding of jurisprudence or restraint will lead them to not stop certain things even though they plainly should be.

So while we don't know exactly what this ruling entails, it appears to be keeping the legislation intact and not throwing a single piece of it out, based on murky legal precedent and careful definition of terms.

And that means this bill stays law and crushes the US economy, handing a fifth of it to the federal government. No way will a further congress overturn this because it hands so much money and power to government and neither party wants to give that power up. Not only that, but the primary concern of nearly every congressman - if not all - is being reelected. They will not vote against this for fear of being portrayed as hating the poor, hating elderly, hating minorities, wanting people to die, and so on.

So it stays, and all those businesses holding their breath hoping they won't have to destroy their profits paying for the massive increases in insurance costs now know they will.

*UPDATE: Incidentally, it appears the court decided this law was perfectly fine because it is a "tax." What's interesting is that the Obama administration and Democrats in congress kept swearing up and down it was not a tax, largely to avoid being a vast tax increase and making them look horrible to the public. Well, more horrible. Now it is a tax?

And consider this: the Court has ruled that you can tax inactivity - failure to buy insurance. That means that the government, through penalty, can dictate both action and inaction. That means they have total control of you no matter what you do, through legal sanction. That's just a guess, based on what we now know but if true its a pretty chilling, evil thing to have happen to the US. We had a nice run, for about 200 years.

**UPDATE: A great summary of the basic flaws with this decision regarding taxation and the constitution from Ace of Spades HQ by commenter "Stuck on Stupid":


According to Chief Justice Roberts laughable decision, Obamacare is Constitutional because it's a tax. But even so anyone with half a brain can see through this ruse easily.

First, if it was a tax then the court had no jurisdiction to rule on it and none of the people bringing the case before the court would have standing to do so thanks to the Anti Injunction Act. You can't oppose a tax until it's actually opposed on someone. Since the "tax" doesn't go into effect until 2015, by law the Court would have had to set it aside until then.

It gets worse, of course. The 16th Amendment gives Congress the power to levy a tax "on income". Obviously this is not a tax on income.

So even if you accept Robert's completely ridiculous assertion that this is a tax, Congress doesn't have the power to levy it. It's still unconstitutional.

Its just a mess any way you look at it. Roberts, in an attempt to avoid throwing out a law in a demented sense of judicial restraint, was being too clever and screwed it all up. It was simply shameful.
Posted by Christopher R Taylor at 8:08 AM