"He didn't even have the satisfaction of being killed for civil rights. it had to be some silly little Communist."
Jackie Kennedy

Vietnam. The war that tore America apart, the war that started the modern leftist movement and gave it political power. Vietnam, America's darkest hour, where the country was torn to pieces at home and failed abroad.

The war in Vietnam is filled with sadness and regret, an effort that started out bright and patriotic and ended in misery and drug-hazed failure. It took a decade for America to get over the shock and demoralizing power of this war.

And we've always been told it was total failure. That the United States lost, that the effort was a mistake and a quagmire from start to finish. That it was a complete and utter collapse of policy and a waste of young lives.

We've been raised with the idea that the Tet Offensive cut Vietnam in half and spelled the end for America, the first defeat in American history on foreign soil. The American military, defeated by a low tech war of attrition by wiry little Vietnamese warriors, too tough for us to handle.

I know that sounds crazy, since we all know that America pulled out of Vietnam, that South Vietnam soon after collapsed and the communist regime of the north took over. I know that America counts this war as a loss. But we did really win.
To understand this, you have to know why we went there to begin with, and that takes a bit of history. Just after WW2, the world faced a new, growing threat. Nazis and Germany had been finally defeated but in the process, the Soviet Union had taken over most of Eastern Europe and instead of moving out, decided they'd keep it. Oh sure, technically they let Poland and Hungary and so on have their own countries back, but they were vassal states to the Soviet Union. Controlled and puppetted by the Russians, they were under the control of communism.

And when China fell, it became obvious that communists were just as interested in expansion and domination as the Nazis had been, just with different tools. Instead of direct invasion (in most cases) they used proxies; local revolutions financed, trained, and equipped by the main state of China and Vietnam.

This spread of communism is mocked a lot these days, it became popular in the 70s to giggle at anti-communists and folks like Ronald Reagan who warned about its expansionism. The same sorts of folks did that about Nazis, too, until Russia got attacked, at least. And it became culturally set that worrying about communism was silly and an empty fear. Those commies are under the bed! Those commies are everywhere!

Hello I am just listening to this record with my wife and our au-pair and I’d like to say how shocked we are that a pleasant collection of Norwegian folk songs should be turned into an excuse for communist propaganda of the shoddiest kind. What’s gone wrong with the world. I can’t even take a bath without 6 or 7 communists jumping in with me. They’re in my shirt cupboard and Breshnev and Kosegan are in the kitchen now eating my wife’s jam. Oh they are cutting off my legs. I can see them peeping out of my wife’s blouse. Why doesn’t Mr Maulding do something about it before it is to late. Ohhhh….God…
-Monty Python's Another Record, Gumby Theater sketch

Except... they were everywhere. And they were trying to infiltrate governments, manipulate popular media and education, and control unions, schools, and more. We know this for a fact because when the Soviet Union collapsed, the KGB opened their files and lo and behold that's exactly what they were doing for exactly the reasons people said.

Anti communism went to silly extremes just like any movement, but it was based on genuine concern. And that's what brings us to the "domino theory." This was the theory that communism had a multi-stage long term goal in mind, to take out small countries, then spread from them one by one, taking each country over and gaining momentum through revolution, local popular support, and the morale of success in previous countries.

This was not groundless. There was a specific deliberate effort to do just that in Southeast Asia, Africa, and Central America. Communists saw this as salvation for oppressed peoples under brutal dictators - and they certainly were in that state. The fact that communism simply replaced them with leftist dictators didn't matter, at least they were our tyrants then... or so the communist figured.

This was a very real effort by the Soviets and Chinese. The first such was Korea, which is little more than a peninsula off the Chinese mainland. As is Vietnam, for that matter. And the communists were more than willing to use local forces with Russian and Chinese advisers and weaponry, teaching them how to fight. There's a reason the AK-47 is the most widespread and popular assault rifle on earth, and its not just because its so rugged.

Incidentally, most of the Muslim terrorism we face today came from this same sort of effort: the Middle East was used by the Soviets to stir up animosity against the west based on Islamic principles, and it has been horribly effective. Of course, it has turned against them pretty badly, as Russia has to deal with terrorism now, too.

So when it came to Vietnam, the US faced a dilemma. Would they let this nation fall to communism, which would trigger the next nation, and the next, and the next, or would we fight? The French were pulling out; their public simply wouldn't support it any longer. And the US made a decision, across all party lines (except the CPUSA): this has to be stopped, here; we cannot allow this to work anywhere or it will be tried everywhere and we cannot fight everywhere at once.

Its not that there were no good fighters in South Vietnam, some of those ARVN forces were just as tough and driven as the Viet Cong; more so, since they knew what their fate would be if they lost. But there were a lot of folks in South Vietnam who thought maybe communism wouldn't be so bad after all. And since the South Vietnamese government was a batch of corrupt scumbags, they weren't totally off base.

And that's where people get confused. This wasn't about saving the government of South Vietnam. It wasn't about winning Vietnam. It wasn't about taking the north back and uniting the country. It was about drawing a line. It was about saying "we will allow you to go no further." Whether these countries were run well or not, whether they were free or not was irrelevant. This was about global politics not about the local fights. Yes, South Vietnam was run by scum, yes, they needed a change. But communism wasn't the change they needed and they ended up being pawns in a much bigger fight.

And that's where the win happened. This wasn't a tactical win, it was a strategic win. We lost that battle but ultimately, the war to stop communist expansion was won, and Vietnam was the primary battle. Sometimes you can lose a fight but walk away the victor because it cost your opponent so much. Here are some statistics:
The Russian government spent hundreds of millions of dollars for over a decade on men, materials, training, and propaganda, and they had far less to spend than the United States. They lost mountains of supplies, and they saw their equipment churned to pieces by the US war machine. They watched as every up front, face to face fight ended with their tactics and equipment got obliterated by American forces. They lost, and lost big.

Yes, they managed to get communism to take over Vietnam, and for a while Cambodia, but ultimately it was a fail because the United States demonstrated that it was willing to spend more blood, more money, more time, and more fury to stop communism from spreading like this than the Soviets were willing to get it to spread. 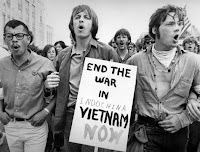 And what's more, the US was demolishing the communist forces until congressional interference, propaganda undermining popular support, and cultural shifts that ended up sending less than ideal soldiers over corroded the entire war effort. For the first years of US involvement it was like tanks against guys with spears. The Vietnamese communist forces were fine against antiquated French tactics and equipment but against the US they had no chance. The only way they had any chance of winning was to turn the public of the US against the war, and so they fought a war of survival and focused on America at home. And there, they won.

But the overall fight? The spread of communism was never like it was before 1972. After the Vietnam war, the Soviets and Chinese stopped trying to infiltrate and change countries through armed revolution by proxies. They still stirred up trouble, but they weren't acting publicly and openly, and they had cut back severely from what they were spending and attempting. The push to take over through armed revolt was stopped.

And that's what the Vietnam war was all about. It wasn't to save Vietnam, it was to stop communist imperialism, to stop the spread of communism through revolts in countries to create little communist colonies in the third world which would spread to their neighbors. In that, the Vietnam War was a total success.

All we hear is how Vietnam was horrible failure, how all those boys died for nothing, and how it was a massive triumph of the left to stop this evil enterprise which existed for no other reason than demented old men's fear of the red menace and the profits of the military industrial complex. The truth is, ultimately, Vietnam was victory.

For more reading on this, I recommend The Politically Incorrect Guide to Vietnam, Triumph Forsaken: The Vietnam War, 1954-1965 and Stolen Valor : How the Vietnam Generation Was Robbed of Its Heroes and Its History.

This is part of the Common Knowledge series: Things we know that ain't so.
Posted by Christopher R Taylor at 10:34 AM

The fourth bullet comment should be the other way around. Tet destroyed the South Vietnamese Communist true believers, afterwards the VC consisted of Northern infiltrators, not home grown commies.

I have since fixed it to reflect this fact, thanks belatedly for your correction