"Well, God bless them, and I mean God and Jesus because without Jesus we'd be Muslims too or Jewish, which would be a little better because of the superior Israeli Air Force."
-Fake Sarah Palin quote 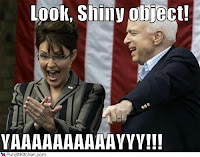 Sarah Palin is an interesting figure to me. Not because she's pretty or because she's conservative sounding, but because of what she does to people. Some consider her the goddess that walks the earth (although that's faded over time) and some consider her the worst possible human being that has ever lived. There are some, such as me, that find her interesting and somewhat admirable, but just a politician as well. But most are massively divided on her, with an extreme viewpoint.

And the left in particular were instantly repulsed by Sarah Palin. I think part of that was initially based on her being a charismatic, well-spoken, dynamic public figure who is able to articulate conservative ideals very well. She was a threat, and she had to be destroyed, particularly as a woman who dared to not be leftist. Yet at the same time, it seems almost as if there was a cultural side of it as well. Some people just seem to instinctively be repelled by Sarah Palin at a visceral, subconscious level. As if she stands for or represents something horrific and terrifying to them.

She's a rural figure who loves guns and uses rural slang. She sounds uncultured to them, tacky, like trailer trash. She seems like a Wal*Mart shopper, she probably even likes NASCAR, can you imagine?

And the myths about her grew up pretty fast. Most have been destroyed over time, like the "she said she can see Russia from her house" stupidity - Tina Fay said that, not Sarah Palin. But some still endure, and have been so effectively delivered that even Republicans and otherwise conservative people repeat them.

The biggest myth is that Sarah Palin hurt John McCain's candidacy. And history - very recent history at that - proves this laughably false.

The truth is, John McCain was trailing in nearly every state for months until he picked Sarah Palin as his running mate. Then, for a few weeks, McCain actually overtook Obama in the polls. It was a combination of effects, but Sarah Palin's addition to the ticket actually boosted McCain's campaign.


The Russian invasion and takeover of northern Georgia was a major factor as well. While Barack Obama said he wished everyone would just get along and tried to find fault in Georgia, John McCain plainly and unambiguously condemned Russia for the act, and people saw not just leadership but a clear moral compass. That helped him significantly in the polls. Still, he was lagging behind Obama.

But When John McCain picked conservative woman Sarah Palin for his running mate, things turned around. While Obama's convention announcement was hyped and gaudy (Greek pillars, etc) it wasn't very watched and he got no real polling bump. But the speech by Sarah Palin in the 2008 Republican National Convention set the GOP on fire, and the event was far more popular with viewers than the DNC. Sarah Palin's speech pulled in almost 2 more million viewers than president Obama's.

And there was good reason for it. Sarah Palin was little-known, interesting, attractive, and viewers were curious. And she knocked it out of the park, here's the speech in case you want to remember:

The full on opposition research and destroy Palin machine was already in place, but it was too early to make a difference in public opinion yet. She was dynamic, well-spoken, and looked great. She said all the stuff conservatives wanted said about Obama but McCain wouldn't. And for a while, McCain's polling numbers jumped. He took the lead in the race, until things went sour. I'm not making this up, I'm not spinning some obscure poll, every news organization on earth reported it, every poll noted the bump.

In other words: adding Palin to the ticket helped John McCain which is the exact opposite of conventional wisdom. The general agreed upon narrative now was that she was disastrous, ruined McCain's chances, destroyed him in the election. But the truth is, she took him toward victory, she jumped him up in the polls.

What killed McCain's chances - which were slim in any case - was the financial collapse and his response. He already was running a weak campaign and was unliked by just about everyone on earth, but the final nail was his response to the banking crisis.

People blame his "suspending the campaign" move, but that wasn't what did it. In September, after the RNC pushed McCain into the lead, suddenly dozens of major financers made a run on their investments and the banking crisis exploded. Why it started then is a matter of some speculation but nobody has an answer for the exact timing. It was in the cards for some time, building up, but what triggered this exact collapse at this moment?

Whatever did cause that, John McCain's response was to announce he was going to put his campaign for the presidency on hold and go to Washington to do his job as Senator to deal with the crisis.

The problem wasn't with the suspension of the campaign. That was noble and honorable, and drew a pretty stark contrast between him and Barack Obama who barely showed up in the Senate and did virtually nothing in the job except set himself up to run for president (after promising he wouldn't do so several times when running for the Senate in Illinois).

The problem was when he got to Washington, he didn't lead, he didn't show any strength, he didn't fight for the people. He just went along with everyone else, signed on to TARP bailouts for super rich and powerful banks, and had a big hugfest with congress. And that really annoyed people.

Had McCain stood up in congress and made it clear he was opposed to bailing out Citi and Goldman Sachs and the rest of these huge corporations who acted like complete idiots and wanted to not pay any price for it, people would have cheered. He had a chance to be the fiscal lion, to fight against government waste, to be the guy who drew the line. He had a chance to say "look, nobody is bailing out home owners and ordinary people, why should we do it for these incredibly wealthy bankers? This is wrong president Bush. We do not sacrifice free market principles to save the free market."

Instead he just went along. He looked worthless, and people turned against him. And rapidly the Palin destruction machine took its toll. She was demolished before she could establish who she was to the public. Instead of people finding out who Sarah Palin was, they learned what the left portrayed her as, and took it as fact. Her weak performance in some interviews didn't help matters, either.

It isn't that - say - Joe Biden was any stronger. He was even more hapless and stupid sounding. The problem is, people were interested in Palin and wanted to know more about her. The press carefully portrayed Biden as a foreign policy expert, the experience on the team. They portrayed Palin as an idiot, a hick, an inexperienced twit in over her head.

And for some idiotic, inexplicable reason, Sarah Palin's relative inexperience as VICE PRESIDENT mattered more to voters than Barack Obama's inexperience AS PRESIDENT in one of the most illogical, bizarre reversals in recent memory. The same people willing to give Obama a pass for having basically no qualifications for the job condemned Palin for having slightly more - she at least had experience in several executive positions. So its conceivable that eventually Palin would have been a drag on McCain's campaign, we'll never really know. But you can't really blame Sarah Palin for being misrepresented and demonized.

But Sarah Palin's addition to the ticket didn't hurt John McCain's chances. She was a major plus. he cut his own throat, as even MSNBC leftists on the Morning Joe admitted recently. What's odd to me is how completely this narrative of Palin being political poison took hold, so that even conservatives repeat it. Its amazing to me that something that happened such a short time ago has been so totally reversed. Big brother would be proud.

This is part of the Common Knowledge series: things we know that ain't so.
Posted by Christopher R Taylor at 8:25 AM

even conservatives repeat it

I think you will find that most of the people who repeat it are the RINO campaign consultants who botched Palin's introduction and subsequent handling in the press and now need to cover their respective backsides to avoid the blame they so richly deserve.